On Friday night, Nottingham played host to what can only be described as three of the UK’s most revered MCs. Hip-hop is usually an under-served genre in the city, especially on the domestic side of things, so when Blak Twang, Rodney P, and TY were announced to play Rescue Rooms it generated a tangible buzz in the city. With almost half a century of experience in the game between them, their Kingdem tour has given them a platform to show the UK scene how the originators do things.

First up was TY, who had the task of setting the precedent for the rest of the evening. Within the first two songs he was performing from inside the crowd and this energy soon got people involved. Next was Blak Twang. Straight away the atmosphere changed with a focus on the lyrics rather than catchy beats this time. Last, but by no means least, was Rodney P who I think received the greatest welcome of the three. The London Posse legend is widely regarded as the godfather of UK hip hop as we know it today, something that TY was keen to point out. As an end to the evening the three performed some new, unreleased tracks which indicates that we can expect new music soon.

To promote the tour the three MCs collaborated on a track, ‘The Conversation (We Aint’t Done Yet)’, which can only be interpreted as a statement of intent. This proved to be the only guaranteed tune on the night due to the extensive discographies of each artist. This gave the night an air of anxious trepidation and helped to build up the levels of excitement.

Upon the spinning of Blak Twang’s ‘So Rotton ‘and Rodney P’s ‘Live Up‘ the crowd became involved in the proceedings and the hosts were more than happy to maintain the high energy levels. With live hip-hop there is the unwanted possibility that an artist can slip into a slightly monotonous set in which energy levels remain low. This was not the case for the Kingdem. The quick rotation of the three MCs meant that the crowd’s interest remained high. Also Rescue Rooms’ sound system was more than adequate, which meant that you didn’t have to worry about not being able to hear properly. 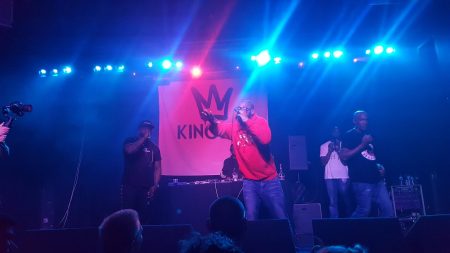 Unfortunately, there is a theory, often propagated by older, dare I say, overly nostalgic hip-hop fans that live shows aren’t as good as they once were in the late 90s and early 2000s. For the members of this bracket within the scene I can only recommend they try and catch ‘The Kingdem’ who have managed to breathe life into what is perceived by some to be an oversaturated genre. I think the fact that the gig was so well attended considering that next door AJ Tracey was performing at Rock City, shows that artists who musically still adhere to the core values of hip-hop are appreciated and remain to have a loyal audience.

Brexit and its Impact on the Food Industry