There's no strength in silence. 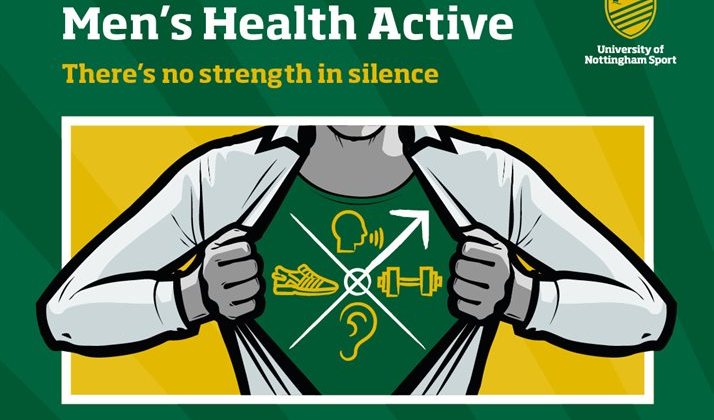 This Thursday sees the launch event of the University’s Men’s Health Active Campaign. The campaign is a new initiative designed to encourage male students to use sport and physical activity to help them maintain good levels of mental health. Any male student is invited to get involved with the events in March and April.

The event will be launched on University Mental Health day, Thursday 7th March, with a panel discussion and Q&A with special guests Etienne Stott, Olympian and UoN alumnus, Ed Tarlton, UoN alumnus and mental health advocate, and Andy Winter, Head of Campus Life at UoN. Following the launch event there will be a number of sports taster sessions to try. The event runs from 6-9pm at David Ross Sports Village.

Assistant Director of Sport Participation, Sam Bell-Minogue said, “The stigma attached to ill – mental health is slowly being broken down. Here at UoN Sport, we value the importance and positive impact that physical activity can have on improving mental health. Physical activity can help you sleep better, relieve stress and improve memory, all of which are crucial for students when studying hard. We want to encourage the male student population to recognise this and engage in our inclusive program that will provide a supportive network for those who are aware of their mental and physical health. We are excited to implement this program moving forwards”.

“Other symptoms, like self-harm, hallucinations and frequent panic-attacks all followed, leaving me exhausted, and in dire need of respite.”

Ed Tarlton, a speaker at the launch event, has spoken of his mental health problems he experienced whilst here at the University and how exercise helped him:

“Like illness or injury, a mental health issue is something that nobody asks for. However, whilst the former two situations may render us physically incapable of engaging in sport and exercise, this isn’t necessarily the case with the latter. That’s not to trivialise the debilitating effects mental health problems can induce. Indeed, I am well acquainted with those – encountering periodic bouts of anxiety and depression since the age of 19.

“Performance sport, I quickly established, was not going to be my answer”

Then studying at UoN – my first experience of these saw my mind plagued by relentless negativity. So much so in fact, that I would experience searing pains in my head, as though my brain was frying inside my skull. Couple that with frequent delusions of suicide, rather than grandeur and the cumulative outcome reduced me to a social recluse, caught between a state of either sleeping or merely existing. Other symptoms, like self-harm, hallucinations and frequent panic-attacks all followed, leaving me exhausted, and in dire need of respite.

A student athlete at the time, fitness was as much a necessity as a hobby and as my eventual recovery process gathered momentum; I began to seek other ways to cultivate positivity.

Performance sport, I quickly established, was not going to be my answer. For though I continued playing throughout my illness, the pressure and expectations weighed heavily, often undermining my enjoyment. Instead, I was forced to look elsewhere and it was when I increased my sessions in the gym, that I noticed a significant upward trend in my mood. The benefit, I realised, was the comfort derived from taking back some control, which had felt beyond reach in the deepest throes of depression.

At times like that, it can feel impossible to escape and reset the clock, which causes us to drift rather than act, but with exercise, I was able to take back some of the power I’d relinquished, by choosing to do something, rather than nothing. Going to the gym, going for a run – even heading out for a walk, all allowed me to escape the cycle of harm that my mental state had inflicted upon my depleted psyche. Combined with sessions I had with the counselling service, a new phase of thinking emerged – where I was no longer cast as a victim, but a fighter.

The result was monumental. My confidence, shattered by continual internal monologues of self-loathing and doubt, began to increase, to the point where I felt compelled to leave my comfort zone and try new things. As a result, I met new people, I had places to be, things to do and above all, I was living…not just existing.

I could end by saying this was all down to exercise. It wasn’t. The truth was and is, that it was down to me. Why? Because I found the strength to chose action, rather than inactivity – and only when you start making positive choices, will you see positive results.”

The launch event – free for all to attend, will be split into two parts:

6-7pm: Panel discussions and Q&A with special guests Etienne Stott, Ed Tarlton and Andy Winter. Light refreshments will be provided for all those who attend.

7-8pm and 8-9pm: The chance to try out some taster sessions including climbing, boxing, tag rugby, volleyball, weights based fitness class and basketball.

Here is the timetable of the weekly sessions and talk shops:

Head down to the David Ross Sports Village this Thursday to find out all the information you need about the campaign. If you need any extra information or help in the meantime, here are some useful links and resources:

Role Models: fashion favourites can be activists too