Israel Folau and His Homophobic Bigotry Have No Place in Rugby 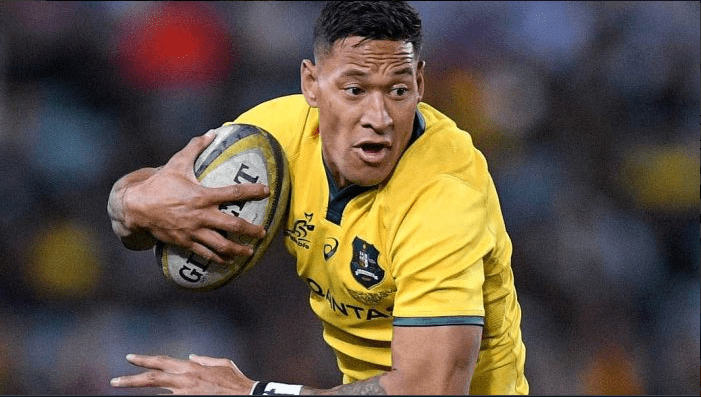 The rugby world has erupted in recent days over the controversy regarding former Australia and Waratahs winger, Israel Folau.

In a tirade of what can only be described as hateful and antagonistic posts on Twitter and Instagram, the rugby star announced to “homosexuals” that “hell awaits you” unless they repent their sins. Folau also listed “drunks, adulterers, liars, fornicators, thieves, atheists and idolaters” as people who would be damned unless they would repent. Alarmingly, this isn’t the first time Folau has expressed such views.

Folau remains unapologetic for his views, despite the public backlash he has faced since taking to social media to express his hatred towards those who live their lives differently to him. Since the infamous Instagram post, which with over 40,000 likes is his most popular recent post, Folau has refused to address the media.

Rugby Australia did not hesitate to separate themselves from Folau, and have since terminated his contract. The 30 year old winger will now be ineligible to play for former team New South Wales Waratahs, or any other Australian outfit. The Australian Rugby League Championship, the NRL, have publicly stated that he will not be welcomed back to play rugby league. Folau previously played for the Melbourne Storm and Brisbane Broncos from 2007-2010.

Rugby Australia tweeted last week that “whilst Israel is entitled to his religious beliefs, the way in which he has expressed these beliefs is inconsistent with the values of the sport….It is our intention to terminate his contract.”

Numerous voices from around the rugby world responded to the news with various reactions. Here are some of the most significant:

Some were keen to show their support for the Australian winger, such as England and Saracens number 8 Billy Vunipola. The Australian born back-row liked Folau’s tweet, and later took to Instagram to state that “man was made for woman to pro create that was the goal no?”

“Rugby should have zero tolerance for the divisive comments of narrow-minded individuals such as Israel Folau and Billy Vunipola.”

This post, which has still not been taken down, provoked the RFU to reportedly warn him that he could face similar punishment to Folau if he continues to endorse this message. His club, Saracens, issued a public statement clearly outlining that his opinion is “inconsistent with the values of the Club” and “contravenes his contractual obligations.” Though this post was perhaps less indignant than Folau’s, Vunipola nonetheless is using his platform to promote his own homophobic agenda.

Let’s take a moment to remind ourselves of the game of rugby and the ‘union’ it represents. It’s a game for all walks of life, all shapes and sizes, all races and ethnicities, all sexualities. Rugby should have zero tolerance for the divisive comments of narrow-minded individuals such as Israel Folau and Billy Vunipola.

In an exclusive interview with Talksport on Tuesday, rugby referee Nigel Owens – who came out as a homosexual back in 2007 – told reporters that “I’m glad that rugby has allowed me to be who I am, and that rugby is an inclusive sport.” The Welshman also made it clear that as a referee his attitude towards Vunipola and Folau would not change, despite their comments.

“I lost all respect for Israel Folau.”

Like many young rugby fans, I once revered players like Israel Folau; a player of such athleticism, a prolific try-scorer, a cross code player who established himself on the global stage of rugby league, Aussie rules football, and rugby union. But despite his brilliance on the rugby pitch, these comments are inexcusable. In light of these comments, I lost all respect for Israel Folau.

Unlike the blatant ignorance shown by Vunipola, there were some positive responses from around the rugby community,

His ignorance has been called out by many well known voices across the rugby world. Former Munster and Ireland flanker Alan Quinlan furiously questioned, ‘”who the hell is Israel Folau to tell people that they’re going to hell”, also referring to his comments as “bulls**t.”

Most notably Wales rugby legend Gareth Thomas, who famously became the first professional rugby player to “come out”, promptly reacted to this. Thomas has become an international spokesperson for gay rights, and sent out a more positive message tweeting that “happiness awaits you” as opposed to hell.

I don’t write this with hate or anger after Israel Folau’s comments.I write with sympathy. To everyone who reads it, don’t be influenced by his words. Be the better person and be YOU. Whoever YOU is..Hell doesn’t await YOU.Happiness awaits YOU.???

The former British and Irish Lions star, who reached 100 caps for Wales, previously described the moment he came out as “one of the scariest moments of my life.” Unlike Folau, the message he spreads is one of love, acceptance, and diversity.

Perhaps the most encouraging response of all came from All Blacks scrum- half TJ Perenara, who expressed his support for the gay community, tweeting that “I don’t even know what to say. You are loved. You are valued. You are enough. You are worthy. You are deserving. I got you.”

For me, this is the takeaway message from this ongoing controversy. Folau can spew out his hateful rhetoric as much as he likes, but not on a rugby pitch anytime soon.

Sea of Thieves: Is It Time to Take the Plunge?