The Turn of the Screw @ Theatre Royal 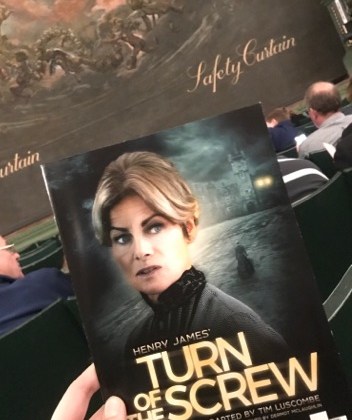 Based on Henry James’ gothic novella and directed by Daniel Buckroyd, The Turn of the Screw is a tale of lost innocence.

The tale retells the story of a governess who accepts an offer of employment which consists of caring for two children at a rural estate called Bly. However, the governess soon becomes convinced that Bly is haunted.

“I was extremely disappointed in the production’s effort”

Having seen many adaptations of the novella, I am aware of the capacity the text has to be extremely thrilling. However, I was extremely disappointed in the production’s effort. One of the novella’s greatest assets is its ambiguity and thus the scope of different interpretations that can be made. Instead of providing the spectator with the opportunity to explore different interpretations, the production forced the spectator to follow a very constricted linear narrative.

“The rural aspect of Bly, the house in which the novella is set was completely ignored”

The disjointed stone-like proscenium arch framed the minimal set. I was disappointed in the minimalistic set. Being an avid member of the British aesthetic movement, James provides rich descriptions of Bly and the surrounding landscape in his novella and I don’t think the production encompassed this detail. The set consisted of a few chairs, a table, a bed, a rocking chair and a rocking horse. The rural aspect of Bly, the house in which the novella is set was completely ignored.

The production merely projected shadow-like images of the apparitions to the back wall of the set. The fact that the shadows were not actual moving actors was off-putting and made the production seem extremely wooden. This also prevented the production from achieving the excitingly terrifying nature of the novella.

The scenes that were supposed to be scary actually made me cringe. Quite often, the actors would react to supposedly scary sounds before the sound was actually projected. Moreover, these sounds were projected at extremely predictable moments, which prevented the production from achieving the disquieting effect that the novella achieves. Moreover, the use of lighting and sound could have been utilised more to achieve the necessary terror that the novella conveys.

The novella is written as a frame narrative, with the prologue beginning with an unnamed narrator listening to the character of Douglas who recalls a manuscript written by a former governess. The production, however, changed this framing device. Instead, the production began with the older governess (Janet Dibley) talking to a disguised and older Flora (Amy Dunn), one of the children that the governess previously looked after.

Once revealed, Flora confronts the governess about the events that occurred at Bly and prompts the governess to provide her with a true set of events. Therefore, throughout the production, Flora’s gaze on the governess’ past actions operates as form of scrutiny. I don’t feel as though the production benefited from this change in framing; the change actually encouraged a specific, therefore limited, interpretation of the production.

“There was no real distinction between older Flora and young Flora”

However, since Flora’s gaze is constant in order to present the scrutiny element that the production seemed to be presenting, there was no real distinction between older Flora and young Flora. On occasions, Flora would change her voice to resemble a childish tone. I found the use of adult actors playing children quite disconcerting and uncomfortable. The childish tone adopted by Flora contributed to the overall acting being rather wooden.

“Costume Supervisor, Ella Clarke should be commended for her excellent costumes”

Costume Supervisor, Ella Clarke should be commended for her excellent costumes. The governess’ long skirt, matching jacket and hat, as well as Myles’ waistcoat located the production perfectly in the height of the Victorian fin de siècle.

Overall, I was underwhelmed by the production. The failure to utilise the vast possibilities of lighting and sound, as well as consistent wooden acting, resulted in the production failing to grip and thrill the spectator as James effortlessly does in his novella.