Recently I sat down with the President (Jonathan Williams) and Development sec (Gianluca Scatto) of Film Making Society to discuss their plans for the new academic year.

And boy, does it sound exciting.

Q: So for the newbies in Nottingham, what does Film Making Society offer?

Jonathan: We meet every week to write, produce, film and edit a whole bunch of short films over the course of the year. These typically come in two week projects. 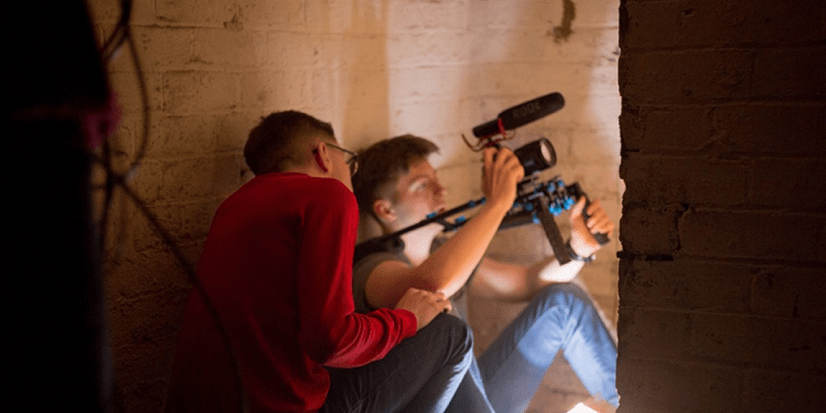 Gianluca: In the first week we meet up, write a script based on a specific theme and plan a shooting schedule. The following week individual groups will go out and film their micro-films, which are then edited for the next session, where we watch the final products.

Q: How accessible is FMS to people with little to no film making experience?

Jonathan: We have people with all kinds of experience.

“We’ll be running a FREE taster session on Thursday 26th September from 6-8pm.”

Gianluca: These two week projects are particularly good for learning new skills, as every couple weeks you can try your hand at different aspects of film making.

Q: What other benefits does being a member have?

Gianluca: Every two weeks we run a workshop where you learn more about the fundamentals of film making, such as writing, editing, camera movement or something that you’d need to know as a competent short film maker.

In terms of external opportunities for our members, there are openings to film videos for other societies as well as paid work such as filming for Crisis Wednesdays – you get fifty quid for producing a thirty second promotional video. With all this you get trained up by one of the more experienced members.

“It’s hard work but it’s so rewarding to have made a short film in such a compressed amount of time. It really does have you thinking outside the box.”

Jonathan: As well as this, you can use the society’s equipment for your own projects. One of the great things about FMS is that you meet like-minded young film makers, who can make shorts with you throughout the year. I personally have made my own micro-films on the side, which other members have been kind enough to be a part of.

This all comes with the price of the society membership, which is relatively cheap at £5 for the entire year!

Q: What events are held in the society throughout the year?

Jonathan: One of the main events that we run a couple of times throughout the year is the twenty four hour film making challenge. This is by far our most popular event – for good reason. It’s so much fun.

Gianluca: I attest to that.

Jonathan: Basically within twenty-four hours you have to, as a group, come up with an idea, write a script, and film and edit it. It’s hard work but it’s so rewarding to have made a short film in such a compressed amount of time. It really does have you thinking outside the box. Even as a non-member you can take part, albeit for a slightly increased fee.

I’d highly recommend that anyone interested in film making come and check it out!

Jonathan: These events will really sharpen your skills too.

Q: What does the society offer in terms of socials?

Jonathan: We run a variety of socials throughout the year – we’ve done nights out to clubs such as Rock City, Crisis and also Prysm. These often come as celebratory moments after the completion of our larger shoots. We also regularly, after our weekly Monday sessions, head down to Mooch to relax. Typically we also run house parties early on in the year as well.

Gianluca: If you’re not an alcoholic like most university students there are also socials that might appeal to you. We go bowling, among other things. Also, you also don’t have to order booze at Mooch – you can be there and be square.

Q: For anyone wanting a taste of life at FMS, are you running any taster sessions?

Jonathan: We’ll be running a FREE taster session on Thursday 26th September from 6-8pm. We’re gonna split you guys into groups to spend a couple of hours filming a scene with our guidance – don’t worry, we’re not expecting any masterpieces!

Gianluca: It’s a fun way to meet new people at the university and for you to very briefly try your hand at one of the film making roles in the process.

Jonathan: We’ve had past members work with video production companies, TV companies, with some even working as photographers – you gain quite a versatile skill set as a member.

Gianluca: We’re really excited for this year, so – regardless if you’ve even touched a camera before or not – come along to our taster session!

Regular sessions run in the Teaching and Learning Building every Monday from 7-9pm.

Self-Care at University: Putting Your Health and Wellbeing First

A Guide to a Night Out in Nottingham