The Negative Side of Body Positivity: Whitewashing

Once upon a time, the words “body positivity” used to relate to people like Lady Gaga and her epic meat dress (which has its own Wikipedia page by the way), just because she expressed herself. Did you know that women experience an average of 13 negative thoughts about themselves every day in which 97% are about their body?

You’d think it’s because of societal depictions of “ideal” women, who are apparently “thin”, “tall” and, unsurprisingly, white – but people started scrutinising their bodies before the Internet even existed! This self-examination dates from the Victorian Dress Reform movement, which advocated for women to adopt a certain body figure by use of corsets and body mutilation, to the Body Positive movement proposed in 1996.

Nowadays, floods of people are no strangers to body positivity, as society has come a long way in attempting to create a comfortable place to feel at home in your body. I’m not saying that body shaming has stopped, because it definitely hasn’t. Somehow, even though many people have started to realise that their words hurt others, many people have thought of even more unique and interesting ways to insult people.

One thing media platforms forget is to represent women of colour

Countless movements flood the media about body shaming and the effects it has on people’s lives, but one thing media platforms often forget is to represent women of colour. People of colour are slowly surfacing in the media and in campaigns sharing their stories of accepting their body and their journeys to get there, like Jameela Jamil, Mindy Kaling etc.

I mean all this is great, but when will we start realising that mainstream body positivity has actually failed us? What about Sonya Taylor, Kelvin Davis, or Ashleigh Shackleford, whose names get lost amongst entire demographics of white people?

We have started to side-line black people who don’t fit the white attitude in the media. By this I mean, people who suck in their non-existent fat and whack #Bodypositivity on their Instagram feed. Somehow, we were able to demonstrate racism towards black people, even in campaigns to promote positive journeys of self-love and acceptance by having the ‘token’ black model to show: “look at us being diverse”.

But why are black people underrepresented in body image positivity campaigns? Why are conversations centred so thoroughly around white women? Has the liberation for all body types become whitewashed?

After conducting a poll, 73% of a group of 70 people felt people of colour are underrepresented in body positivity campaigns. 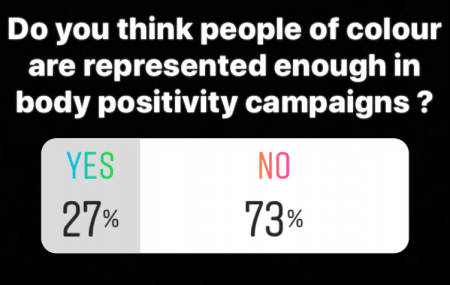 Only 31% said their race was represented enough in body positivity campaigns in comparison to the 69% that ultimately did not. 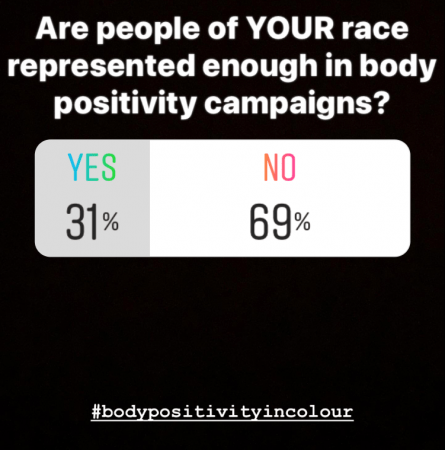 16% felt discouraged when they saw a body image campaign represented by a woman of a different ethnicity to themselves. 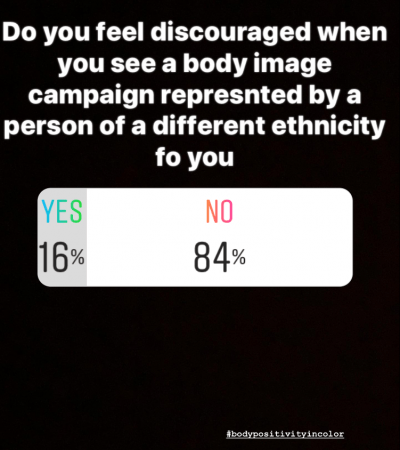 What does this tell us? Are we accepting of dark-skinned female advocacy, or have we not seen enough representation in the eyes of the mainstream media to even have an opinion?

Advocates of varied body types have been the key to opening a well needed discussion about accepting your body and breaking the stigma of a “perfect” body. But how can we love ourselves when the media constantly underrepresents women who are inconsistent with society’s schema of idealistic skin tone, in comparison to their fellow Caucasian activists?

Simone Mariposa expressed her feelings that “body positivity right now is centred around women who are still conventionally desirable.”

As a woman of colour, you often find yourself perplexed as to why there isn’t such a person in any shape, skin tone or form to represent you. Black model Simone Mariposa expressed her feelings that “body positivity right now is centred around women who are still conventionally desirable.”

I mean, we know about Jameela Jamil and her fantastic work, which is constantly flourishing with the help of her powerful media platform, but have you heard about Stephanie Yeboah, who actually set the basis for Jamil’s work, with her hopes to normalise different body shapes and advocate dark-skinned Black people?

Media praises actress Rebel Wilson, who is applauded for her “chubby” body type and claimed that she gained extra weight to get laughs as a “route to comedy”. Though the media is celebrating her for her confidence, she still fits a preconceived “white canvas” to represent the changing view on body positivity.

What about the people who actually live outside this “white, slim, holding a pizza and calling it a cheat day” spectrum?

Black actress Gabourey Sibide, is verbally berated by paparazzi and online repeatedly because of her size and dehumanised because of it. What, so she can’t represent bigger bodies because she’s black? Why is singer Lizzo “brave” for being so confident? Do you have to be brave to love your body?

Women are trying to love their bodies more, but again, society makes an attempt to make us feel like only thin Caucasian people have that privilege of self-love and improvement.

What about the people who actually live outside this “white, slim, holding a pizza and calling it a cheat day” spectrum? Media airbrushes realistic black body standards and neglects huge demographics of black women. We need to override the stereotype of representing black women as “big”, “sassy” and “loud” and ultimately replace it with “big”, “tough” and “persevering”.

If those adjectives can easily be applied to Caucasian women, why not to black women? They deserve to feel beautiful too. They need fair and equal representation in ordere to drop the marginalised perception. Like Stephanie Yeboah claims “black fat women matter too.”

It’s Black History Month. Change perceptions and celebrate beautiful skin and bodies! Fill your Instagram feeds with actual people, let people with more “marginalised” bodies have a say for once!

Featured image courtesy of @nerabouttown via Instagram. No changes were made to this image.

Fast-Track your way into the Charity Sector: An Interview with Charity Fast-Track Foundation Course