My Chemical Romance: Time to Re-join the Black Parade! 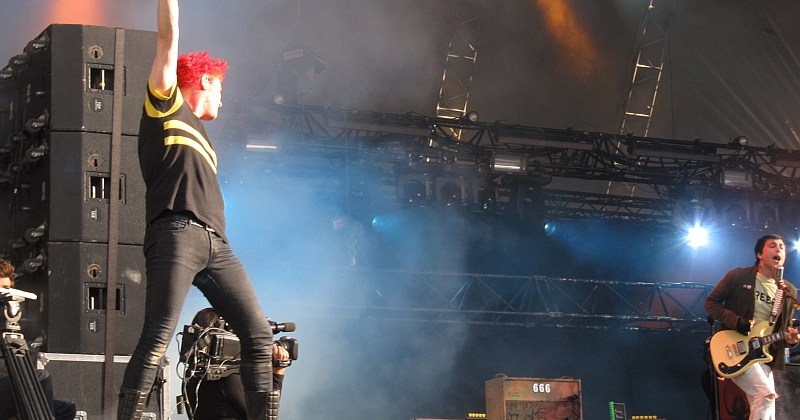 Another casual day of studying and then my Twitter explodes with the recent announcement that My Chemical Romance are reuniting and going on tour.

I’m confused. Is this really happening or a way of creating a Twitter boost for MCR?

Growing up when pop punk was at its peak, life was golden

Yes, you heard correctly – they are most definitely going on a tour- with their first tour dates announced in LA and Australia and tickets selling instantly.

Being a noughties kid and growing up when pop punk was at its peak, life was golden. It isn’t just me who gets excited when MyChem plays – it is prominent in any young adult’s life, when MCR were hitting all the right notes.

It’s the music which tells you to stick at it even when life keeps pushing you down- and everyone knows at least one of their infamous lyrics.  I wouldn’t claim that I was a rebellious kid,  but I was one who loved the alternative music genres available.

Let’s take a rewind back to the years when MCR were releasing songs left, right and centre and reminisce over their classics, ahead of their announcement for their UK tour dates. The list is endless and some of their iconic songs (that I truly love on the days where I want to stick it to the world) are not on here, but I am more than sure everyone has a good time warp moment with at least one of these songs.

This takes me back to when I was in my teens where I was starting to challenge adults and getting to grips with what I wanted to do. At that age, you have the freedom and excitement to do anything and everything and adults just never understood that.

The guitar jumping in towards the end… the head bopping comes naturally.

The idea of consequences was just not a thing; confronting a teacher in class, raising your voice to parents, it felt like you could get away with anything if you could shout the loudest. Then again, I always thought adults just never understood us. It was the inclusiveness that came with no one really understanding us.

Welcome to the Black Parade

This song encourages you to yell, despite the things that are getting you down, from the top of your voice

This is a song which takes me back to a point where gothic art was amazing. I can’t even pick a few classic lines for this one, as it talks about the sad depressing idea of losing someone whilst still being able to “carry on”. The marching band, the build up with the drums and the guitar jumping in towards the end… the head bopping comes naturally.

The mosh pit was made for this song. You will never be able to forget the multiple themes of empowerment, of still being lost and scared in this world, and that we’re all in the same boat.

Having a bad day? Need to get stuff done but feel like crap? This song gives you that energy that you deserve it all and you will not stop at anything. The classic line “if my velocity makes you sweat, then don’t let go” is one that reminds me to go at my pace and not stop for anyone. It makes you get up and say, ‘I’m going to do this, and I won’t go home until I’m done.’

For a pop punk band, even their saddest songs brings a sense of motivation when you feel like you can’t escape from the harsh reality of the world. This song encourages you to yell, despite the things that are getting you down, from the top of your voice. It helped me to remember that hell yes, I do have a voice, and I don’t need your motivation; I am getting my voice, this is my time. I will not stop until it’s heard so no one is going to stop me.

Featured image courtesy of Ida A. via Flickr. Image license found here. No changes were made to this image.

In article image courtesy of @MCRofficial via Twitter. No changes were made to this image.

Album Review: Umbilica – Where The Land Meets The Ocean

Who Put The ‘I’ In International: Is English Really The Global Language?