Poppies – A Symbol of Pride? 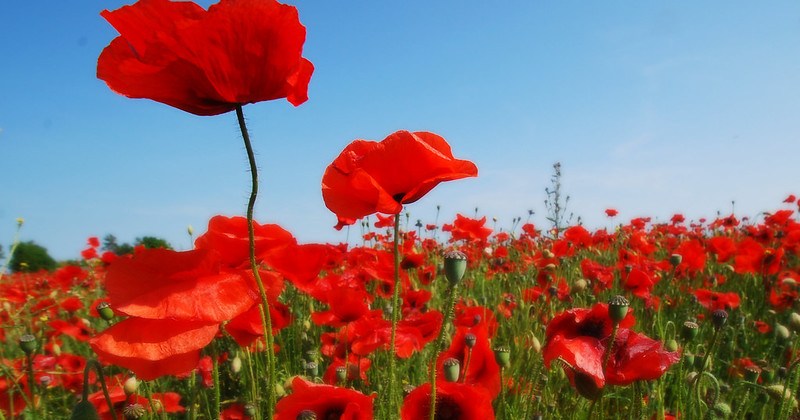 Last year a member of the Doncaster Pride community came up with an innovative idea to remember soldiers who would have been considered part of the LGBT community. Doncaster Pride posted on Instagram in 2018 (before being deleted) a poppy that had a rainbow on one of its petals.

Immediately, there was a lot of backlash, and an argument erupted –  Doncaster Pride were being accused of not only defacing the century old poppy appeal, but were accused of hijacking the core meanings behind  Remembrance Day.

I’m an out and proud bisexual but I won’t wear a rainbow poppy. The poppy is about remembering the soldiers that fought and laid down their lives so we could live. Yes there would’ve been lgbtq+ soldiers but remember them as people not just as their sexuality #poppy #rainbowpoppy pic.twitter.com/BrbJlf6D5o

This was completely off the main aim and caused much distress for both the protestors (who cared about the original red poppy’s symbology remaining intact) and the Pride community (who were called selfish for making the day all about themselves).

The typical red poppies are worn around the world for November 11th, there have been deviations which date back to 1934

The main misconception that everyone seems to have about the Pride poppies is that the idea is to make Pride a dominant topic in the current world, and that we keep wanting to promote it. The reality is the complete opposite; Pride has been celebrated all over the world and is being incorporated into our normal daily lives.

Although, the typical red poppies are worn around the world for November 11th, there have been deviations dating as far back as 1934. The red poppy was chosen as the poppy to represent the soldiers who fought in the war, and the infamous Flanders Field was populated with these significant red flowers. The red stands out, for the blood shed on the battle fields.

However, the Peace Pledge Union also produced a white poppy to represent the pacifists, the women and children who suffered; a symbol for all, whereas the red poppy is associated with the military.

Likewise, a purple poppy was introduced in 2006, for the animals who are affected by war. Animals do not have a choice in whether they are chosen for war and are often in worse conditions because they are not humans; they too deserve to be remembered. So why are we ignoring the people who have also suffered at the expense of their sexuality?

Do they not deserve a poppy to be remembered for the even harsher reality that they had to struggle with?

Many people forget the likes of Alan Turing, one of the most important figures of WW2 history, was treated badly after helping to make a machine  to solve the Enigma. Do we forget how he became victimised because society classified being homosexual as being wrong? Do we forget that the government dosed him with drugs and made him feel less like a man, even though his creation saved many soldiers’ lives?

I personally feel for that alone he should be remembered, and it is not just Turing that helped – what about people like Wilfred Owen, Siegfried Sassoon? In a time where being openly homosexual was like asking to be killed, do they not deserve a poppy to be remembered for the even harsher reality that they had to struggle with? I think that they deserve the same respect as the white and purple poppies that are part of the Poppy Appeals.

The main reason why the Pride poppy has been in the news is the fact that no one really hears about the white or purple poppy. Most think the red poppy symbolises all, but when looking into the finer details, it only considers families who fought directly in the wars.

All this kicking off about rainbow poppy. How’s it any different to say the football club ones? Is it not effectively just showing your respect while demonstrating your beliefs?! And after all football is pointless but nobody kicks off about those?! #Poppygate #poppy #pridepoppy pic.twitter.com/0r9r0F2EWU

Surely, we should be embracing all the poppies, as all lives are important whether it is a bird, horse, homosexual, heterosexuals or children who were affected by living near the battlefield. They all deserve the remembrance and the fact we have three different poppies that already are in circulation, a deviation to a rainbow poppy (for the completely hidden people who were not open about their feelings) is not the worst thing in the world.

We need to re-educate people about the different types of poppies in existence and remember the bigger picture – not just those who fought in the war, but also those who were affected indirectly, like families who helped look after the evacuees. We need to remember all affected and arguing about a rainbow poppy isn’t the way forward.

We are losing sight of what the main aim is and how the Appeal was not just set up to commemorate lives. It was set up to look inside ourselves and realise that we can become better people; that we can look after ourselves, have disagreements with others, but still find a peaceful and calm solution to our problems (on a local and global scale).

Regardless of the backlash, the campaign is still relevant in 2019 and is standing strong against the naysayers.

Featured image courtesy of hennasabel via Flickr. Image license found here.  No changes were made to this image.

In article image 1 courtesy of @LovedLiability via Twitter. No changes were made to this image.

In article image 2 courtesy of @MarkHJ2 via Twitter. No changes were made to this image.

Who Put The ‘I’ In International: Is English Really The Global Language?