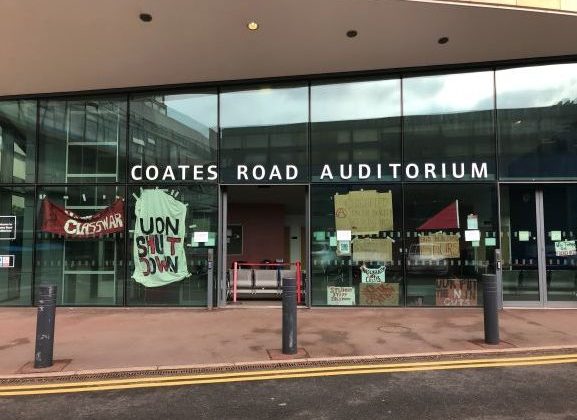 Signs and banners pinned to the inside of the Coates Auditorium windows showing student solidarity for UCU strikes.
0 March 10, 2020 15:50 by Aidan Hall

A group of students, made up of members from the Left Society, Socialist Students Society, UoN Marxist Society and Labour Students, have occupied the Coates Auditorium Building this morning.

The occupation comes in the wake of ongoing strikes by the Union of Colleges and Universities (UCU) that have taken place since the 20th of February.

One participating student told Impact that he and others had entered the building at around 18:00 on Monday evening. They proceeded to block the door with a large bench and post signs in support of the UCU strikes.

“In the interest of staff and students, it is imperative that the management of the University of Nottingham meet these demands immediately” – UoN Solidarity

The occupation is intended to continue for at least another three nights as a part of the ‘4 Fights 4 Nights’ idea. This is inspired by the ‘Four Fights, One Voice’ slogan used by the UCU.

The four fights reflect the same number of charges that the UCU have made against universities nation wide. These include grievances around pay, equality, workload and casualisation.

In a statement made on Facebook by UoN Solidarity, a group of students supporting the UCU strikes, they said that “In the interest of staff and students, it is imperative that the management of the University of Nottingham meet these demands immediately.”

When Did Feminism Become Trendy?

Can Climate Change be Averted?