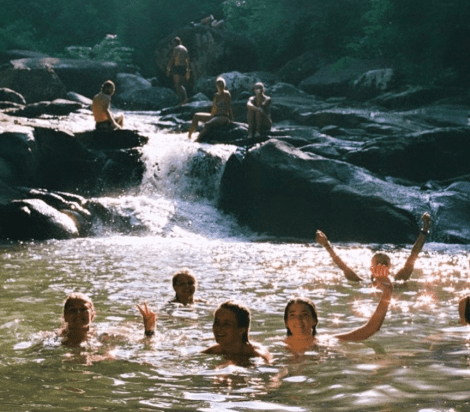 Our first trip venturing outside the gates of Univillage, our university accommodation in Semenyih, entailed nine newly found friends adventuring to the tropical island of Tioman, Malaysia.

After a lengthy journey involving an hour taxi ride to Kuala Lumpur, a five-hour night bus to Mersing port and a very turbulent two-hour ferry, we finally sunk our feet into the elegant sand of Tioman.

We thought the demise of the trip would be getting refused a boat ticket in Mersing port to the island; considering our passports were still in the hands of the visa office in Kuala Lumpur. However, this turned out to be the least of our worries as no more than twenty-four hours after we set off on our trip to the island, disaster stuck on the foot of a mountain slope and two of us were suddenly rushing our friend to hospital; if there even was a hospital to be found on this remote island.

The first morning on this beautiful paradise was spent paddle boarding, having a beer with the owners of the beach shacks we were staying in and drinking out of fresh coconuts. Life seemed like it could not get any better. Feeling enthusiastic, in the evening someone suggested taking a hike up to the local waterfall and going for a swim before sunset. The trek was hearty but worthwhile as we reached a glittering oasis at the summit of the small mountain. I was struck with panic as I watched some of my friends suddenly leap off the slippery rocks of the waterfall into the glistening pool of water. However, this anxiety was only to be a foreshadowing of the disaster that was awaiting us.

Having dried off, we were eager to get back to the beach huts to order some well-deserved dinner from the local bar. Our friend Niamh seemed particularly eager and was starting to gather quite a speedy pace. She appeared rather proud of her brisk momentum and laughter filled the air as her legs seemed to have a mind of their own. Niamh’s comical pace elevated laughter into hysterics.

However, before we could finish our jokes about this eagerness, her pace had geared up from speedy to extremely rapid and the slope which we were trekking down appeared to escalate in depth. The hysterics transformed into screams as Niamh’s legs appeared to be trembling in a frenzied sprint towards the cliff edge. Thankfully, she was able to stop herself from falling off the edge of the cliff by putting her arm forward and forcing herself to drop down onto the ground. However, this sharp strike to the ground left her arm bent in an immensely painful and unnatural position.

Some of our friends went to get help from the owners of the beach huts, and Niamh was transported in the side cart of a local’s motorbike down the remaining mountainside and across multiple rivers. The owner of the beach huts then drove us to the only local hospital on the island with Niamh’s arm in a t-shirt sling and Stormzy playing at full volume at Niamh’s request as a distraction from the pain. However, after the hut owner told us that ‘the doctor on this island let my best friend die several years ago and is always too busy sleeping’ in a confusingly humorous tone. We ourselves did not know whether to laugh or cry at this point.

Niamh was eventually injected with three different solutions and her arm was placed in a linen sling by a trainee nurse, so hope was on the rise. This hope plummeted when the nurse concerningly informed us that he actually did not know what he should be injecting and asked us if we knew any better than he did. After some further translation issues and a few more questionable injections, the doctor of the island arrived and told us to travel straight to Kuala Lumpur hospital as he thought Niamh had either fractured or broken her arm.

We all went home and slept for two days straight

This would have been simple if Kuala Lumpur was not a turbulent seven-hour journey away. However, Niamh trooped through the seven-hour journey and another twenty-four hours later after being emitted and discharged by several different hospitals in Kuala Lumpur due to insurance issues; Niamh’s fractured arm was finally put into a moulded cast and we all went home and slept for two days straight.

All images courtesy of Jodie Clare.