Can A Growing Population Be Sustainable?

The United Nations observes World Population Day on the 11th of June. In 1989 this day was known as the Day of Five Billion. In the years since, our population has continued to grow to 7.8 billion today. Is it possible for a sustainable future with this continued growth? Impact writers Rian Patel and Roma Coombe argue the case for both sides of the debate.

Our Growth is Unsustainable

Our historical population growth has been exponential. GCSE Geography knowledge tells us there are many factors that control a population’s growth: improvements in medication, contraceptive use, transition from rural to urban lifestyles, emancipation and education of women, and many more explosive factors.

Despite this, the world population growth rate is the lowest is has been since the 1950s, when proper recording began. The peak growth rate was in the 1960s at over 2% per year. We are now at 1.05% growth per year. UN predictions suggest that we may never reach a stage where a 12 billionth person is born.

The global growth rates only tell part of the story. To fully understand we need to hold a magnifying glass to the details of individual countries. The differences in the populations of every modern-day country are due their unique set of histories, resources, and cultures. As every country develops through demographic changes, so will more advancements for humanity develop.

This is due to what the UN refers to as the ‘demographic dividend’, and can be very valuable to a country. As those of working age outnumber the rest in developing economies, more budding brains and agile bodies can contribute to different fields. This can lead to faster economic growth, and thus substantial changes in the living conditions and economic outlook for the people. This has already successfully occurred in countries like the UK and USA historically, and is taking place at present too.

Countries like India, Bangladesh, Iran and many more have recently transitioned through population structures to have a strong youthful workforce that will rapidly develop the economies in the coming years.

If the growth rate is slowing and demographics are shifting to be more economically prosperous, then maybe there no real threats of overpopulation at all. So, why can we make the case that the growth remains unsustainable?

To quote Gandhi, “The world has enough for everyone’s need, but not enough for everyone’s greed”. In other words, it will not be the number of people that will be unsustainable, rather how this number choose to live their lives. Their lifestyles and consumption of resources will be the determining factors of whether the world will be burdened with an unsustainable human population. The lifestyles we enjoy in the West are seen as the pinnacle of what other countries want to achieve. That will come at an unsustainable environmental cost, taking a toll on our planet and climate.

It is a subject of much political debate as to which nations should take the most responsibility in fighting climate change. Europe, North America, and Australia face accusation. Global Energy consumption per person is the highest it has ever been and disproportionately higher in Western nations. While renewables are being used, they are still in the minority of energy sources. Therefore, the climate emergency will become an ever more pressing issue. Human demand for energy through internet, cars, household appliances, and more needs to radically and rapidly change if we are to accommodate up to 10 billion people by 2050.

Our water management is also becoming a serious issue in a growing number of places around the world, and an increase in population will exacerbate this further. At the start of 2018 Cape Town, South Africa were three months away from ‘Day Zero’, when they would run out water. This time it was fortunately mitigated.

Other parts of the world are facing the same damning prospect unless things change. Water stressed areas could affect up to 4 billion people by 2030. Energy and water management need a serious rethink worldwide. This is made harder for world’s poorest (such as nations of Sub-Saharan Africa) as they also face issues of poverty, illiteracy, and in some cases war, and are simultaneously baring the fastest growing populations, too.

Although our population growth alone may not be a risk to the planet or to people’s pockets, how we deal with providing for these people may be. We are already using precious resources at an alarming and unsustainable rate. Adjusting our lifestyles will avert disasters we do not feel today, and that is a very core idea behind sustainability. However, make no mistake that a population growth like this will be unsustainable in the future, for it will exacerbate global issues unless we change our resource and energy management. 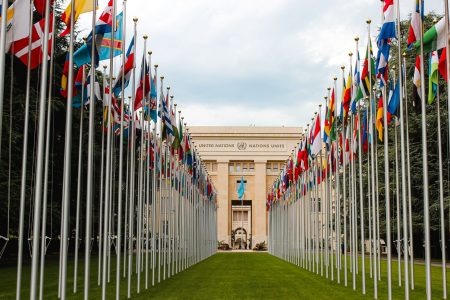 Our Growth Could Be Sustainable

A sustainable society is one that ensures the health and vitality of human life and culture, and of nature’s capital, for present and future generations. Our rapidly increasing population strains every aspect of development, from agriculture and food production to infrastructure and societal capabilities. However, technological advancement would allow humans to stay ahead of the issues arising from our population growth. Scientific and technological knowledge (GM crops, seed breeding, bioengineering) allow us to further utilise land and expand our ability to cope with larger populations. The political economist Henry George would have described this as humans using their brains to “leverage the reproductive forces of nature to their advantage”.

The population growth rate is not necessarily the issue

The demographic transition model shows that countries can develop to the ideal stage 4 categorised by lower birth and death rates. This stabilises population growth by forming stronger economies, more highly educated citizens, and functional healthcare systems. Advances in public health and modern contraception have already led to a dramatic drop in fertility and birth rates in developed countries and if more strictly implemented could restrict geometric population growth. The United Nations predicts the present growth rate is sustainable for at least another century, considering our present technological advances.

Although the population is still growing, the global rate of growth has declined to 1.05% in 2020 from a peak of 2.1% in 1968, with predictions suggesting it could be as low as 0.1% by 2100. Thus, the population growth rate is not necessarily the issue. There is a disproportionate distribution of the population concentrated on lower income countries (LICs). This means the resources and economic support required to sustainably cope with the population growth are in the wrong places.

High income countries (HICs) rely on the over-exploitation of many LICs to maintain their status. Therefore, the LICs are very unlikely to be able to develop to the stage where they can focus on sustainability over survival. These lower income countries will receive the full force of the impact of rapid population growth, as they can not and have not been enabled to become developed enough to bear the consequences of an increasing population.

In a scenario with no interventions, the exponential population growth would occur until the Earth reaches its carrying capacity. This is a theoretical limit decided by factors such as limitations in food, competition for other resources, and the likelihood of disease. If this were to be allowed it would be bad news for humans as it would be unsustainable to keep on growing, so people start dying.

However, we live in a world in which interventions are possible. The solution, therefore, lies in global cooperation to distribute resources evenly and implement policies and measures to ensure a more sustainable development. This could mean significantly reduced standards of living for developed countries. The average American uses about 9.7 hectares of land (for growing food, textiles for clothing, supplying wood, and absorbing waste). The Earth, however, has a finite resource of 1.9 hectares of land per person. Such distribution would entail some sacrifice from developed countries. However, if methods are employed to increase the efficiency of this land-use, and individuals are altruistic and cooperate, a sustainable society may be achievable for the rapidly growing population.

Lewis Hamilton Is Leading Formula 1 Towards Diversity, But He Shouldn’t Have To

The Return Of Primark: Novelty Or Necessity?