In light of the new term and fresh starts for everyone, we gave our contributors the theme of ‘beginnings’ for this month’s creative showcase. Here is the writing and artwork that they came up with! 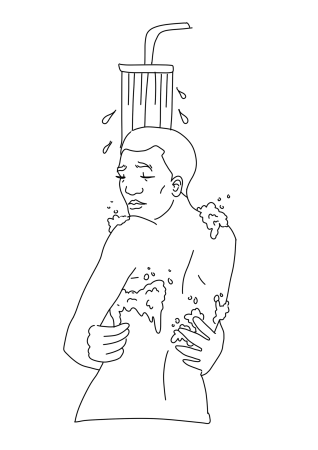 Realising that you are the sum of your experiences.

Experiences that have coloured all the sex you’ve ever had,

It’s really hard to realise that you’re the problem.

it’s not your fault.

But you’re just a sum of your experience right?

And some of your experience just happened to fuck you up.

Last night I realised that waiting for someone to love you

is a waste of your goddamn time.

I want him to be proud of me,

to do with my life is real.

I’ve spent my life crying when he doesn’t reply.

I was stronger when I was younger.

Peel back the layers of hurt and walk out a new woman.

Or maybe just as the girl I used to be.

The girl who told him to fuck off.

The girl whose independence was her most important possession.

I want to be that girl again.

I want every way he ever hurt me to be washed from my skin.

I don’t want to be the sum of my experience anymore.

I don’t want to be the daughter of my parents.

I don’t want to be a pawn in his game. 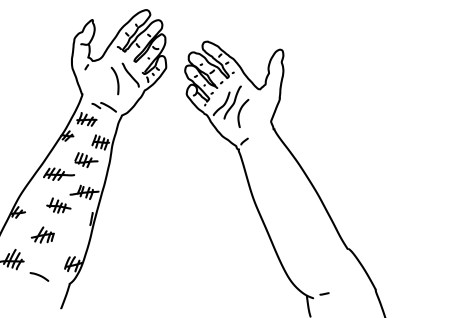 Gotta set the counter back, but

I’ve done it before, and I’ll do it again.

I’m just back at square one.

Not square one exactly but

And I know that tally marks on my skin

Grieve everyone around me but I-

Ah, damn it. It feels better then when

I hurt with no possible way of expressing it.

Numbness is a brief respite at least.

All this work can’t be for nothing, there’s

No crying in baseball and no slacking in cutting.

Don’t start again unless you don’t mean to stop.

Add up the successful days, and count victories

Great, but a single loss makes it all meaningless.

Nineteen months isn’t bad, but it’s not not cutting at all. 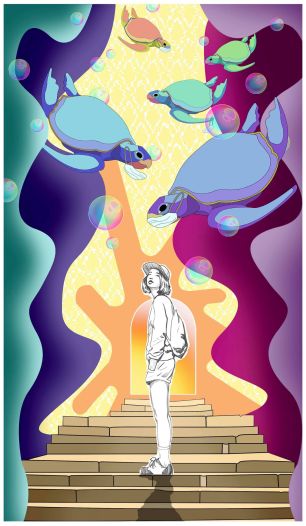 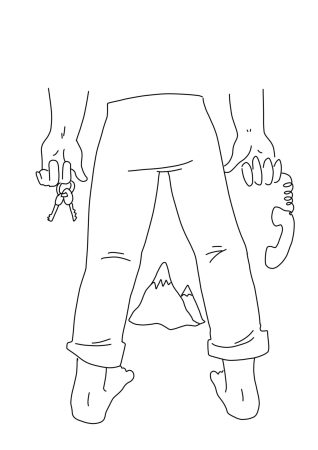 We begin where we must; where we can; where we might not want to, but often need to. When facing insurmountable odds, we must find our first footholds in the rockface.

We begin at the end of things, when there is nothing more to be done. When all the doors have closed, and all the concrete roads fade into uneven fields, it is then that we must begin again.

Beginnings are found sat in the driver’s seat with your bags packed and piled behind you, hands on the steering wheel, keys in the ignition, but the engine silent. Beginnings are found in the leaps of faith – in the flick of a switch, in an unlikely pick, in the choices you never thought you’d have to make.

Beginnings are found in the goodbyes, in the letting go, in the acceptance that once you leave, it’ll be hard to find the way home.

Beginnings show themselves in the ‘hello’s, in the chance meetings, the memorable greetings. In the consequences of the ‘could have been’s, and the reflection of the ‘should have been’s. In the constant instabilities, in all our serendipities and inconsistencies.

Beginnings are made when you step out, step through, when you forge your own way because it’s the only thing you can do. They exist everywhere – tucked between the yesses and the noes, awaiting your decision, your command – your army of opportunities.

Beginnings hide under the scratch-off seal of lottery cards, within the crackle of a voice down the phone, behind the eyes of a stranger on an autumn morning; they blow in on the wind and disappear on a whim – as numerous as they are, they don’t last forever.

Beginnings began with a tremendous bang, and spread their chances across the universe. They curled around the earth and shot off into the stars, where we are destined to go and find them in their multitudes.

Without beginnings we have no end; no structure or stability in a world of volatility. Without them, we are left to wander aimlessly, until life itself loses meaning. Sometimes, we are unaware that something has begun, only realising once our foot crosses the finish line that we were too caught up in everything else to appreciate it.

Beginnings are sensitive, tentative, a dance between a head and a heart, unsure of who is leading but needing to keep moving until the last note has passed.  Beginnings are a testament to how hard we can try, to what we can achieve in the fleeting moments before we die.

And when our beginnings come crumbling down, when the absolute fades into obscurity, it is then that we must pick ourselves up and find the strength to begin again.

The keys are turned, the engine starts. The clutch is pressed, the gear is picked. The handbrake is lowered, the wheel is spun. A new beginning is seized as the car pulls away. An old beginning ends as one person leaves, but another one stays.

Local Listens: The Nottingham Artists You Should Be Listening To

Plant Based Protein On A Budget