Review – Guardians of the Galaxy 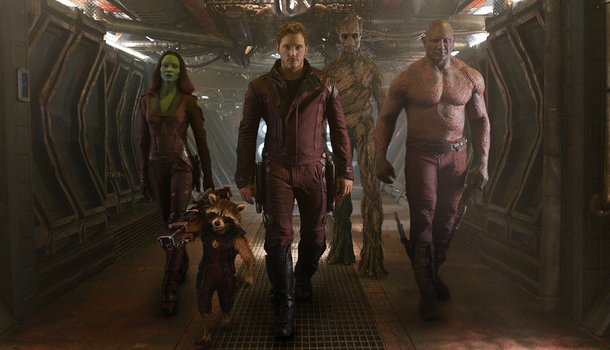 The tenth instalment in their Cinematic Universe, Guardians of the Galaxy is a momentous accomplishment for Marvel Studios’ perpetually expanding franchise. This is more so due to the film’s ambition to adapt a cosmic comic that is distant and unique from previous superhero films, rather than the film’s actual efficacy.

Guardians of the Galaxy takes place in the far reaches of space, as an interplanetary thief abducted from Earth at a young age named Peter Quill (Chris Pratt) steals the Orb, an artefact yearned after by the villainous rogue Ronan the Accuser, amongst other interested parties. This brings Quill, calling himself Starlord, into contact with outlaws Gamora, Rocket, Groot and Drax, forming an uneasy alliance of criminals into five Guardians protecting the threatened Galaxy from Ronan. 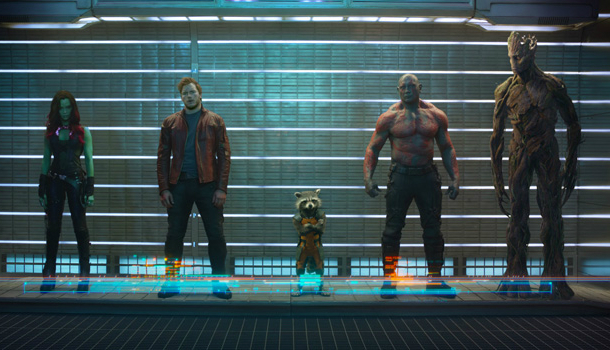 Directing a screenplay by Nicole Perlman and himself, James Gunn’s Guardians of the Galaxy is regrettably an outwardly gratuitous guise in the Marvel Cinematic Universe (MCU); the first one yet. Though the film’s quite literal expansion of the Universe very maturely doesn’t take itself too seriously, its inability to really fit together with preceding Marvel movies, tonal inconsistencies and sporadic satisfaction are too heavy a burden for the film’s bits of brilliance to bear.

Commendably, Guardians doesn’t rely on the Iron Man‘s, Thor‘s, Captain America‘s or Hulk features for its filmic success (though the folks in the marketing department may have). Instead, Gunn robustly sets the film and its heroes up as withstanding individuals capable of constructing a separate story about a group of heroes relatively unknown to non-comic book readers.

Nonetheless, the concern of establishing its five core misfits means as a group they feel far too distant from the MCU. Rather than Universe building, which we’ve evidently witnessed since the end of The Incredible Hulk, Marvel seem to have halted construction to create something new entirely.

While it is inevitable that Guardians will tie-in more clearly with the MCU at a later date with a sequel already announced for 2017, as it stands, its cross-comic references were too few. The Orb is a particularly ignored MacGuffin despite having a wider significance, and Benicio Del Toro is wildly underused as the enigmatic Collector.

Even though isolated in the MCU, this relatively minor gripe is a forgiving one in the interests of distinguishing the Guardians as individuals and introducing them to a wider audience. Less forgiving however, is the sci-fi adventure’s incontinent use of comedy. Other than some badass dance moves from Starlord (particularly in his opening scene), the literal literacy of Drax (Dave Bautista) and undeniable show-stealing from Rocket (Bradley Cooper) and Groot (Vin Diesel), the majority of the film’s humour is misplaced, predictable and unworthy of laughs.

Far too overloaded with jokes as a gesture for narrative progress, the comically challenged movie very oddly contrasts its prevalence of humour with an antagonist taking himself far too seriously. Ronan’s brutality and ruthlessness is shown following a funny moment elsewhere in the galaxy.

The assembly of scenes thus appears unmelodious because the tonal composition of comedy and drama fails to flow coherently, unlike the success in The Avengers. Ronan (Lee Pace) is not a character that complements the comedy of the Guardians and so feels as misplaced as the jokes often do. Pace’s portrayal does accomplish everything asked of him, which is unfortunately a simple villain doing villainy things which are villainous, and that’s about as complex as it gets. 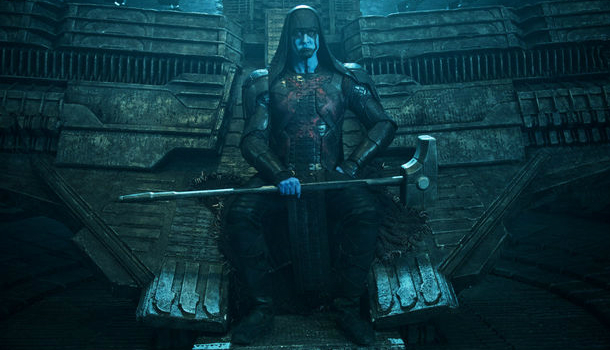 In addition to Ronan, the remaining characters beyond the five heroes are as disposable as the extra pamphlet in DVD cases. Sure, they occupy space, but they’re unmemorable, undeveloped and uninteresting. Consequently, the film’s overall lore is a bore, and considering the ambition of its cosmic setting, that’s quite a distinct flaw.

These characters including Nova Prime (Glenn Close), Nebula (Karen Gillan) and Yondu (Michael Rooker) if anything just confuse a simple premise by disturbing its linearity. Where we could have had the continuity of coherence, we are interrupted by boring plot points and parties poking and pondering at this one still unexplained Orb.

Au contraire from its imperfect elements, Guardians of the Galaxy negotiates its yawn inspiring qualities with some trademark Marvel flair, and a satisfying wind down ending. Tantamount with any other MCU film, the lead actors do a splendidly prideful and fun job in their respective roles too.

Bradley Cooper, Chris Pratt and Dave Bautista create superb individualistic traits for their characters, establishing them as individuals with sentimental stories to tell, in world that’s lived in. Meanwhile, most pleasing character Groot, a tree-like creature who has five total words to say, has an incredible heart and charisma that embodies how the five Guardians share a convincing chemistry as they shift from conflict to camaraderie, with Groot and Starlord helping bring them all together. 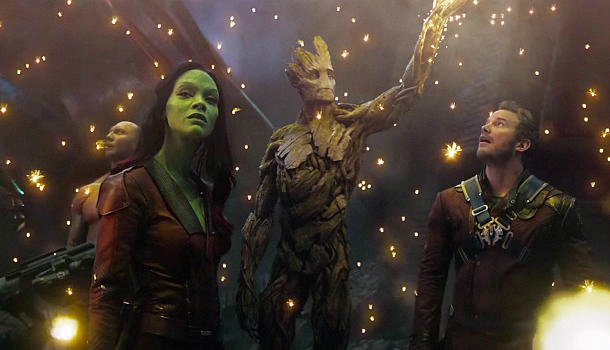 Guardians of the Galaxy also looks absolutely beautiful. From the CG effects of Rocket and Groot, make-up artistry for Gamora (Zoë Saldana), and a vibrant spectrum of cosmic colouring, the film is a spectacle to marvel at, apparent even away from the action.

Tyler Bates, whose score and soundtrack selection was completed in tandem with principal photography to allow James Gunn to shoot the film to the music, rather than the more traditional reversal in the process, makes the film very musically gifted. This certainly is shown (and heard) throughout, as Quill sentimentally carries a portable cassette player on his travels, playing songs from Blue Swede, Five Stairsteps and The Jackson 5.

Yet, in its entirety, Guardians of the Galaxy is too intermittently entertaining, an improbable disappointment from the usually guaranteed gratification of Marvel Studios, though will hopefully benefit from a re-explored viewing as the Cinematic Universe expands.