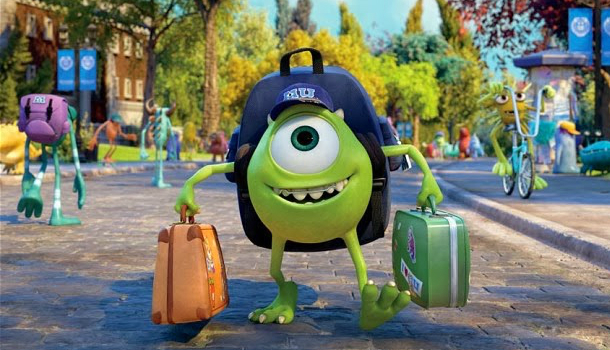 Welcoming all to the new year at Nottingham, we at Impact Film & TV are introducing the first instalment of our fresh new feature, where we propose a different scenario along with a related film or television suggestion to accompany that scenario. For our opening week, we are greeting all first year students with last year’s Pixar animation, Monsters University.

The prequel to 2001’s Monsters, Inc., Pixar invited us through a door into the past in order to show Mike Wazowski (voiced by Billy Crystal) and James P. “Sulley” Sullivan (John Goodman) meeting for the first time, as both enter MU (Monsters University) with the hopes of majoring in the Scare Program.

Sulley’s reliance on natural ability to scare results in a laid-back, egotistical and socially-driven approach to university life, a roaring contrast to the more studious and motivated Mike who becomes an outcast and lacks the organic flair to frighten. The two are reluctantly forced to work together in the university’s Scare Games competition after they are kicked off the Scare course, with success in the Games promising a return to the Program. 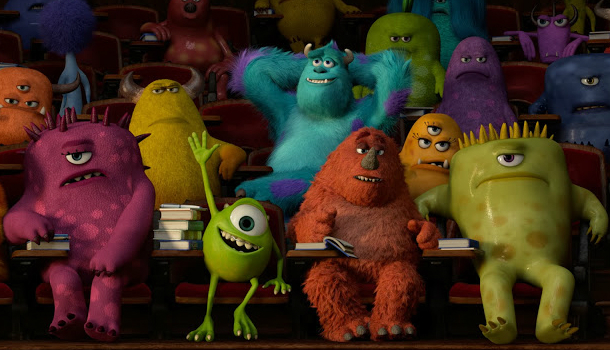 The irony of the initial dislike Mike and Sulley possess for one another is how their respective disparity in strengths and weaknesses complements their eventual friendship as a complete and fitting duo. This, along with the supporting student characters at MU mirror UoN’s own self-described status as ‘Britain’s Global University’, with a diverse campus environment made up of students with exceedingly dissimilar priorities and backgrounds, who can nonetheless be friends.

While prideful on competitive spirit, the MU Games are representative of how we needn’t take competition overly seriously too, due to the more important themes of comradery and unity, and of course opposing the real evil according to student rebellion: authority. Whether you’re entering university aged 18 or 80, the film may also serve as a reminder to retain any childhood innocence within. Monsters University should thus accommodate to all you first year students by giving a lighthearted and upbeat replica of the typical aspects of student life at Nottingham, with monsters.

Whether you’re a student who loves studying, working, sports, reading, partying, silliness, laziness, craziness, trying everything, doing nothing and/or more, they’ll be some mad monster in MU that tickles you until your laughter generates enough power to fill 50 of those energy tanks. The cast of characters you’ll encounter in Nottingham are not unlike those found in Monstropolis, in personality and looks. 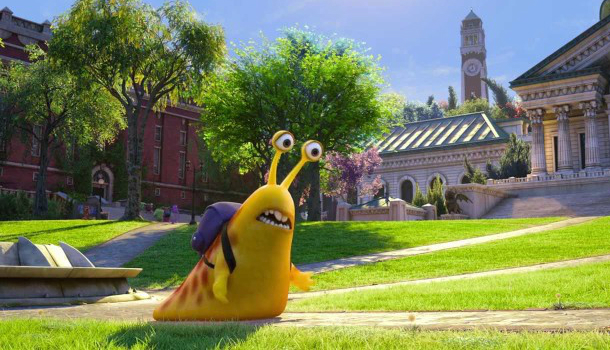 So, back to the film, Monsters University is probably Pixar’s most fun movie. Absent of the emotional resonance of the studio’s other pictures, notably Monsters, Inc., the film replaces such sentiment with a blast from Mike and Sulley’s past, one of pure elation during the Scare Games.

A nonstop barrage of hilarious enjoyment, a monstrously attractive animated environment, and a energetic atmosphere throughout, if anyone, anywhere has a university experience as fun as this film, I’ll be as green as Mike Wazowski’s hairless body with envy, though don’t let that prevent the film from inspiring you to try.

With enough universityisms to compete with the conversations in the Portland Building, the MU Campus (pictured above) also has a remarkable physical resemblance to our campuses. The building on the left mirrors the Main Building on the Sutton Bonnington Campus, and is that the clock tower of the Trent Building in the background? All right, maybe I’m going too far now.

Monsters University is currently streaming on NOW TV, is available by postal rental via LoveFilm through Amazon, can be rented on demand from cable and satellite providers, or can be purchased from most DVD and Blu-ray retailers.

What causes an Aurora?