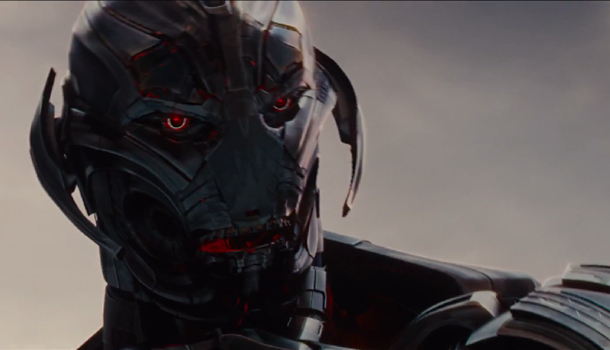 Finally, the Avengers: Age of Ultron trailer has been released, and this time humanity is under threat from the titular supervillainous antagonist, Tony Stark’s invention gone horribly wrong, who dreams of seeing “everyone screaming for mercy”.

Marvel fans have been waiting a long time for the Avengers: Age of Ultron trailer and it does not disappoint. The trailer is extremely intense and keeps you hooked from start to finish, partly due to the unsettling yet captivating voice of James Spader’s Ultron throughout.

The second Avengers film (again directed by Joss Whedon) sees the return of our favourite superheroes, yet they seem scared and often powerless against Ultron throughout this sequel’s trailer, setting a much darker tone to the second instalment. This dark tone is reinforced by the background music, a slowed down, super creepy rendition of Pinocchio’s “I’ve Got No Strings” to express the puppeteering metaphor throughout.

Although the darkness and intensity evoke thrills, let’s hope the film has not lost the humour and witty banter that makes Marvel movies so brilliant.

This two minute trailer introduces us to new characters such as the powerful twins Quicksilver and the Scarlet Witch. In addition to this, we see showdowns and conflicts between the avengers themselves. With all the fighting and new characters, it’s unclear in the trailer who is on whose side, which only adds to the excitement.

The trailer comes to a climax as we see Captain America’s broken shield lying on the floor whilst Ultron dominantly declares “There are no strings on me”.