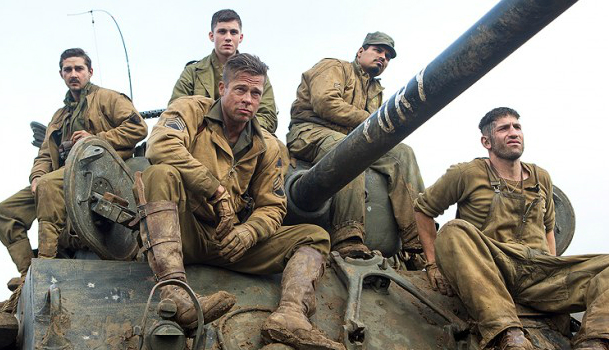 Exactly what it says on the tin; Fury delivers an honest but ugly snapshot of hostile Germany in 1945, as seen through the misfortunes of an American tank crew.

David Ayer’s two hours and fifteen minute war film contains the brutal dismemberment and emotional turmoil we have come to expect from any feature set in the front lines. While it does, at times, stumble upon the odd cliché or convenient occurrence, some unexpected standout performances make it more than worthwhile.

Fury follows a tank crew, calloused by experience, returning to base and undertaking new orders. Brad Pitt calls the shots as Don Collier, leading Shia LaBeouf, Michael Peña and Jon Bernthal through the mud and bombshells. Having lost a friend and fellow crew member, the men are less than welcoming to the typist thrown to them as his replacement.

Signed up only eight weeks earlier, Norman Ellison (Logan Lerman) was trained to type sixty words a minute, not man a M4 Sherman tank. The crew don’t simply roughhouse the rookie but confront him with a mindset made for survival; one carved through the hate and savage encounters of tank warfare. We watch Norman struggling with his new job and the moral conflicts forced upon him while they roll on to even more perilous assignments.

The biggest surprise of the film, it has to be said, is Shia LaBeouf.

Whether we are in the tank or panning across the relics of previous conflicts, the film is lit and shot in a bleak yet believable manner. This being said, you might find some of the bullet trails to be a little CGI heavy at points. I found myself wondering if Brad and the boys had been stealing firearms from Storm Troopers. Even if some gunshots reminded me of hallway shootouts on the Death Star, my reproach soon faded as I was still engaged by the action sequences. 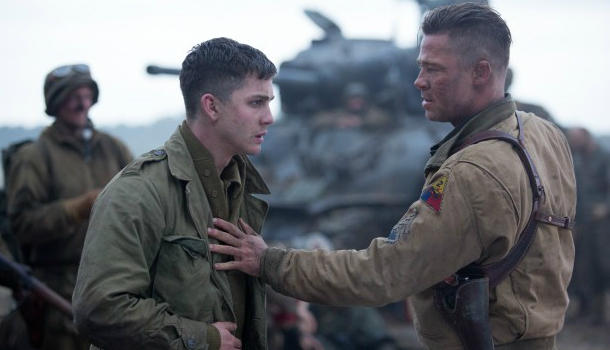 Scored neatly, the music lurks between the scenes and each chorus of explosions, feeling appropriate and not overzealous. Less audibly tidy are a few instances where clunky and seemingly unnecessary dialogue taints what could be pertinent interactions between the soldiers, yet these lines do not dominate the script.

Brad Pitt is as convincing as ever in his portrayal of Don Collier, the dependable leader in maintaining morale and making the tough decisions. In some particularly well-shot scenes, Pitt shares some raw moments alone with the audience – a task he is more than up to. At the ripe age of fifty, he remains a Hollywood staple, and for good reason.

Less than half his age, Logan Lerman goes toe-to-toe with Pitt, and is more than proficient in doing so too. The young actor’s part in the ensemble will likely be rewarded with more roles to come. Alongside the leader and his new recruit, both Michael Peña and Jon Bernthal are suitably cast in their supporting positions. 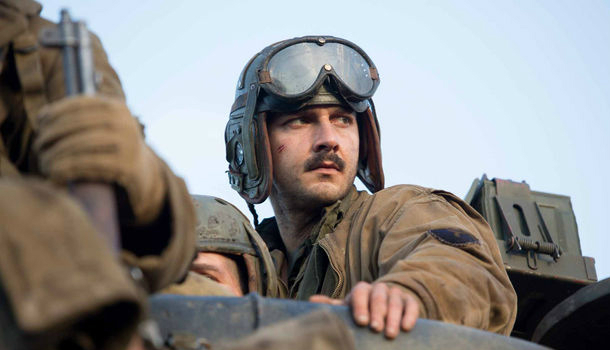 The biggest surprise of the film, it has to be said, is Shia LaBeouf. Coming off the back of some less successful projects and tabloid drama, he reminds us why he made it into films like Lawless (2012), where he worked alongside intense figures like Gary Oldman and Tom Hardy. He can act. With his moustache and glasses he might look a little like Groucho Marx, but he produces some of Fury‘s highlights.

Playing a God-fearing soldier balancing religion with the realities of war, his character may border a few clichés, but it allows LaBeouf ample opportunity for devastation, frailty and more. From someone who has not always been a fan, I will say he is certainly due some credit.

It might have a few failings but a ticket to Fury is money well spent. The war film genre has such monumental predecessors that avoiding their shadows without falling into clichés is often tricky. Regardless, Fury is a well-performed two and a quarter hours, with a plot and pace that complement one another. It may not shoulder its way into everyone’s top five war films, but the film is definitely worth watching.

Trailer Watch – The Theory of Everything

Writer and Editor for the Film & TV section of Impact, Bharat is a keen previewer, reviewer and sometimes just viewer, of all things cinematic and televisual, with a particular passion for biographical pictures, adaptations and sitcoms.
2 Comments on this post.