How to Make a Blockbuster Franchise Movie Trailer 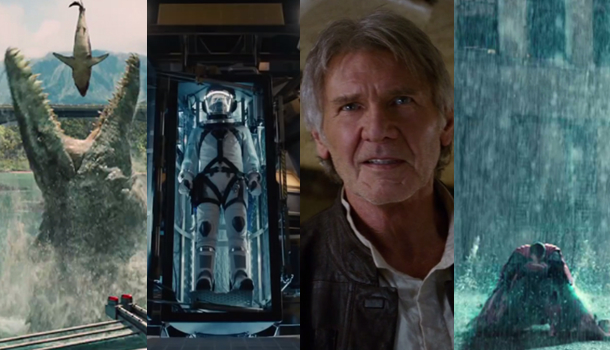 You could say the last couple of weeks or so have been great for new movie trailer releases. Finally, patience has been rewarded with another teaser for Star Wars Episode VII, full trailers for Jurassic World, Fantastic Four, and a leak of Batman v Superman: Dawn of Justice finding its way onto the internet. Using the formula of these promotional snippets, here’s a quick ten tip guide to making your own blockbuster franchise trailer, offering the pointers clearly essential to get everyone talking.

Dull dialogue, tedious pans and zooms, and footage mostly captured from your second unit production team of random locations ought to fill up plenty of time before your trailer gets to the stuff viewers are actually watching for.

When we say to do this constantly, we mean constantly. Seriously, you don’t want people forgetting what franchise they’re watching now do you? Plus, nostalgia is an excellent motivator, and will surely lead to enough ‘true fan’ arguments to fill an entire convention centre. Without these persistent reminders throughout your trailer, your film could be mistaken for one of those original screenplays; perish the thought.

Of course you don’t want to spoil your primary plot twist, so keeping your villains unknown is a must. To get around this in the trailer, only make light references to the antagonist, possibly exposing just a flash of whatever cape/trench coat they don, a hint of the weapon they wield, or possibly just a blade of grass they may have trod upon. Showing barely a glimpse of your movie’s adversary will send keyboard warriors into battle with theorising fandoms, causing an unavoidable raucous that’ll spread the promotion of your feature across the globe.

A good rule of thumb is that if test audiences don’t have ear damage by the end of it, then crank it up a few decibels. For maximum effect, interchange with deceptively quiet scenes so that the viewer has to lean in to listen to the dialogue, then hit them when they least expect it.

5. Use the Inception ‘BRAMMM’ Noise

While we’re still on the topic of music, no contemporary blockbuster trailer can be complete without this sinister centrepiece. A curious mix of an air raid siren pitched to match a foghorn, using this sound at least six times within a two-minute promo will ensure those watching fully comprehend just how desperately serious your film is willing to take itself.

Voice-over is a must. It should be delivered by an unseen character with a deep voice, and regard only vague, abstract concepts that try to be a metaphor for the whole film. Whether or not they actually achieve this is irrelevant, as long as it sounds cool.

Depending on what film atmosphere you are trying to create, you can either use dark lighting that makes it difficult to discern what is actually happening at all (see tips #3 and #6 for a solution), or you want everything to be so bright that you have end up with the exact same outcome. Either way, a bit of pathetic fallacy goes a long way in telling your audience that a new brooding or gleeful direction will probably spoil their beloved childhood franchise.

The cheesier and more clichéd the line, the better.

How can one trailer prior to theatrical release be enough? After showing essentially nothing in your teaser, have at least three main trailers, eighteen TV spots and other promos ready, guaranteeing the entire plot and look of your movie is revealed before anyone has actually seen it, because no one wants to actually enjoy the film by having limited expectations… right?

10. Finish With a Bang: Explosions

What’s better than normal fire? Uncontrollable fire. Add as much destruction as possible to appeal to the nine-year old in all of us. These are a key part of any trailer as they add to the drama, tension and the compulsary WOW factor, making the viewer ask the really important questions: Who’s going to pay for that? Are the cleaning crew qualified for this? Will this affect the bus timetable?

If your explosions are unnecessary, cataclysmic and inconsequential, even in context of the finished film, then along with our other nine tips, you may just have created the perfect modern blockbuster franchise movie trailer.

Disclaimer: results may vary, Impact takes no responsibility over possible injuries. Link us to your trailers based off of this guide via Facebook and Twitter, or leave a comment below.