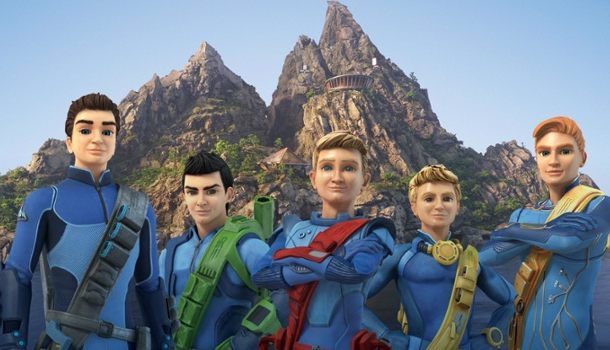 5! 4! 3! 2! 1! Thunderbirds Are GO! The boys from International Rescue are back, mixing CGI effects and live action sets to create a punchy revamp of the classic show. ITV’s Thunderbirds Are Go may not be perfect, but it is a lot of fun and should easily keep audiences gripped, adults and children alike.

The year is 2060, and International Rescue, with their incredible Thunderbird machines, are once again here to save the day. Unlike the 2004 movie (which, aside from Busted’s theme song, is best forgotten), Thunderbirds Are Go manages to tread the fine line between staying faithful to the original show and updating it for a modern audience. The Tracys may now be computer generated, but they are still recognisable as the same team, with the same spark and fantastic machines as ever. Tin-Tin may have gone, but in her place stands a contemporary heroine, Kayo, head of the Island’s security and pilot of Thunderbird S, the series’ new vehicle.

The original 1960’s show was a large part of many’s childhood, and this new updated look, for the most part, is very much faithful to the feel of the classic, with David Graham from the original series returning to voice Lady Penelope’s (Rosamund Pike) chauffeur, Parker. By combining the CGI characters with live action backgrounds, the sets occasionally don a similarly retro ‘home-made’ look to them, which is a lovely touch for die-hard fans. In fact, with the countless homages to the original show, it is clear that the team involved in the series’ production have a passion for the original, evident in their careful attention to bringing it to contemporary TV viewers whilst not eliminating the essence of the Thunderbirds franchise.

Right from the start, Thunderbirds Are Go provides more than enough action and thrills to keep younger audiences entertained, whilst keeping adult audiences hooked with part nostalgia, part intrigue. With the world under threat from a series of undersea earthquakes and with Thunderbird 1 out of action, it’s down to Thunderbirds 2 and 4 to investigate the earthquakes’ mysterious source and save a team of scientists trapped under the sea.

With a fast-moving plot packed with explosions and rockets, Thunderbirds Are Go demonstrates exactly how a show made for kids can keep adults just as entertained. The series arc is also made clear right from the off, with the threat of The Hood re-emerging and the hunt for missing father, Jeff Tracy, sure to return in future episodes.

Rather annoyingly, despite airing the first episode at 5pm, ITV, in its infinite wisdom, has decided to move the show to an 8am slot. Though fine for early birds, it looks like ITV Player is going to be key in keeping up with the continuing adventures of International Rescue. Watch for the nostalgia trip, stay for the action-packed missions of TV’s best-known rescue team.

Writer and Editor for the Film & TV section of Impact, Bharat is a keen previewer, reviewer and sometimes just viewer, of all things cinematic and televisual, with a particular passion for biographical pictures, adaptations and sitcoms.
3 Comments on this post.