It has been fourteen long years since fan boys were taken into the jungles of either Isla Nublar or Isla Sorna, the two fictional dinosaur-infested islands in the Jurassic Park universe. The latest entry in the Jurassic Park franchise aims to reboot the franchise, whilst maintaining ties to the original trilogy. It is here that Jurassic World really shines.

Years have passed since the Jurassic Park was abandoned. Luckily for moviegoers, a new billionaire has continued John Hammond’s work and opened the new ‘Jurassic World’. The film begins several years after the new park’s opening, in a world where it takes more than just a T-Rex to attract the crowds. In order to bring back the crowds, the scientists at Jurassic World begin creating a hybrid dinosaur. It’s this that makes things go pear shaped.

Jurassic World’s greatest achievement is how it doesn’t take itself too seriously, a problem that plagued 2001’s Jurassic Park 3 and most current franchise reboots. Instead, Jurassic World jokes about its own premise, accepting that dinosaurs just aren’t “wow-enough” to please the cinema crowd anymore. The film adds many throw backs to the old Jurassic Park films, in particular the original, and accepts the fact that the old park was a complete nightmare of a project. There is also plenty in this for fans of the original to smile at. As soon as I heard John Williams’ classic Jurassic Park theme, I couldn’t prevent the child-like grin erupting across my face. I felt like I was five again, watching the original on video tape. Jurassic World shows everyone what the park would have looked like had it opened to the public and it is a true spectacle, far beyond anything I could have imagined. It baffled me how detailed and believable this world was and this made it far easier to really get into the universe in which Jurassic World lies. 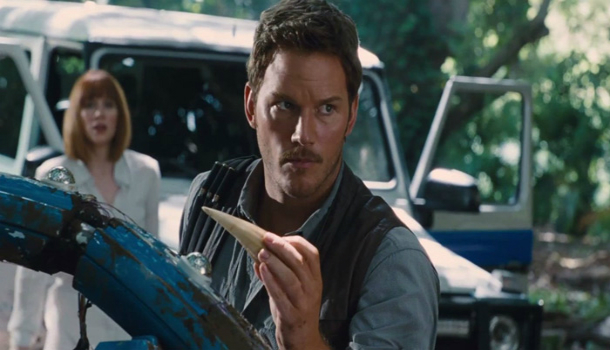 Jurassic World brings the franchise back to its horror roots giving some real jump moments and some scenes which you’ll find surprisingly disturbing. The days of Jurassic Park being aimed at children are very much over, this one is for fans of the original. The new dinosaur is terrifying, making the T-Rex from the first three films look like a common lizard. Once you hear its presence, you know its about to wreak havoc. I found most of the scenes involving the Indominus Rex edge of the seat moments, had they been any longer I wouldn’t have been surprised to see half of the cinema screen leave for a toilet break.

The hybrid dinosaur is not the highlight dino in the movie however, as many will find the Velociraptors will take this spot. The trailers worried me, the thought of raptors being trained like guard dogs seemed stupid. However, I was pleasantly surprised to see it work so well here. The film neither takes the taming of these dangerous animals too seriously to force the viewer to accept it, nor did it seem like too much of a joke. Those worried that they won’t get their fill of raptor carnage need not fear, they get plenty of screen time and, tamed or not, they are as merciless and threatening as ever. 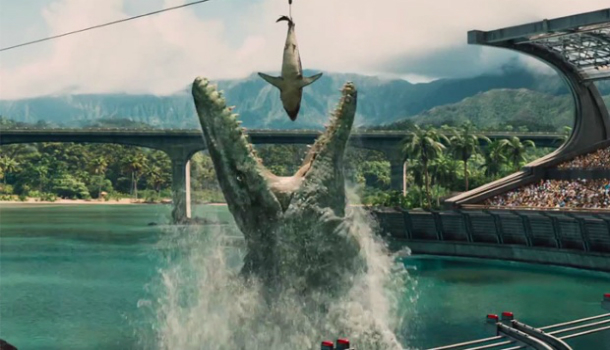 As much as I loved seeing these huge creatures destroying everything on screen it would be fair to say that what makes Jurassic World truly memorable is its human characters. Chris Pratt has become Hollywood’s new go-to-guy. His latest turn as Star Lord in Guardians of the Galaxy showed how he can successfully pull off being in a film that makes jokes at itself, this made him the perfect choice for Jurassic World. Chris Pratt’s roots in comedy come through in his performance, even when playing an ex-marine hard man. The humour is very Marvel-esque in its use, every now and then the tension is broken by a perfectly delivered joke.

Bryce Dallas Howard’s portrayal of Claire Dearing evolves more than Chris Pratt throughout the film, making her a deeper more interesting character to examine. Her two young nephews are on the island; the story centres on her relationship with them and, with the help of Chris Pratt, trying to save them from the big bad dinosaur. However, no character seems wasted or is given a back seat in order to add more dino-destruction.  Jurassic World does not abuse the fact that it has dinosaurs, and the film is a very human-centric one, primarily about their relationships with each other, it just so happens that it coincides with a killer dinosaur on the loose.

The days of Jurassic Park being aimed at children are very much over, this one is for fans of the original

Finally, I have to mention the ridiculous/incredible conclusion. I won’t spoil anything but it was a reminder that we were watching a fun film that was not planning on being taken too seriously. I couldn’t believe what I was seeing and I can’t see myself being so joyously confused and amazed simultaneously whilst watching a film again anytime soon.

Jurassic World juggles both its old and new fan bases well, and for this it deserves respect. Add this to the fact that, in my opinion, it is possibly the most enjoyable family film of the year and it deserves far more. It doesn’t fall into the trap which most feared by overusing dinosaurs and forgetting about the humanity of the original Jurassic Park that kicked it all off. The film is masterfully put together and worth a watch for everyone, whether you loved the 1993 original or not.