Very rare is it that two Nottingham venues will put on the same show in the same week. However, Northern Ballet’s version of George Orwell’s 1984 at The Theatre Royal is as disturbing as it is beautiful – a word never normally associated with this production.

1984 follows Winston, who after buying a diary to document his thoughts, a punishable offence in society controlled by the ominous Big Brother, falls in love with a co-worker and begins an affair – an illegal act. In recent years, it seems many production companies have attempted their own versions of 1984, but Northern Ballet’s version takes you on a different journey focusing on Winston and Julia’s power as a couple being pressured by the force of the Party.

Initially sceptical as to how the story could be set up without words, the way they combined dance and technology to set up the plot element of society being watched constantly was clever and impressive; technology is a large element of this production, but it does not take away from the ballet which remains the focal point throughout. 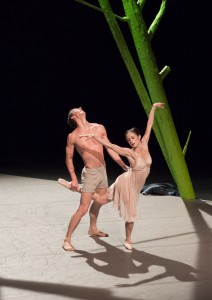 Tobias Batley as Winston danced beautifully, fully embodying the character’s inner conflict and emotional developments through his precise dancing and his convincing expressions. Martha Leebolt as Julia was very modelesque and her dancing was enthralling, however, in the first act she lacked the connection with her character that Batley possessed with his. That was until the end of Act 1, when Winston and Julia began their affair. The couples’ pas de deux was so beautiful it gave me goose bumps and was the most memorable aspect of the production for me. The chemistry and commitment of the two dancers was so intimate and believable that it felt intrusive to be watching, but it was physically impossible to look away. After this point, Julia was seen in a different light and, unlike other more traditional depictions of the character, Leebolt presents her Julia as a more loving character as opposed to a sexual one, which makes Winston’s act of blaming her seem even harsher.

As an ensemble, the company are flawless. Each dancer bought their own individual flair to the production, a true testament to the presentation of Jonathon Watkins’ brilliant choreography and direction. The dancing was so entrancing that the changing set was unnoticeable. The contrast between the ensemble as the party with their rigid and brisk movements and the fluidity of the proles is heightened by the distinct change in music, composed by Alex Baranowski. Doing the score justice was the amazing orchestra who all played to perfection under the control of musical director, John Pryce Jones. Aside from Tobias Batley, the stand-out performer for me was Victoria Sibson; fully committed to the ensemble, her portrayal of different characters were so distinct that she was extremely watchable. 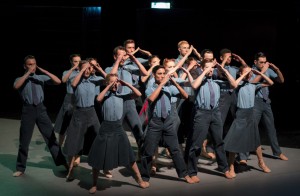 The only criticism I have for this piece is the presentation of the story. The purpose of the haters wasn’t very clear – were they supposed to be the party hating something, or were they a completely different group of people protesting against the party? Had the summary not been provided in the programme, it would have been rather difficult to follow what was happening. Additionally, because of this the production appeared to be a love story more than anything else.

On a final note, it is amazing to see established companies taking a chance on new material to encourage new audiences to understand the true power of balletic performances. Whilst it is always nice to see the well-known classics being performed, new adaptations are exciting and something that Impact Arts fully supports. Jonathon Watkins deserves commendation for this masterpiece and it is definitely a must-see for anyone in the East Midlands area!

Five arrested after stabbing in Lenton