Five arrested after stabbing in Lenton 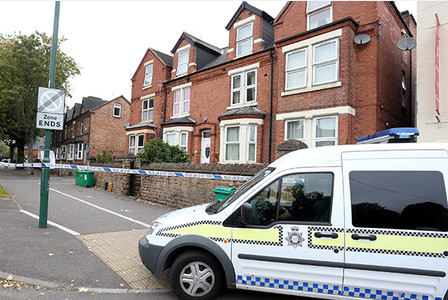 A man has been taken to hospital after being stabbed at an address in Lenton last night.

Three men and two women believed to be between the ages of 26 and 51 have been arrested following the incident on Sherwin Road.

Police were called to the address in Lenton at 11:20pm last night and a cordon remains in place while forensic officers investigate the scene.

The 50-year-old male victim was taken to Queen’s Medical Centre with injuries to his arm, which are not believed to be life-threatening.

“I’m shocked that someone has been stabbed in Lenton”

Two Nottinghamshire Police Scientific Support vans could be seen this morning outside the house. Police confirmed that they had been present at the scene since 11:20pm Wednesday night when they received the call to the property.

“Five people were arrested at the scene in connection with the incident – three men and two women. A sixth person was subsequently taken to QMC having suffered an injury to his upper arm, believed to have been caused by a knife.

“He is still in hospital but his injuries are not believed to be life-threatening or life-altering. Those arrested are currently in police custody.”

Tegan Williams, a third year English student, told Impact: “I saw the police cordon on my way onto campus this morning. I was surprised because it looked quite serious. I’m shocked that someone has been stabbed in Lenton and I hope that the victim is not too badly hurt.”

Another student told The Nottingham Post: “We have some friends who live closer to the house who said they heard lots of screaming, and that’s all we know.”