It’s here. After all the hype, the teasers, the trailers, the TV spots, the tight-lipped interviews, the ingenious marketing and the meticulously planned promotion – it’s here. The most hotly anticipated film of the last decade has arrived. And it doesn’t disappoint.

Star Wars: The Force Awakens is a quintessential Star Wars film that stands its ground alongside the films of the original trilogy. Director JJ Abrams’ new installment is a fun, action-packed adventure and, judging by the audible reactions in the theatre, he has given fans exactly what they had been hoping for.

The film picks up around 30 years after the events of Return of the Jedi (1983), with the new ‘First Order’ – headed by General Hux (Domhnall Gleeson), Kylo Ren (Adam Driver) and Supreme Leader Snoke (Andy Serkis) – taking the place of the original trilogy’s Galactic Empire. General Leia Organa’s (Carrie Fisher) ‘Resistance’ are the ones fighting back. 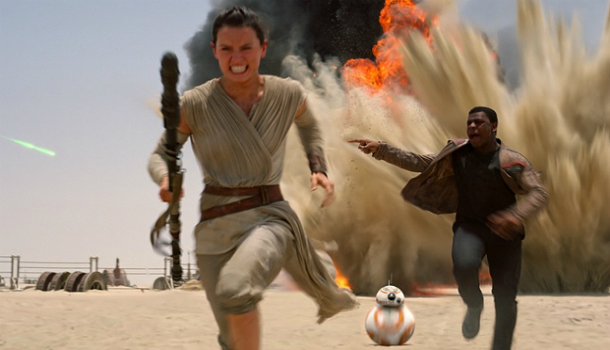 The plot is simple and sweet, but familiar. Treading carefully to avoid spoiler territory here, the film involves an important item hidden inside a droid and a race to blow up a space station (ring any bells?). However, after suffering the ‘trade disputes’ and convoluted plots of the prequel trilogy, this is, in fact, refreshing. It is the familiarity of The Force Awakens that makes it such an enjoyable experience. The viewer feels ‘at home’ as they are launched straight back into a galaxy far far away. To quote Mark Hamill in The Force Awakens Comic-Con 2015 Reel, “Everything’s changed, but nothing’s changed”. In addition to the obvious (trailers had revealed a soaring Millennium Falcon as well as Ford, Fisher and Hamill reprising their original roles) the small touches are there too. Brief appearances of the Falcon’s Sabacc table, the ‘seeker droid’ training tool Luke used in A New Hope, and the much-publicised increased use of practical effects and real-life sets, signal a return to a gritty ‘lived-in’ Star Wars universe that we haven’t seen since 1983. There’s also not a midi-chlorian in sight, which Star Wars purists will be most pleased about.

Of course, there is much that’s new in Episode VII. There are new planets, new CGI aliens (watch out for the Rathtars!) and, most notably, a new young and charismatic cast. Oscar Isaac plays resistance fighter Poe Dameron – a cross between Han Solo and Wedge Antilles – with all the wit and piloting skills to prove it. Daisy Ridley stands out in the powerful female lead Rey – a desert planet scavenger destined for much more. Finn, a stormtrooper with a conscience (played by John Boyega) marks a first for the Star Wars saga: here is the first time we see a stormtrooper portrayed as a human being, rather than a masked emotionless henchman. Moments where Finn is smeared with the blood of a fellow trooper, or where Rey stands shaken having shot (and presumably killed) her first ever stormtrooper, are therefore surprisingly dark, but add a new and interesting dimension to the Star Wars we know. The film’s main villain is also unlike any we have seen before in Star Wars. Powerful and angry, but raw, volatile and unpredictable – Kylo Ren also makes for frightening viewing. 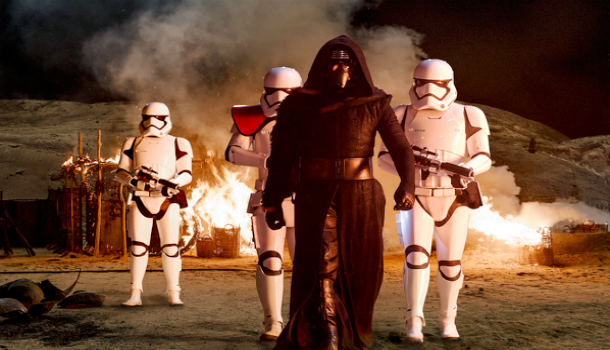 The Force Awakens nevertheless retains all of the ‘fun’ of its predecessors. New astromech droid BB-8 (certain to become a fan favourite) brings an adorable playfulness to the lineup, and the camaraderie of the original trio is mirrored in Rey, Finn and Poe. Frantic mid-action-sequence cockpit conversations return, and jokes, quips and amusing moments (many of which are ‘nods’ to the original trilogy) originate from the entire main and supporting cast. The brilliantly smart reveal of the Millennium Falcon, in particular, is worth a special mention. It’s not just Poe or Han cracking the jokes in what is perhaps the funniest Star Wars film to date.

It is the care taken by Abrams and co-writers Lawrence Kasdan and Michael Arndt, to develop these new characters that makes The Force Awakens so successful. The final lightsaber battle makes for edge-of-your-seat viewing, not just because of choreography or visual effects (which throughout the film, as a matter of fact, are stunning), but because emotions are running high and the audience have formed a significant attachment to the new characters. The new lineup, each with their own unique carefully-constructed personalities, slots seamlessly into the Star Wars universe alongside our old favourites. Recognisable musical themes from the original trilogy, in a typically rousing John Williams score, link the old with the new and the transition from the older generation to the new cast is therefore both exciting and thoroughly satisfying to watch.

There’s not been a film that has made me grin this much in a long time. The Force Awakens will make you laugh, cheer and gasp. My advice? Just go and see it. You will not be disappointed.

The Verdict:
In JJ we trusted. And he delivered.