It’s no mean feat squeezing Tolstoy’s epic War and Peace into 6 episodes. However, the BBC series, which came to its gripping climax on Sunday evening, managed the task effortlessly.  Starring Lily James as Natasha Rostova, James Norton as Andrei Bolkonsky and Paul Dano as Pierre Bezukhov, War and Peace focuses on the stories of five Russian aristocratic families, the Napoleonic invasion of Russia, and the impact this had on all the characters. With plenty of blood, gore, war and enticing eye candy in the shape of James Norton and Tuppence Middleton, the BBC’s adaptation brought the extravagance of 19th century Russian society to life in all its glory.

The series opens in 1805 and focuses most prominently on the life of young Natasha, who is yearning for love, and the rise of Pierre, who becomes Count Bezukhov after his father dies. Pierre is forced to marry the beautiful Helene (Tuppence Middleton) who is engaging in some questionable activity with her brother Anatole. Andrei Bolkonsky (James Norton) then appears with his smoldering gaze, to sweep Natasha off her feet (but not before his wife dies in a rather bloody birth scene) and the first romance is born. It seems that the plot line moves a bit too slowly for the first few episodes before then speeding up too quickly. Nonetheless, with all the characters, it’s nice to be able to get into the story slowly, and invest enough in the love story of Natasha and Andrei. Besides their romance, there is Natasha’s brother Nikolai (Jack Lowden), who nearly ruins the family with his gambling, and strings along their cousin Sonya for years, before deserting her for Andrei’s sister Marya (Jessie Buckley). Nikolai is rather infuriating, but Marya is such a lovely character that it ends up as quite a satisfying love story. 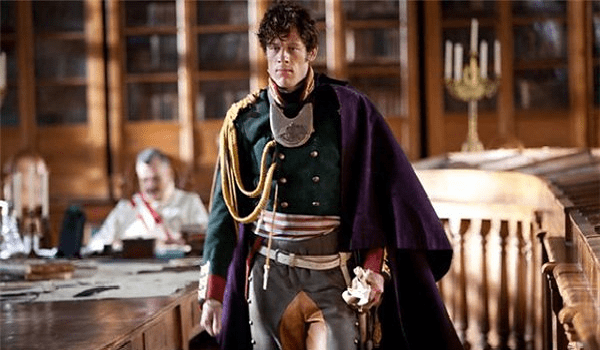 However, to quote Shakespeare, ‘the course of true love never did run smooth’. Natasha and Andrei get engaged, but his father encourages him to go away for a year before their marriage so that Natasha can prove her love for him. Rather irritatingly, she makes it all the way to about 11 months, and then falls for Anatole (Callum Turner) – the smarmy brother of Helene (keeping up?), who proceeds to ruin her by attempting elopement despite the existence of a first wife. Natasha is devastated, attempts suicide and becomes very ill, while Andrei breaks off the engagement. However, it’s at this point that we can start to ship the relationship between Pierre and Natasha, who dedicates months to spend time with her and nurse her back to physical, and mental health. It’s sweet to watch as he becomes adorably bashful in her presence and nearly confesses his love for her, before running out at the last minute. Meanwhile, his wife has been getting up to all sorts of naughty business on tables.

In and amongst all this angst is the growing tension between France and Russia, and the fighting starts to come to head in the latter part of the series. Anatole and Andrei are both injured in the fighting, and Andrei, who is reunited with Natasha, forgives her just before dying in her arms (cue hysterical tears). Something that worked for this series was that it dedicated time to both of Natasha’s romances, something the original Audrey Hepburn film did not managed to do, so it was easy to feel (a lot of) sadness at Andrei’s passing. Meanwhile, Pierre returns to Moscow from the fighting muttering threats to kill Napoleon and ends up as a prisoner of war under the French and is forced to join their retreat from Russia in the harsh winter. Pierre undergoes extreme hardships, and loses the only real friend he has to illness. His wife Helene is in the ‘family way’ and, rejected from high society, dies by an overdose whilst trying to abort her baby. Pierre, who is eventually freed, is free to return to Moscow, where he confesses his love for Natasha, who in turn, confesses hers. Meanwhile Nikolai, who has well and truly ruined the family with his inability to marry upwards and his penchant for gambling, breaks things off with Sonya, and marries Marya, managing to save the families fortune. All the while, Natasha’s darling-of-a-father (Ade Edmonson) sadly dies.

“It’s fair to say that the series has garnered attention in the press for being more ‘Phwoar and Peace’ than ‘War and Peace’.”

Despite all the misery and hardships, the series has a beautiful and uplifting ending, with both couples, (Pierre and Natasha, and Nikolai and Marya) surrounded by their children, looking happy and peaceful. Although, rather awkwardly, Sonya, who was rejected by Nikolai, features in this picturesque family scene! The final episode is 90 minutes of pure drama, with war, blood, fighting, love and about four deaths, but it is very much worth it.

It’s fair to say that the series has garnered attention in the press for being more ‘Phwoar and Peace’ than ‘War and Peace’. This is due to the showcasing of incest, naked women, and a cheeky flash of penis, the necessity of which some more frigid of viewers have questioned. Nonetheless, in today’s sex mad society, the additions of these raunchy scenes certainly helped provoke interest and set pulses racing on those miserable Sunday evenings. Who knew Tolstoy could be so exciting?

Verdict:
If you can’t be bothered to read the book (and let’s face it, who can?) then this series is definitely worth a watch. It’s only 6 episodes, and with plenty of familiar faces and fantastic plot line, its easy to get into.