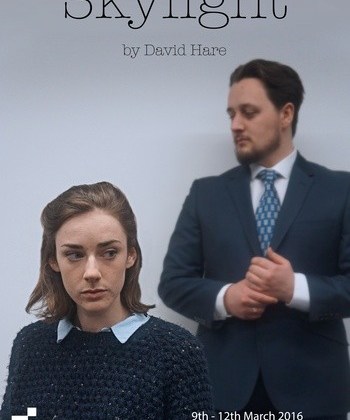 Human relationships are never simple. University students are particularly familiar with the challenges and changes one endures when leaving home to live independently in a new environment with an entirely different set of people. Skylight, amongst other things, is a theatrical commentary on the complexity and depth of relationships between humans.

Written by David Hare and debuting in 1995, it focuses mainly on the relationship between schoolteacher, Kyra Hollis and restaurateur, Tom Sergeant. At the opening of the play, we are introduced to Kyra and Tom’s son, Edward. Within their brief period of interaction, there is awkwardness, rage, confusion, tenderness and regret. Skylight is a masterfully constructed piece of drama based on human emotions. Profitt’s interpretation of this work remains faithful to preserving the using of emotions as the vehicle on which the play is driven forward.

With a talented cast consisting of Libby Boyd as Kyra Hollis, Gus Herbert as Tom Sergeant and Andrew Houghton as Edward Sergeant, the interlaced lives of the characters are revealed. The play chronicles one cold winter’s night and Kyra’s reconnecting with both Sergeants senior and junior. Kyra had once worked for Tom, becoming his lover for six years, until his wife discovered their affair. Prior to this, Kyra had supposedly come to be very much a part of the Sergeant household.

The events of the play take place three years after the ending of the affair. Tom and Kyra spend this biting winter’s night attempting to determine if the once passionate flame that they shared has the possibility of being rekindled. Over the span of their interactions, not only is their own relationship revealed, but because of the interlaced nature of relationships, Skylight has the capability of provoking the audience into thinking of far more general human relationships such as those affected by gender, age and class differences.

The set for Skylight allowed not only a heightened realism to be established, but also was essential for creating a physical contrast within the play. Upon entering the theatre, the set immediately catches one’s eye. The detail and meticulous nature in which the props have been placed was a factor in favour of the production, and Joe Strickland, as set designer, did an exceptional job.

Finally, perhaps the biggest indication as to whether any production of Skylight is successful is through watching Kyra successfully cook spaghetti from scratch on stage. Seemingly simple, this scene engages the senses of sight, hearing and smell, which done properly must allow for the appropriate weightage of attention to given to each by the audience members, while maintaining a balance between the realistic and stylistic qualities of the play. This scene was carefully delivered and even succeeded in conveying the humoristic qualities within Hare’s script, testifying to the success of Proffit and his team in producing the play.

‘Skylight’ is running at the Nottingham New Theatre from Wednesday 9th March until Saturday 12th March. For more information and to book tickets, see the New Theatre website here

Impact on the Campaign Trail: Day 7