Research at Your University: Revolutionising MRI

To help doctors visualise internal body structures using MRI, contrast agents are delivered into the body in the following ways: via injection (to look at the cardiovascular system), ingestion (gastrointestinal system) or inhalation (lungs and pulmonary systems). These agents show up clearly in MR images.

Helium-3 (3He) is a common gaseous contrast agent that patients inhale. 3He is an isotope of the noble gas helium. This isotope has one neutron compared to the popular helium-4, which has two, and is found in party balloons. This means 3He has a property called spin, which is what allows the gas to be seen using MRI.

3He is not naturally occurring in the environment, which means it must be synthetically produced. The only method for this is a nuclear decay process used by the nuclear weapons industry. This involves radioactive tritium (hydrogen-3) decaying into non-radioactive 3He. Clearly, this is not a stable source, nor, for some, is it the most ethical. In addition to medical uses, 3He has other uses in cryogenics and physics research meaning the demand for the isotope far outstrips supply and the price is constantly rising, from $100 per litre to $2,000 per litre in some cases.

Thomas Meersmann is part of a team of researchers at the university developing novel techniques to use other hyperpolarized noble gasses in place of helium. As each atom’s nucleus, its centre, can adopt one of multiple types of spin, the resolution of the images is low. Hyperpolarization forces many nuclei to adopt the same spin to improve the resolution of magnetic resonance images. 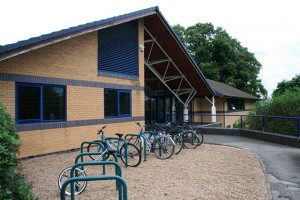 The Sir Peter Mansfield Centre for MRI studies is located right next to Cripps Health Centre on campus.

The most researched isotope is hyperpolarized Xenon-129 (129Xe) which shows a lot of promise. 129Xe is found naturally in the atmosphere so is a renewable source, unlike 3He. Due to its interesting diffusion characteristics 129Xe has been shown to be especially useful in diagnosing chronic obstructive pulmonary disease. By taking many MR images over a few seconds, the diffusion of the gas through the walls of alveoli (small sacs in the lungs allowing oxygen in and CO2 out of the blood) and other lung structures can be observed and monitored. In fact, the research suggests 129Xe is better at this than 3He.

Another noble gas being studied is krypton-83 (83Kr). The University of Nottingham is the only university worldwide studying this gas as a contrast agent for MRI. 83Kr is also naturally occurring so it, too, is a renewable source. Research on 83Kr has shown it is particularly useful for examining the surfaces of lung structures. This means it could be used to diagnose emphysema and to examine changes in lung surface structure over time.

The research has shown that 129Xe and 83Kr can both be used to provide complementary information when diagnosing pulmonary diseases and that, together, they can replace and improve upon 3He.

Impact spoke to Thomas Meersmann to get further insight into this burgeoning field of research.

Impact: The University of Nottingham is a leader in the research into hyperpolarised xenon and krypton MRI. What makes the university such a strong force in this area?

Thomas Meersmann: Nottingham is particularly strong in this field as the scope ranges from basic physics research to implementation in clinical facilities, all within walking distance on one campus. My own group’s work has pioneered hyperpolarized krypton and Nottingham is currently the only place worldwide where this new contrast agent is being explored.

Impact: What do you think the biggest challenge is with hyperpolarized (hp) Xe and Kr MRI that still needs to be solved?

TM: Xe has already made it through many of the approval steps, the challenge is to make [it] commercially more available. Kr still needs to go through these steps but since it is a non-reactive and non-poisonous noble gas, this should happen relatively fast within the next few years.

Impact: Your publications (see references below) mention hp Xe is good for diagnostic testing of lung health. Can He MRI provide this sort of information, and if so how does hp Xe improve on this? 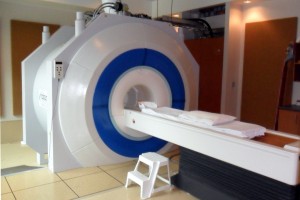 MRI machines are commonly used to image the anatomy of the body to diagnose cancer and diseases of the heart.

TM: The problem with the helium-3 isotope is that its supply is extremely limited. This is not so much a problem for basic research but this is a big obstacle for any envisioned widespread usage in hospitals. Xe like Kr is a renewable resource obtained from the atmosphere (we inhale a small portion of these gases with every breath we take) and has become a good substitute for He as an inhalable contrast agent for pulmonary MRI. Unlike He, Xe can provide additional MRI contrast when it is dissolved in tissue or blood and has been used for brain MRI. Kr can provide contrast that is indicative of changes in the lung surface.

Impact: How long until hp Xe and Kr MRI will be found in regular use in hospitals? What are the main things that need to be done to get it there?

TM: In the case of Kr, passing through the regulatory approval processes which will take a few years and, of course, commercial availability is key. Xe appears to be well on its way now and I would expect to find this contrast agent to become available in the near future at least in specialised pulmonary centres.

“Xenon and Krypton are renewable resources that are naturally present in the air, so have no underlying supply problems”

Impact: Aside from medical MRI, hp Xe has potential in several other areas. Can you explain more about these?

TM: It has been used in materials science for many years now and provides an excellent probe for void spaces in nanomaterials. Generally, there is a lot of potential for synergy between biomedical and materials science applications. What one learns in one field may improve the application in another. Personally, I find this an extremely exciting aspect of our research.

Impact: Production of 3He requires nuclear warheads. How do we currently use these warheads to get the helium?

TM: There is very little of this isotope naturally found on Earth. The stable, non-radioactive 3He isotope is typically obtained as a slowly accumulating decay product from the hydrogen isotope 3H. The major usage of tritium is by the nuclear weapons industry. The problem is that this supply (hopefully) won’t increase while the demand for 3He usage has massively increased over the years ranging from low temperature physics to radiation detectors for homeland security devices to medical MRI.

Again, 3He is completely harmless – it is just difficult to get. Xe and Kr are renewable resources that are present naturally in our air, and hence have no fundamental supply problem.

Alex Kirtly: “We’re going in with confidence but we won’t be complacent”