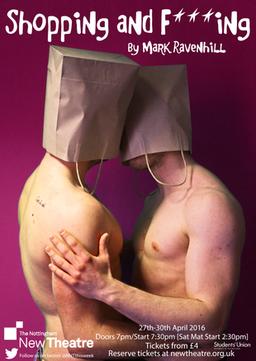 Shopping and F***ing is a 1996 play by English playwright, Mark Ravenhill. In a world where everything has been reduced to mere transactions, ‘money is civilisation and civilisation is money’. Under these circumstances, even the product of purchase is rendered secondary to the moment of exchange, ‘the trade’. From this premise, Ravenhill explores consumerism, presenting a violent, cruel world, where happiness is induced (and is only temporary) by substance abuse.

For his version of the play, director Liam McClelland has brilliantly chosen to lay out the stage so that the audience faces each other while the stage divides the two halves. By doing so an additional dimension is added to the play, as one could observe both the actions of the characters onstage and the reactions of the audience. Emotionally, this adds an extra layer to the experience of the play, as certain scenes were met with shock, disgust and even fear, expressed by members sitting on the opposite side.

“If Nottingham New Theatre’s version of the play had to be summarised in a word, it would be visual”

Shopping and F***ing has come to be one of the most famous plays to emerge from the style of in-yer-face theatre and it will not be hard to see why the name of this genre of theatre is so apt. The play lays everything bare (there is partial nudity) for the audience onstage. If Nottingham New Theatre’s version of the play had to be summarised in a word, it would be visual. Even before the play begins, one is meant to scrutinise the set designed intricately by Darcey Graham, which is littered in a deliberate mess with (amongst other things) Domino’s boxes, bottles, a dildo and two toy Simbas. Then the action begins and like potential customers, we are invited to look.

For a play to succeed visually, costumes and lighting are essential. Ronan Lee and Peri Ozkarpinar as production assistants and Harry Bridge as lighting designer, did a fantastic job. Through costume, each character presented a very clear identity to the audience and by borrowing elements from certain societal stereotypes, the audience was well-guided in making further associations beyond those onstage. Calculated lighting allowed for the literal spotlighting of certain characters and mirrored an adept salesman constructing the best idea of his product for potential buyers. Lights direct our eyes where to look, such that we should see what we are meant to, rather than what we choose to.

Ultimately, it was on the onus of the five actors onstage, Charlie Jamieson, Duncan McGillivray, Lara Cowler, Cameron Walker and Ted Marriot, to make the sale. The whole cast had a fearlessness that one cannot help but hold great admiration for and considering what the play requires of each actor, the cast were incredibly impressive. They were required to simulate, amongst other things, an oral and anal sex scene. Jamieson and Marriot faked orgasms that were worthy of comparison to that scene in When Harry Met Sally. In all seriousness, there were extremely disturbing scenes, including a brutal rape fantasy, which was delivered flawlessly. Every role was physically and mentally demanding, and strenuous. In fact, there were times I feared a little for the actors and how they might be psychologically affected by what they were required to act out.

McClelland’s Shopping and F***ing is an unforgettable piece of theatre. Even after the memories of the onstage violence, drug abuse and sex start to fade, the truly stellar performances and impact of this production is remembered in its entirety, and is a production of which the students involved should be extremely proud.