Why Wheelchair Basketball was a Fantastic Spectacle for Varsity Basketball

For all of the excitement of the men’s and women’s Varsity Basketball games on Friday 22nd April at the Motorpoint Arena, one of the more refreshing moments of the evening was the applause and cheering generated by the wheelchair basketball exhibition, which showed the growing popularity of the sport.

In a tightly contested game, Nottingham Trent University’s (NTU) Wheelchair Basketball team beat the University of Nottingham (UoN) Wheelchair Basketball Team 11-6. The first-half started frantically, with both teams having chances to grab the first points of the game. Trent took the first points after three minutes, and stretched their lead to 4, before UoN struck to reduce the arrears to two just before half-time.

“An exhibition it may have been, but it was evident that it mattered to both teams”

Early in the second-half, Trent showed their quality with two quick-fire scores, and while UoN again reduced the arrears to just two points, when Trent took the game to 11-6, UoN could not break their staunch defence, and Trent held on for victory. 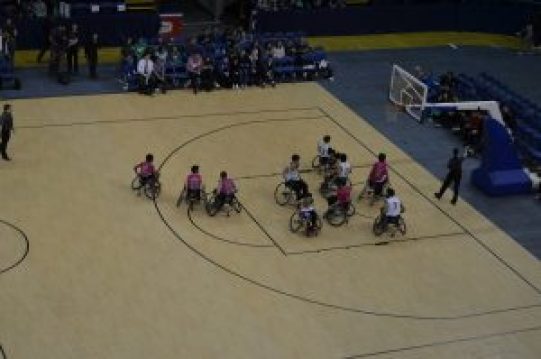 The game, consisting of two eight-minute quarters between the women’s and the men’s games, was cheered on ardently by the crowd, and what was striking was how fiercely contested the game was for both sides. An exhibition it may have been, but it was evident that it mattered to both teams.

“To bring such sports in, either as exhibition or as a full event, grants a greater dimension of sports players to play a part in the series”

The Varsity Series does provide a unique opportunity to promote sports of this nature, with players who would not normally get the chance being able to play in front of huge crowds, and cheered on by their peers. Such publicity can only serve to help the numbers of those participating in wheelchair basketball as a whole.

Also for the Varsity spectacle as a whole, to bring such sports in, either as exhibition or as a full event, grants a greater dimension of sports players to play a part in the series, which itself becomes more inclusive.

Personally, having watched Friday’s game, having Wheelchair Basketball as a third Varsity event would be a welcome addition, and would help to promote more sports of this nature to be considered for inclusion. For that reason alone, surely it is time to consider the notion of making the game worth a Varsity point?

The advent of the Super Wednesday format for this year has given a number of sports who have never had an official Varsity event the chance to contribute to the overall score; placing wheelchair basketball within this format, in some manner, could be an avenue to explore.

For now, however, we can marvel at the excitement of a sport I would not have normally found myself watching; thank god for Varsity giving me the chance to.

For all the updates of the 2016 Varsity Series, click here.

Karni fundraising suspended over summer in line with new legislation