Brighton based alternative indie outfit Penelope Isles have began taking England by storm. Their recent performance at Y Not festival was startling, showing that the debut album Comfortably Swell is as impressive live as on disc. Impact had the pleasure of interviewing three quarters of the band after their set at the festival:

Impact: First of all, can you give us some background for the readers?

Lily: Yeah, I’m Lily, hi! Jack is my brother, who sings and plays guitar, Becky [Redford] is our bassist/guitarist, and other Jack [Sowton] is on drums, we call him J for short. They’re both good friends who help us lots!

Jack Wolter: We formed about a year ago, and have just self-released our first album.

I: Cheers! Also, Penelope Isles? How did that name surface?

L: Well, mine and Jack’s mother is called Penelope, and Isles because we’re from Isle of Man!

“We didn’t expect to have half the crowd we had”

I: How did the set go for you today?

JW: Yeah man, wicked I think! We played some new songs and they had as good a response as our released songs; we were stoked to see the tent so busy, considering we were the first band on the early-bird day. We didn’t expect to have half the crowd we had.

I: Glad to hear you enjoyed it, we felt you killed it from where we were! Are festivals worth the hassle and lack of payment?

L: Thanks! And yeah I’d say they’re definitely worth it, you’re right about, like, not being paid, but they sorted us out with booze, and we’ve not played north of London before so it’s a wicked new experience.

Becky: Yeah I agree, it’s so nice to see new areas and I haven’t been to this festival before. BIMM really sorted us out, we’re grateful for that. Kinda hate camping though.

JW: Same, I’d much rather be at home watching first dates with a spag bol brewing.

“We’re new, and the more people that hear our songs the better”

I: Rock and roll. What’s your opinion on Spotify and other streaming services? Some artists hate it.

JW: Yeah… I don’t understand their hate. In my opinion, we’re new, and the more people that hear our songs the better. We get next to nothing from it, like 0.00-something pence per play I believe, but if it gets our name out there and gets us a fan base and new opportunities, it’s always worth doing. Same with free gigs and festivals really, although we would enjoy being able to reach new heights, and to tour, which requires funding of course.

I: We have really enjoyed Comfortably Swell and thanks for chucking us a free EP! It looks wicked, are they homemade?

L: Yeah! They took me fucking ages man, we made like fifty or so, and have just dished them out at gigs and to friends, press, etc.!

JW: We feel it’s important to offer something unique, and the DIY way also means everything is done exactly as we want it to be, and that’s how we want to keep things, in the studio and beyond! 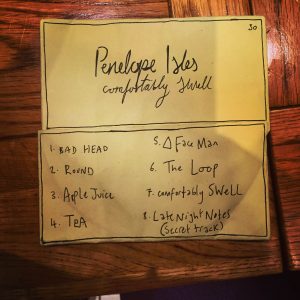 I: So you produce the records yourself then?

JW: Yeah! Like I said, we want to keep things as personal as possible, so I’ve been learning the art of recording and mastering. [We’ve] spent a lot of time on it but we’re pleased with the results. Lily and I will record all the songs between us; title track ‘Comfortably Swell’ came entirely whilst hanging out at home with our instruments, for example.

Live, we are conscious about changing up our songs slightly, whether it’s playing with the structure, changing a line or two or whatever… it keeps it exciting, and we always loved watching bands when they’d play something slightly differently to the record.

I: Is that why it’s the title track then? Because it’s so close to home and very ‘in the moment’?

JW: Yeah I guess it could be, it just sounded right really.

I: Very nice, you also mentioned watching bands… do you have any stand-out inspirations?

L: Jack and I listen to a load of The Magic Numbers, Growlers… we’re really into Elk at the moment also, they’re well worth checking out!

JW: Magic Numbers are a big inspiration for me, as are Radiohead; ‘In Rainbows’ in particular is one of my favourite albums. But I guess we take bits from anything we enjoy ever really!

“We hope to record our new songs properly, hopefully with an EP around Christmas time”

I: What’s the goal for this time next year?

JW: We hope to record our new songs properly, hopefully with an EP around Christmas time, but we’ll hold on until it’s perfect. We want to raise some money to be able to tour and support other acts, get around the UK as much as we can, and to play more festivals. We’re also looking to push the PR and just get ourselves known more. It’s exciting!

L: A definite goal is also to try and get around without needing BIMM [British and Irish Modern Music Institute]: as brilliant as they are for helping bands start up, we feel we’re ready to try and fly our own flag, so yeah, just getting into new areas! We also want to explore using new instruments in our songs. I play saxophone and harp, and I’ve written for choirs before – I used to be routed around classical music – so it’d be wicked to experiment with bits of vocal arrangement or sax or something in our tracks.

I: Sounds wicked, thanks for coming to chill with us in this wind! Anything else you want to add?

L: Yeah! We’re playing at Knee Deep Festival (Cornwall) on August 26th and Together The People in September. We also have plans to host a big old gig on 24th of October at Green Door Store in Brighton, it’s one of our favourite places, and we want to put on a huge one!

JW: Yeah! 24th of October is something we really are looking forward to!

B: Oh and if anyone fancies giving us a load of money, that’d be wicked!

Listen to Penelope Isles on Soundcloud