Book Of The Month: September 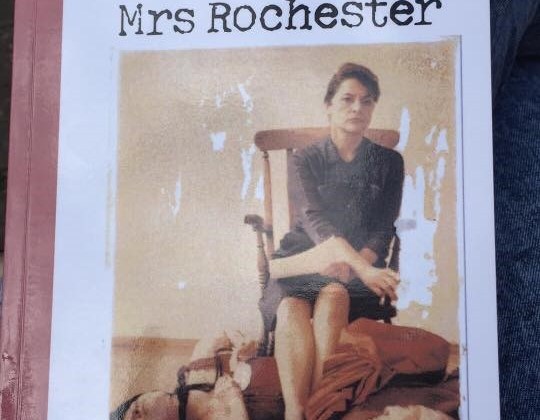 Impact Arts goes rogue this month, featuring a play rather than a book for this edition of Book Of The Month. What better way to celebrate all things Bronte than sinking your teeth into a work whose brilliance was inspired by Charlotte Bronte’s Jane Eyre? A must have on the bookshelf of any Bronte lover.

”In two acts, Rhys’ life is panned out in front of us… Or is it Bertha’s?”

After Mrs Rochester is a play that ties Brontë, Rhys and Teale together, showing the life of Jean Rhys and her true connections to the original Jane Eyre character, Bertha Mason. Set in one room in the Devon countryside, Teale creates her own ‘madwoman in the attic’ who refuses to open the door to the rest of the world. In two acts, Rhys’ life is panned out in front of us… Or is it Bertha’s?

Whilst Jean’s daughter is trying to get onstage, banging on the locked door, Rhys’ life is played out through Jean’s imagination. Ella, the younger version of herself, encounters prominent characters in Rhys’ life, alongside interruptions from Brontë’s Rochester, Jane and Bertha, acting scenes from Ella’s favourite book: Jane Eyre.

”Although Brontë’s character begins simply sleeping and muttering, she crescendos into a large, mad authority, reiterating Jean’s lines, or even speaking for her”

As Jean Rhys was obsessed with Jane Eyre, in particular Jane and Bertha Mason, creating her own adaptation of Bertha’s life, Wide Sargasso Sea, Teale sets to capture their connections and their inherited madness through the eyes of Jean’s imagination. Throughout the entire play Bertha remains on stage, despite being a figure of the character Jean’s imagination. Although Brontë’s character begins simply sleeping and muttering, she crescendos into a large, mad authority, reiterating Jean’s lines, or even speaking for her. This inevitable presence of Bertha is not forgotten, with Jean’s younger self demanding why she must stay. “You brought her”, we find out, showing the true connection between Rhys’ and the fictional Bertha’s lives of madness.

Although Jean and Ella struggle and literally wrestle with their alter-ego, Bertha, their own madness becomes equally as dominant throughout the play, heightening to a point where Rhys herself must be locked up.

The play isn’t long, but it won’t let you put it down when you read it. The pace is quick, flitting between the past and present of Rhys’ life, a pleasure for any Jane Eyre or Wide Sargasso Sea fan. It would be recommended to read both texts before tackling Teale, not for understanding, but simply to gain a larger insight into the references made to the two fantastic pieces of literature. Teale, herself, has created an incredible adaptation that will leave you wanting more.

Easily 10/10, alongside women and madness literature such as Sargasso and The Yellow Wallpaper.

The Sound of Music @ Theatre Royal