Book Of The Month: November 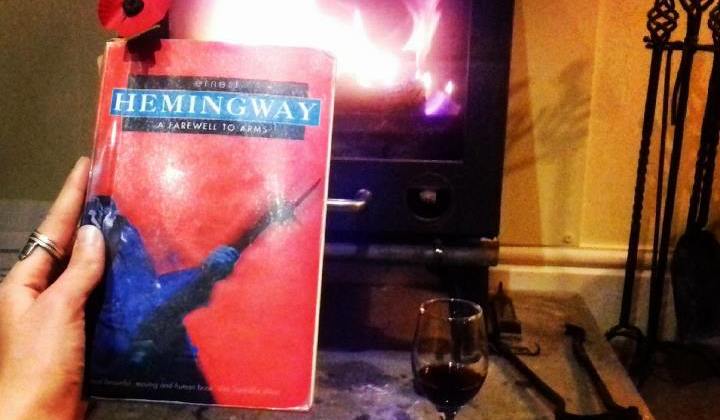 ‘I ate the end of my piece of cheese and took a swallow of wine. Through the other noise I heard a cough, then came the chuh-chuh-chuh-chuh – then there was a flash, as when a blast-furnace door is swung open, and a roar that started white and went red and on and on in a rushing wind. I tried to breathe but my breath would not come and I felt myself rush bodily out of myself and out and out and out and all the time bodily in the wind. I went out swiftly, all of myself, and I knew I was dead and that it had all been a mistake to think you just died. That I floated, and instead of going on I felt myself slide back.’

Title: A Farewell to Arms

One hundred years ago today, on the 11th November 1916, The Battle of the Somme had be raging on for four months. The British had introduced tanks, for the first time, onto the battlefield. Italy had recently declared war with Germany. The Battle of the Somme would leave one million dead or severely injured before its end eight days later. These are just some of the things to reflect on this Friday 11th November.

”We see the terror of the war’s relentlessness but we also we also see the support network soldiers provided one another, as well as a deeply passionate relationship between our narrator Frederic Henry and his lover Catherine”

If you want to explore how these horrors were written about in the wake of the war, or if you’re just looking for a break from those dense course books, then you should turn to Hemingway’s A Farewell to Arms, one of the most celebrated novels to come out of the First World War. This novel is incredibly human. We see the terror of the war’s relentlessness but we also we also see the support network soldiers provided one another, as well as a deeply passionate relationship between our narrator Frederic Henry and his lover Catherine.

Unlike many other films and novels on the First World War, in A Farewell to Arms the action is displaced away from Flanders Fields and plunged into the midst of the war in Italy, where Hemingway himself had served in the ambulance service. This, however, does nothing to distract from the war’s devastating effects on the characters within the novel.

”The novel explores one of the fundamental concerns for people wishing to write about the war: How can is it possible to put into words the indescribable?”

One of the defining features of the novel is the matter-of-fact and brutally honest style that Hemingway gives Frederic Henry. Henry’s lack of emotional involvement in his descriptions only heightens the complete disorder of his wartime world. The novel explores one of the fundamental concerns for people wishing to write about the war: How can is it possible to put into words the indescribable? At one point, Henry notes that words such as ‘glory’, ‘honour’ (I can’t bring myself to use the American spelling) and ‘courage’ were entirely devoid of meaning and had become, to him, obscene when faced with the reality of his own experiences. So, Hemingway’s choice to focus on dialogue and action, rather than dipping too far into the interior life of Henry, is his way of producing an uncontrived work about the war. He, therefore, allows the reader to make their own meaning out of the surface descriptions and attach our own perceived emotions to certain events in the story.

Nevertheless, this style didn’t impede the novel in its presentation of the intense relationship between Catherine and Frederic. It must be said that this storyline gave a certain amount of welcome relief from the fighting and devastation – well, it does until this aspect of the plot throws up problems of its own.

”Most importantly, it is such a poignant book to read coming up to the 11th, a whole century after the events happened”

A Farewell to Arms is just the right mix of action and romance, of heartstrings tweaking and light-heartedness, and of good writing and quick, easy reading. Most importantly, it is such a poignant book to read at this particular time, a whole century after the events happened. In commemoration, instead of watching War Horse for the umpteenth time, maybe this year take a look into the war poetry or war literature of the First World War.