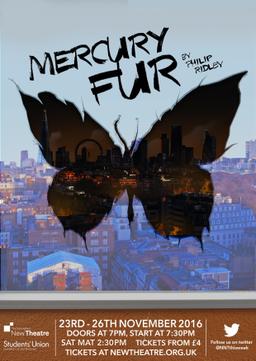 Dystopian doesn’t even begin to describe the terrifyingly dark play that is Mercury Fur. Think Black Mirror, but the scare factor and intensity x10. Joe Strickland and James Collyer have fantastically directed and produced the eerie, post-apocalyptic future, that scarily makes you think could come true.

Despite there being no interval for the 120 mins long production, the play has clearly had a lot of time and effort put into it to make the time pass so effortlessly.

”What this play begins to question is how far people, and humanity in general, is willing to go in order to save the ones you love”

Mercury Fur is set against the backdrop of East End London, where gang warfare and drugs; in the form of dangerous hallucinogenic butterflies, rule the streets. The narrative focuses on a group of gang friends and how they survive in such a terrible world.

They hold ‘parties’ for the rich and powerful, where they can live out their wildest fantasies in the form of torture and violence. Brothers Elliot (Maddy Strauss) and Darren (James Curling) have been placed on a tight schedule, as the party has been brought five days forward, ultimately meaning that the party is not going to run as smoothly as intended.

What this play begins to question is how far people, and humanity in general, is willing to go in order to save the ones you love. With the play notoriously known for its radical subject matters, I feel that I have to warn anyone before going that if you are not a fan of violence, abuse, drugs or warfare then this is not a play for you.

Also, Ridley’s work likes to use expletive language, almost so much that it felt like every other word in the play was a character swearing. It was clear from walking into the theatre, that this was not going to be a light-hearted play. The derelict, abandoned flat that was chosen for the party, was well shown through the props on the stage.

The small touches of litter scattered on the floor, to a non-working light switch invoked an apprehensive atmosphere from the outset. Another feature that should be mentioned is the good use of lighting, which thanks to Nathan Penney’s work helped set the mood of the piece.

”James Curling highlighted the terrible effects that drugs (or butterflies in this case) can have on your mental health, whilst also portraying a likeable character”

The close and emotional relationships between the characters is what sets this play at such a high standard. On several occasions there are only two actors on stage, and the very fact that the audience was so engaged throughout tells you the level of ability they had.

Maddy Strauss and James Curling’s brotherly relationship was so sincere, and it was clear through all of Strauss’ anger and frustration at the world they have to live in and the way they have to survive, that there was a genuine love and care for her younger brother Darren.

James Curling highlighted the terrible effects that drugs (or butterflies in this case) can have on your mental health, whilst also portraying a likeable character, who was obviously disturbed with the work he had to fulfil in order to survive.

”It needs mentioning that this production would not have been as successful, had it not been for every single actor portraying their role beautifully”

A stand out role I must say has to go to Jonny Khan’s portrayal of Naz. He was able to lift the mood and make the audience laugh at a time where it felt like there could be no happiness. His innocence and ill-founded trust in the gang, he coincidentally came across, made him such a loveable character for the audience to emotionally feel towards.

It needs mentioning that this production would not have been as successful, had it not been for every single actor portraying their role beautifully. We did not just see them as unlawful and horrific versions of people, but saw them as humans, and could really understand their motivations.

A play that sees Maddy Strauss take on the role of a male protagonist, Boo Jackson play a blind woman who refers to herself as the Duchess, and Charlie Jamieson be almost reminiscent of Tom Hardy’s portrayal in Legend, is one that is worth seeing.

Just keep in mind that this is not a play for everyone. You need to prepare yourself for what is to come, and accept the fact that you will never see butterflies the same way again.

‘Mercury Fur’ is running at the Nottingham New Theatre until Saturday 26th of November. For more information and where to find tickets see here