Book Of The Month – December: Dawn of the Unread

Title: Dawn of the Unread

Nottingham has had a long-running literary history, as shown by its status as a UNESCO city of Literature. Utilising the talents and individual styles of a variety of writers and artists in a series of loosely connected comics, Dawn of the Unread tells the stories of these famous figures from Nottingham, both real and fictional, uniting from beyond the grave to save Nottingham’s libraries and their own legacies.

As with all collaborative projects like this, some of the combinations of text and art work is better than others; some of the comics had me captivated throughout whereas others were a struggle to get through due to the strange subject matter or distracting artwork. However, all of the comics should be highly commended for their experimental (and sometimes just plain crazy) plots and styles.

”Ferencz’s style of art in this comic is both highly evocative and beautifully simplistic, which really adds to the touching quality of the story and the way it deals with relationship struggles’’

Some of the more ‘out there’ comics include Byron Clough by Andy Croft and Kate Ashwin where a character is created that is a combination of the poet Lord Byron and “gobshite” football manager Brian Clough which, despite its seemingly ridiculous premise is actually incredibly funny and intriguing, and Psychos by Nicola Monaghan and Judit Ferencz where Alma Reville, the wife of Alfred Hitchcock, talks to a girl who is taking part in an illegal drug-fuelled rave at a disused library. Ferencz’s style of art in this comic is both highly evocative and beautifully simplistic, which really adds to the touching quality of the story and the way it deals with relationship struggles. 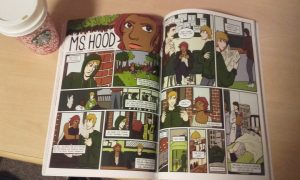 One of my personal favourites in the collection is Ms. Hood written by Aly Stoneman with art by Amanda Elanor Tribble. Modernising and distorting the traditional quintessentially Nottingham story of Robin Hood, Stoneman creates a poem inspired by Carol Ann Duffy’s The World’s Wife where Rob ‘Hoody’ is a political activist. Not only does the text itself stand as a fascinating piece of inspired poetry that is poignantly relevant but the simple yet colourful imagery that accompanies it kept me reading until the final frame.

Despite the beautiful illustrations and overarching theme that runs through most of the comics, the stories themselves are self-contained and vary in quality, therefore this may not suit an avid lover of comics or graphic novels and I was occasionally left reading in anticipation for the next comic, or a continuation of the storyline which seldom came.

However, if you want to explore and understand Nottingham’s extensive and varied cultural heritage then this book serves as a brilliant starting place; introducing Nottingham heroes you may not be aware of (before reading, I had no idea who Mary Howitt or Stanley Middleton were) alongside favourites like DH Lawrence, who stars in the comic DH Lawrence- Zombie Hunter!

Definitely give it a go, it will no doubt entertain you, but use it as a stepping stone to other works of fiction. Maybe you will read about an author whose books intrigue you, or find an artist whose works you’d like to read again.

An Introduction to: Dubstep