Book Of The Month: March 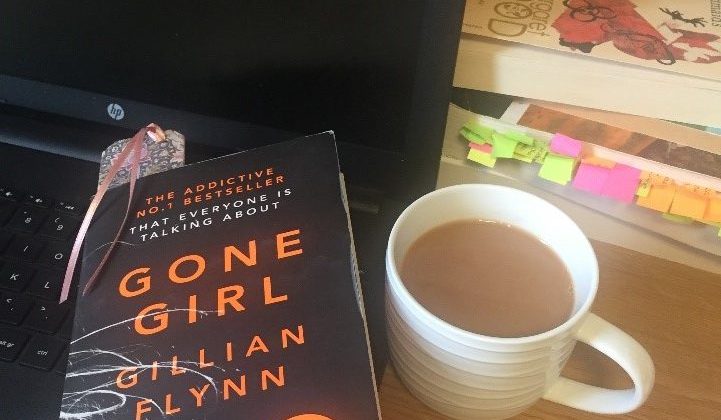 Gone Girl is best known by its critically acclaimed film adaptation which hit the screens in 2014. The popularity of the film spurred more people to turn to the original book and with the copies flying off the shelf, it’s no wonder that Gone Girl made it on the New York Best Seller list.

In a very simplified, no spoiler-alert summary, Gone Girl is about a husband and wife: Nick and Amy Dunne. On their 5th anniversary, everyone’s favourite, much-loved Amy goes missing and with Nick acting a bit odd about the whole situation, suspicions begin to arise that it is him who has killed his wife. BUT THERE IS A MAJOR PLOT TWIST. DUN DUN DUNNNNNN.

”And trust me, Flynn takes this to a WHOLE new extreme!!”

Gillian Flynn is an author well-known for her dark, psychological thrillers, and as time goes on her books are only becoming more and more popular. Flynn divides the book into two major themes of romance and murder, primarily based around feeling of love and hate. This element is used to challenge societies ideals of relationships and how behind the scenes, people aren’t the same as they portray themselves in person. And trust me, Flynn takes this to a WHOLE new extreme!!

”This, for me is a clever technique used by Flynn as it means we only see what’s going on at one time for one person”

This psychological thriller had me and many other readers on edge through every turning of a page! For me this was mainly achieved by Flynn’s narrative layout. The narrative is split up into sections expressing the viewpoint of Nick and Amy in alternative diary-like entries. For me, this is a clever technique used by Flynn as it means we only see what’s going on at one time for one person. So when Amy goes missing we only hear from Nick and not Amy until later on in the book.

This provides more suspense and makes it harder for the reader to figure out who’s responsible for Amy’s disappearance. In fact, for me, after many years of my childhood spent figuring out the villains in Scooby-doo, I thought I’d be a pro at solving Amy’s case. But I never did figure it out until she revealed all.

”Most people have had relationship struggles or have been hit hard by the economy or coping with societal expectations, meaning Gone Girl is a book for everyone”

What makes the book so appealing is not only its obvious elements of surprise and suspense, but some of the content is very relatable to both men and women in everyday society. Most people have had relationship struggles or have been hit hard by the economy or coping with societal expectations, meaning Gone Girl is a book for everyone, as we can all relate in some way to its narrative. It’s just that we don’t all know a psychopath who tries to destroy your life. That bit relies more on the imagination.

With rumours of a possible sequel following in the next few years, Gone Girl is a book which should deffinatly be added to your reading list. Or if films are more your thing, it does stay true to the book so the narrative is identical, plus Nick is played by Ben Affleck so I mean why wouldn’t you?

Crucial times ahead at Meadow Lane