Ghost in the Shell: A Hollow or Full-Bodied Remake?

With possibly one of the most controversial production periods of the last few years and a disappointing opening week box-office gross, I think it’s fair to say Ghost in the Shell is garnering a bad reputation. This is only emphasised by the fact that the original anime film is considered to be a masterpiece with a complex philosophy of what it means to be human or AI. So, does the new live-action adaptation fall under the weight of the original and the controversy? Or does it stand on its own as a compelling piece of film?

As a film critic, I try to view each film objectively and go into the cinema with an open mind. The role of the critic is to assess whether a film is good or not by observing its technical and story accomplishments or failures. However, I couldn’t ignore the elephant in the room when it came to Ghost in the Shell; an elephant known as white-washing and the subsequent discussions and plans to CGI Scarlett Johansson’s face to alter her ethnicity. Thankfully, Paramount studios didn’t go through with the latter. 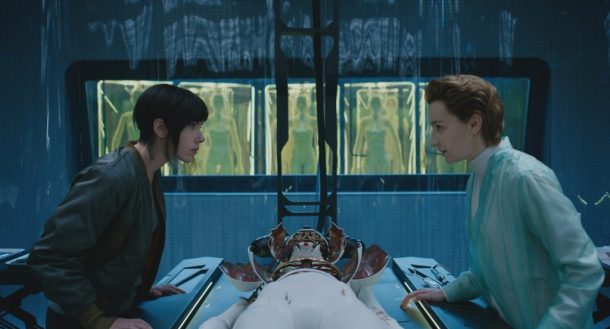 The director of the original anime film, Mamoru Oshii, has openly expressed that he didn’t expect a Japanese actress to play the lead role due to the understanding that a Hollywood film has to be adapted to a Hollywood audience.

His understanding of the story is that Major’s robotic character has changed her identity from her previous self due to her forgetting her background and would therefore have no perception or recognition of race. You could also argue that due to the lead character being ‘cyber-enhanced’ and closer to a robot than a human, they don’t necessarily have a specific race or ethnicity.

Oshii’s response might amplify the argument that there is a lack of representation of Asian actors in Hollywood. However, a large proportion of the cast still consists of Asian actors, most notably Takeshi Kitano who plays a character as equally enjoyable as the one he portrays in the cult classic, Battle Royale.

The debate on the white-washing controversy could go on in circles, with no end in sight. Instead, I’ll consider Ghost in the Shell as a film, ignoring the context and truthfully assessing its merits and its flaws as a mere collection of moving images that are trying to tell a story.

If there is one aspect that Ghost in the Shell excels in, it’s the visuals. The cinematography and the large sweeping shots of the futuristic city are nothing short of breathtaking. Visual effects are blended seamlessly with real physical backdrops to create a world which appears fully-realised and developed. Hologram advertisements materialise from everywhere and populate a city which seems not too far in the future from something such as Times Square or central Tokyo.

As well as the bright, colourful establishing shots, the close-ups are filmed with a soft touch setting which adds to the intimacy of moments when Major tries to discover who she is. The action scenes, especially ones recreated from the anime, are expertly filmed and provide a treat for fans of the original to see some of the iconic moments come to life. Despite only being his second major film, director Rupert Sanders proves himself to be more than competent behind the camera.

Where the film falters is through flaws with the narrative and tone. The original is more of a philosophical piece than a sci-fi thriller and, whilst some of the complex ideas that make up the original remain in tact, they are significantly simplified.

Although these ideas of what it means to be human are what elevates the film from being a forgettable affair, the oversimplification keeps the film from sustaining a high level interest and engagement. There is an attempt to flesh out the character of Major by focusing on her backstory, and this does pay off to an extent.

Seeing more of her past adds a slight emotional depth, but nothing to really hook the audience beyond what the anime accomplished. The anime appreciated the audience as capable of deciphering it by themselves; the adaptation is fairly on the nose. 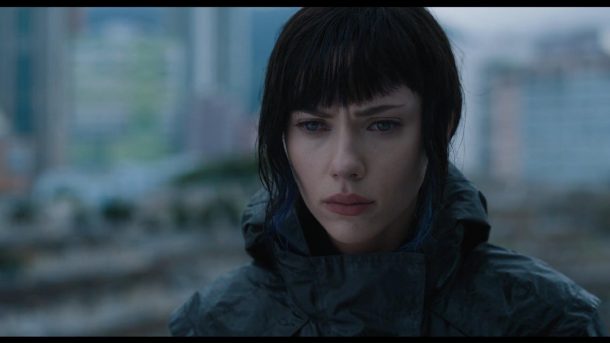 The second act of this film is by far its strongest. This is due to certain reveals which alter perceptions established in the first half. However, this also means the film peaks at about an hour through its runtime, making the finale seem underwhelming.

The story doesn’t take time to breathe for the first forty-five minutes; filled with action sequences, plot and exposition, it makes it difficult to truly engage with the characters until the hour-mark. After this point, the film devolves into something which feels a little generic, substituting what makes its villain intriguing to make them appear as bland.

“Visually stunning and with some good action scenes, performances and some light philosophy”

Still, there are many good things to be said about Ghost in the Shell. The score for the original film was outstanding and haunting; the new cyber-punk and electronic score equals the original. It retains the creepy tone but with the added electronic soundscapes, it emphasises the believability of the futuristic world.

The acting is also generally good, especially from Scarlett Johansson in the lead role, who blends and balances a sympathetic yet still robotic performance. This is by no means a masterpiece, but, if you were to pay for a cinema ticket, the chances are you’d walk away satisfied.

Verdict: A shell, pun intended, of the original anime film but still very much a capable and interesting adaptation. Visually stunning and with some good action scenes, performances and some light philosophy thrown in for good measure, it’s certainly a decent sci-fi flick. However, with tonal inconsistencies and a weak finale adding to a film which feels underwhelming, Ghost in the Shell may indeed be buried and only remembered through its own controversy.