At a time when borders are becoming increasingly more talked about than unison, The Nottingham Alternative Film Network put together an evening dedicated to the understanding and celebration of immigration.

On March the 19th, at The White Lion Bar and Kitchen pub in Beeston, the Nottingham Alternative Network put together an evening showcasing a number of fiction and non-fiction short films about immigration. This event was one of the many that the Film Network have held at the pub, in an upstairs projector room fitted with velvet chairs and with low lights on the side, reminiscent of a cinema.

The event Film Sans Frontieres acted as a fundraiser for Medicins Sans Frontieres, and the biggest theme of the evening was undoubtedly people helping other people at the direst of times. In the end, the organisers were able to raise upwards of £500 for the cause.

As for the actual event, after a brief introduction we were immediately catapulted into the short film A Man Returned, one of the most thought-provoking documentaries about the refugee crisis I have ever seen. This followed the previous installment, also shown at the event Xeno, where we see the same character narrating some of his experiences as a refugee in Greece.

“The film is a wake-up call to the Western world”

The filmmaker follows the protagonist Reda Al-Saleh, after spending his years spent in Greece as a refugee, once he returns to the Palestinean refugee camp of Ain El-Helweh after being deported from abroad. His struggles in Greece make him develop a heroin addiction he carries back home. The way he treats heroin is shocking and akin to how many of us would treat casual smoking: his family is aware of it yet he constantly repeats to them that he will soon quit. Reda also paints the camp he lives in as a nasty and unforgiving place; we see him often leave his house armed and dealing drugs to keep his head above water.

Regardless of this terrible situation, the film revolves around his planned marriage to his childhood sweetheart in the camp, which occurs at the end of the film in a bittersweet sort of ending.

What most struck me about this film is that it offers a window into a part of the refugee experience we don’t often see in the media and often we do not think of: what happens after deportation? While we see a harsh environment, being torn apart by a drug world Reda himself is involved with, and affected by the war in Syria, the protagonist is almost more optimistic about his life here than he was in Greece.

“The Network always try to showcase stories with human characters”

In fact the glimpses Reda shares about his life in Greece almost seem to have been more detrimental to him than his life in the Palestinean refugee camp, for example Greece is where he developed his heroin addiction. In contrast, his life in the camp is filled with optimism where he promises to drugs and soon, to get married.

The film is a wake-up call to the Western world about the way our treatment of refugees can cause them to idolize some terrible situations. It really questions humanity in the midst of one of the world’s worst humanitarian crises. 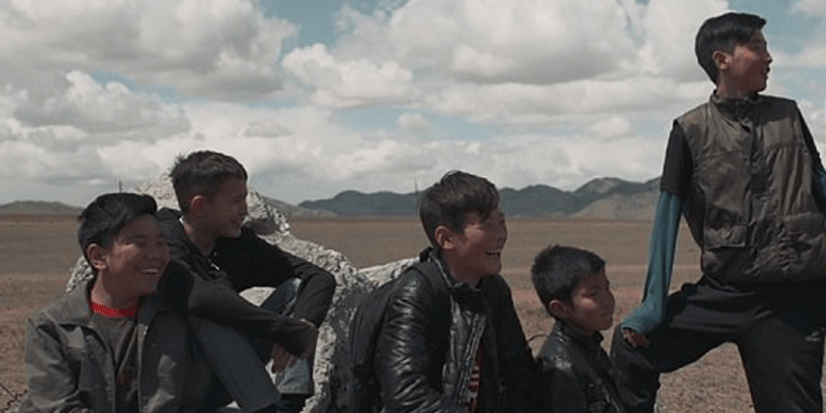 As the evening continued, the films delved more and more into themes of humanity and xenophobia. After a (delicious) vegan meal downstairs, we returned to see various other shorts, mostly fictional this time, that deal with refugees and immigration. A particularly shocking one was Patriot, which depicts a little girl caught by her extremely patriotic family while playing with a Romany boy. Her attitudes towards the little boy instantly become aggressive after incurring her family’s prejudices, to the point where she accidentally physically assaults the boy. I appreciated the message that the short was trying to express, that xenophobia is not something we are born with, but rather something developed from cultural preconceptions.

“The common thread of most of the events is empathy and coming together, through film”

At the end the evening turned on a slightly more positive note, when we were shown the short I Volunteered on a Migrant Ship, shot by Nottingham resident Alva Whire (who was herself at the event) volunteering with MSF in a ship in the Mediterranean. It’s more a daily blog than a structured documentary, nevertheless the raw footage depicting the lengths that some people go to to help others was truly inspiring.

This was just another event in the NAFN calendar but it’s easy to identify a common thread between their showings. After speaking to Sanpreet Janjua, the Network’s co-director, she revealed that the Network always try to showcase stories with human characters, outside of what a lot of mainstream cinema has to offer. This is clearly no exception. Their primary objective is to showcase these types of films that would otherwise not be accessible in the Nottingham area, and they often are inspired by current events, such as showing The Reluctant Revolutionary by Sean McAllister which follows family man Kais Al-Qalisi in Yemen during the Arab Spring.

But above everything else, the common thread of most of the events is empathy and coming together, through film, to understand situations to us unimaginable, and when possible offer a lending hand. This is why all proceeds from their Revolutionary event went to Kais’ family and why all proceeds from Film Sans Frontiers have gone to Medics Sans Frontiers. Sanpreet has declared this last event as a highlight for the Network, and I for one am excited as to where they will go next.

Media from “A Wonderful Flight” and courtesy of NAFN.

Ghost in the Shell: A Hollow or Full-Bodied Remake?