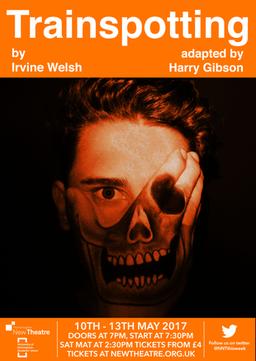 This production of Irvine Welsh’s infamous novel immediately immerses the audience in its vibrancy and intensity. As soon as the audience enters the room, even before finding their seats, the tone  is made clear. The cast members use the stage as a night club, dancing up to you as you emerge into the theatre. Music blaring, psychedelic disco lights encompassing the room in colour and chaos. It is immediately clear that this is a production not to be missed.

”A complete variety of emotions is present: hilarity, outlandishness, disgust, each delivered with a great sense of conviction”

Trainspotting follows heroin addict Mark Renton and his equally outrageous and egregious friends in their drug fuelled revelry in 1990s Edinburgh. From nights at the pub to tragic deaths, Mark narrates the audience through this intense stage of his life. A complete variety of emotions is present: hilarity, outlandishness, disgust, each delivered with a great sense of conviction: with the audience laughing uncontrollably in one moment, to covering their eyes to obscure from more distressing scenes in the next. Most notable however was the sincere delivery of the climatic, raw and emotive moments during which the cast were faultless.

”The cast, made up of only four actors is outstanding”

The cast, made up of only four actors is outstanding. At times the harsh, Scottish accents could be difficult to decipher but overall were impressive. The size of the cast caused each actor to multi-role with minor parts but also other major protagonists. Such changes were incredibly effective and made clear through change of both costume and accent, the ability of the actors to produce varying Scottish accents unique to each new part was very persuasive and notable. In particular, Chris Sharp-Paul (Mark Renton) was magnificent.

”A blocked, dirty toilet sits permanently on stage in anticipation for that scene which was executed masterly, albeit unpleasantly”

An innovative use of props, lighting and stage effects was adopted. Big, bulky televisions sat either side of the stage, on which the emotions of the protagonists were mirrored: from a psychedelic fair ground during the chaos following a hit of narcotics, to ‘Mother knows best’ in glitchy block letters during a period of attempted sobriety. A blocked, dirty toilet sits permanently on stage in anticipation for that scene which was executed masterly, albeit unpleasantly (not one for the squeamish!) The use of lighting and music furthered the encompassing atmosphere on stage, with dim, flickering lights during scenes of drug use and grief contrasting to moments of brightness and clarity.

This is an intelligent, humorous yet raw production- Choose a play. Choose this play.

‘Trainspotting’ is running at Nottingham New Theatre until Saturday 13th May. For more information, and to book tickets, see here.