Death Note – A Whitewashed Reflection of a Beloved Anime

Since its debut in 2006, Death Note has become one of the most successful and well-known animes worldwide. It is therefore unsurprising that director Adam Wingard made the decision to create a feature-length production based upon the original Japanese work.

Yet the term ‘based on’ must be used loosely, as save for the name, a few key characters, and the book itself, the film is nothing like the anime, and even these similarities can be scrutinised. For instance: the key characters. No longer do we have Light Yagami, the cool-headed, overly intelligent Japanese student, but instead we have Light Turner, a much dumber social outcast trying to keep his head down in a typical American High School. Similarly, Misa Amane is no longer cute and annoying, but is instead Mia Sutton, an increasingly psychopathic cheerleader more obsessed with the Death Note than with Light.

“the film deviates from the original plot entirely”

In the same way, the Death Note itself has also undergone a few changes, but (thankfully) only minorly so. The base rules are the same, but with added features: after 7 days of not using the Death Note, the Death God (Ryuk) takes it and passes it on to a new owner, and only the keeper of the book can see the Death God.

But it is the second rule that really caused a stir among Death Note fans as, in the anime, anyone who touches the book can see the Death God, and it is through this feature that people instantly believe in the notebook’s power. Yet as the film deviates from the original plot entirely, this feature doesn’t impact on the movie itself, and the change simply annoys anime fans.

However, it’d be wrong to say that the movie is entirely awful. The depiction of Ryuk for instance, is brilliant; not only do they use blurring and partial shots to make his form more menacing, but even when seen in all his glory he is a truly terrifying masterpiece, properly befitting his role as a ‘Death God’.

Also, the acting of Lakeith Stanfield, who plays L, is near perfect; not only does he masterfully perform all of L’s well-known mannerisms, but his speech and interactions with other characters are entirely true to form.

Yet despite these positives, the film has come under harsh scrutiny for apparent whitewashing. Like the similarly-criticised film Ghost in the Shell, Death Note is an originally Japanese production: Light is a Japanese High Schooler, the name ‘Kira’, derived from ‘Akira’, is of Japanese significance, and the mythology of the Death God is a prominent feature in Japanese culture. The changing of setting from Japan to Seattle therefore has naturally caused a fair amount of uproar among fans, but there are arguments for both sides.

Kira, a name with Japanese significance, as used in the film Death Note.

Those defending the film claim that the casting of white actors as the protagonists is not an example of whitewashing, because the film is not set in Japan (unlike Ghost in the Shell), but in Seattle. It therefore purposefully changes the film to appeal to an American audience with features of American culture; for instance, we see the struggles of American High School, and the character of Light is changed in order to reflect a typical American High Schooler more obsessed with getting the girl than using the book for his own means – far different to the egotistical Light Yagami.

Yet the cultural features of Death Note are so intrinsically linked to Japan that this defence is ridiculous. Even if one were to believe these arguments, it still does not explain why our protagonists had to be white; America is not exactly a country of only one ethnicity, and there is a growing population of Asian-Americans who are still not receiving fair representation in modern media.

Personally, I cannot help but see the film as yet another example of whitewashing. The changing of Death Note‘s locale was both foolish and pointless; it stripped away the cultural significance of the beloved anime, and then became another example in the long list of whitewashed Hollywood films. 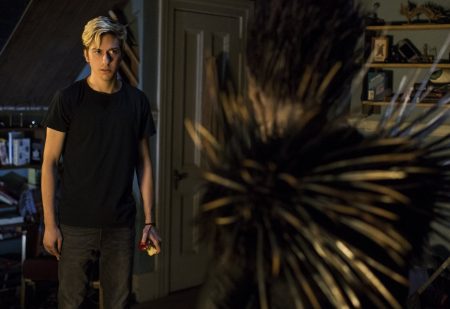 If you want to enjoy this film, I would suggest forgetting everything you know about the anime, and treating it as nothing more than a high school drama with a magic death book and a bit of private investigation; holding it up to the standards of the original anime will only ensure you see it as a horrible representation of the fantastic original work.