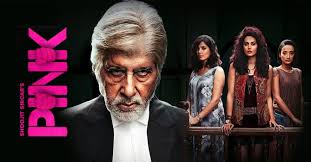 Pink is a feminist film that covers all bases, from universal issues of victim-blaming and rape myths to more specifically Indian ones, such as stereotypes faced by North-East Indian women. It succeeds as a social commentary without sacrificing character development, ensuring we feel each victory and loss of its leading women as both a personal and a political one.

“The gravity of their situation contrasts sharply with the women”

Pink begins in medias res. An injured man is frantically rushed to the hospital by his friends. Their journey is cross-cut with scenes of a cab-ride shared by three anxious-looking girls. The doctor informs the men that Rajveer (Angad Bedi) is severely injured and in need of stitches. The gravity of their situation contrasts sharply with the women, especially when Minal (Taapsee Pannu) washes a slight graze on her neck. Aniruddha Roy Chowdhury forces us into a half-informed, male-sympathetic gaze; Minal is the attacker and Rajveer her victim.

“Her motives are especially sympathetic”

However, this gaze is no sooner set up than it is undermined. The girls start to get stalked, they receive threatening phone calls and unsavoury pictures are sent to their workplace. Scattered bits of dialogue and subtext allow us to infer that Minal’s attack on Rajveer was a form of self-defence against attempted rape long before this fact is explicitly stated.

While Minal is adamant to show no remorse to Rajveer, Falak (Kirti Kulhari) urges her to appease Rajveer with an apology in order to put an end to the entire affair. Falak is not presented as weak or cowardly, but as a woman doing her best to navigate a system that is statistically biased against her. Her motives are especially sympathetic seeing as she loses her job due to the actions of the men. In the end, however, her affection for Minal prevails. When Rajveer aggressively slut-shames her friend, Falak snaps and tells him that the apology is off the table, vowing justice for his wrongdoings.

“Highlights how damaging rape culture can be”

Aniruddha Roy Chowdhury highlights how much more damaging rape culture can be in a country where social views are so deeply embedded into supposedly impartial state institutions.  Minal’s first attempt at filing a police report ends with the officer reprimanding her for going up to the boys’ hotel room in the first place. It is only with the help of her boss, who has connections with a high-ranking member of the force, that she can get her case seriously considered.

But Nepotism, as the women quickly learn, is a double-edged sword. Police officers arrive at their apartment not for further investigation into Minal’s case, but to arrest her for a trio of made-up offences, the most serious of which is attempt to murder. Rajveer’s high-ranking father has convinced the police to twist the facts so as to paint the women in a compromising and vicious light.

It is then that Deepak (Amitabh Bachchan) steps in. He is initially introduced as yet another threatening presence, taken to staring at the women from the apartment opposite. In actuality, he is a retired lawyer who wants to help the girls despite his faltering mental health. He is one of the few problematic elements of the film, as he perpetuates the notion that a man who makes women feel seriously threatened might easily turn out to be a ‘good guy’ after all. The figure of a brooding man with a mysterious and complex past is also a tad out of place in an otherwise realist film.

“Bachchan manages to pull Deepak off with great skill”

Although his characterisation may be trite, Bachchan manages to pull Deepak off with great skill.  His jittery physicality and stuttered speech are interspersed with intense glares, showing us a man who is internally fragmented yet nonetheless committed to a cause. He really steals the show during the court-room scenes. These are fast-paced, dramatic and packed with punchy one-liners. In other words, they are not realistic at all. But Aniruddha Roy Chowdhury’s sacrifice of realism towards the end of his film in lieu of an emotionally charged attack on India’s rape culture seems more than justified.