On the 1st of October, 90% of Catalans who voted in the region’s independence referendum voted in favour of secession from Spain, despite Spanish authorities shutting down polling stations and confiscating ballot boxes.

The Spanish government suppressed the referendum, calling it illegal, undemocratic, and unconstitutional. Despite this, Carles Puigdemont, President of Catalonia, declared the already semi-autonomous region to be wholly independent from Spain on 10th October.

Of course, this declaration of independence was rejected by Spanish authorities in Madrid, which proceeded to impose direct control over the region and removed Puigdemont and the rest of the Catalan administration from office – not before the now-former President proposed a suspension on “the effect of the declaration of independence to engage in a dialogue to reach an agreed solution”.

It sounds like an act of democratic suppression, a slap in the face of democracy. But as with all decisive political acts, there is much more to the story.

What really happened in Catalonia?

Three major factors mean the 90% who voted for independence does not make the result as near-unanimous as it seems.

Although a majority of members of the Catalan parliament have stated they are in favour of independence, referenda leave it to everyday people to make the big decisions – and there are plenty of Catalans who do not want independence from Spain.

Indeed, the Centre d’Estudis d’Opinió (CEO, Centre for Opinion Studies) regularly conducts polls to study public attitudes toward the region’s status in Spain, wherein Catalan citizens had persistently been more likely to prefer Catalan to continue being an autonomous community or become a federal state up until 2012, when the formation of an independent state became the most popular option. However, the number of people who would prefer Catalan to be an independent state has never exceeded 50%, with the combined total of people either favouring a federal state or an autonomous community often exceeding the amount of people who want to see the region become independent. 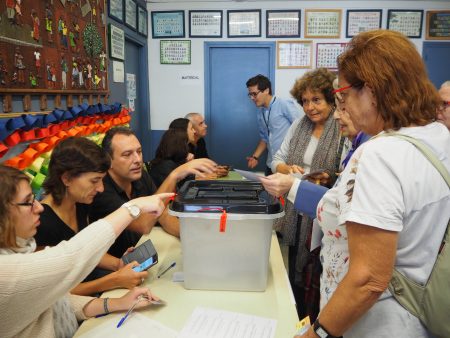 Studies conducted by Politico also conclude that low-income families, and Catalans who live in cities, are less likely to be in favour of independence.

Why does Catalonia want independence from Spain?

There are significant economic reasons for the pro-independence attitude some Catalans hold. Despite taking up only 6% of the country, the region accounts for 20% of all of Spain’s economic output. Being one of the wealthiest regions of the country, Catalans also pay a high proportion of tax, over one-fifth of the national total.

“there has been a resurgence in the Catalan national identity”

Many independence voters believe that this money is not significantly re-invested in the region’s infrastructure, living conditions and other aspects of life.

These are valid claims, but the nationalistic tendencies cannot be ignored. From 1939 up until 1975 Spain was a military dictatorship under Francisco Franco, who suppressed regional identities to create a more cohesive national identity. During these terrible years significant aspects of Catalan culture, including the usage of its language, were subdued, and since then there has been a resurgence in the Catalan national identity, with a 2006 referendum aiming to expand Catalonia’s authority also proposed pushing Catalan to once again be the region’s primary language.

No doubt the violence enacted by the authorities and Spanish police – almost 1000 people were injured on 1st October – will only serve to boost Catalonia’s nationalistic tendencies and push people further away from trusting the authority of the Spanish government.

What is happening now?

Pro-independence Catalans have persisted in protesting the Spanish government’s activities post-referendum, to no avail. On 2nd November the Spanish High Court granted a request to jail eight former members of the Catalan government without bail. Spain has also issued an international arrest warrant for Puigdemont, who is believed to have fled to Belgium after facing charges of sedition and rebellion. The total sentence Puigdemont faces carries a sentence of up to 30 years on conviction.

According to deputy editor of the Catalan pro-indepenence Nació Digital, these suppressive acts could turn into “electoral dynamite”, as secessionists are opportunistically seizing on these convictions to add weight to the Catalan cause. However, despite pro-independence campaigners’ calls for European intervention, no member of the EU has recognised Catalonia as an independent country, and the EU has said in no uncertain terms that should the region become independent, it will have to re-apply for EU membership, a process which can take years.

This reliance on the EU is one of the factors playing in anti-independence sentiments, with concerns about Catalan’s dependence on Europe, as well as Spain.

In the midst of all the uncertainty, banks have been moving out of Barcelona and into other regions in Spain. The region is currently under direct control of the Spanish government.

However, it is clear that despite Spanish suppression, pro-independence Catalans will keep on fighting, with Marta Rovira of the Catalan Republican Left Party stating “I’m convinced that we won’t surrender”. British journalists have defended the region’s claim for independence, and celebrities are using their fame to generate more awareness about the cause.

Manchester City manager and former Barcelona FC player Pep Guardiola said “I think that the Spanish government and the Catalan government should sit and talk and try to agree a referendum”, and it does seem like the only way this political stalemate will be resolved will be if both authorities decide on a legal way to decide once and for all how to appease both pro-independence and anti-independence Catalans in a fair and democratic way.

However, with its persistent insistence on the inability of any region to secede it seems that the internationally-supported Spanish government won’t give Barcelona much of a hand, and the most zealous of those who are pro-independence might continue to insist on their stance. Indeed, Puigdemont has called for a united political front to continue the drive for the region’s independence, despite the low turnout to the polls on 1st October.

It seems that Spanish and Catalan authorities won’t stop bashing heads anytime soon, both using their own definitions of democracy to justify their respective viewpoints. Spain says secession is illegal, Catalonia claims independence is their right, and fuelled by the Spanish government’s suppression of the referendum, which to many will emotionally evoke the suppression the region faced under Franco’s regime, this pro-independence fervour may only grow in strength and determination until at last a solution or compromise is made.

Why are the promoted teams doing so well?