As 'Movember' comes to a close, Impact presents their choices of the best facial hair in film

As November comes to a close, some of you may have noticed the expected increase of “in your face” facial hair on the men on and off UoN’s campus. The reason behind it all is the yearly tradition of Movember, a way to raise awareness and funds for the men who fall victim to prostate/testicular cancer. While many do it for the fun of it, or maybe an excuse to not bother shaving, Impact wants to show their support by showing off some great facial hair stylings throughout cinema.

What makes a good beard a great beard is a pair of complementary eyebrows. Nowhere in cinema is this more obvious than upon the wizened face of Pai Mei, the kung fu master and elderly misogynist who takes on the role of martial arts instructor to Beatrix Kiddo (Uma Thurman) in Quentin Tarantino’s Kill Bill: Volume 2. Played by Chinese actor Gordon (Chia-hui) Liu, Pai Mei sports a pair of huge, spiked white eyebrows, shoulder-length sideburns and a beard-moustache combination so long that he frequently has to swipe it petulantly over his shoulder when it gets in the way.

The effect of such ludicrous facial hair is that it only increases his sense of martial arts majesty. This is the man who can punch through concrete, stand on a sword held horizontally in mid-air and perform the infamous Five Point Palm Exploding Heart Technique without breaking a sweat. A figure like this needs a decent beard and eyebrows (indeed his name translates as ‘White Eyebrow’ in Mandarin). Granted, Pai Mei is also insufferably arrogant. But when someone has mastered brows of such magnitude, perhaps that is forgivable…

The Martin Scorsese-Robert DeNiro collaboration is one of the greatest director-actor collaborations in cinema history – it’s astonishing that they could reinvent a genre or even an industry with just eight films. However, considering those eight films include such titles as Raging Bull, Taxi Driver and Goodfellas, it’s understandable that the more obscure among them could remain unknown.

One such oft-overlooked movie is their 1982 fan culture satire The King of Comedy, about a wanna-be comedian’s obsessive pursuit of stardom; perhaps one of the reasons it is commonly forgotten is its subject matter, unusual compared to the gaggle of gangster films to which it belongs. Nevertheless, The King of Comedy should be considered among Scorsese and DeNiro’s best, not least because of its deliciously dark tone, fantastic casting and its risky choices (an important female character! Who is unlikeable! 34 years before Fleabag made unlikeable female characters more mainstream!) 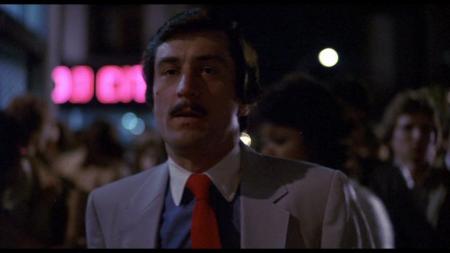 DeNiro as Rupert Pupkin, maintaining his small sliver of a ‘stache

However, one of the best things about the film is its protagonist: Rupert Pupkin (DeNiro). Like any authentic, well-developed character, the audience can tell that Rupert Pupkin is a fully fleshed-out person within moments of meeting him. His bold suit choices emphasise the larger-than-life persona that he strives to maintain in public. His name – or rather, the constant correction of mispronunciations regarding it – acts as a constant reminder that he exists in a limbo between a fantasy in which everything works as he wants it to versus a paralleling harsh reality.

But the aspect that truly ties this character together is his moustache. The pathetically stubborn yet meticulously groomed moustache matches the pathetically stubborn yet meticulously groomed man upon which it resides. Compared to the bare upper lip of his idol, played by Jerry Lewis, Pupkin’s moustache symbolises his incessant need to prove himself – and the tragic paradox that that creates. To try to be cool immediately negates the cool – and Pupkin’s moustache really tries.

If you want something more flamboyant than your average facial hair styles, look no further than the Gamesmaker of the 74th annual Hunger Games. Seneca Crane’s beard in the film version of Suzanne Collins’ dystopian story steals the show when it comes to facial hair, far outclassing President Snow’s rather bushy appearance.

The neat swirls highlight the quirks of fashion in the Capitol, and it comes across as both professional and stylish, perfectly appropriate whether you’re attending a ball, leading a meeting, or directing the murder of children via a holographic computer system.

Seneca pulls off the look incredibly well, so it’s sort of a shame he’s forced into suicide at the end of the film. The devastating result only means we don’t get a return of the beard in the later films, either in its original form or an updated version to fit with the rapidly-changing fashions of Capitol life. Think of the untapped possibilities!

There comes a time when every man has that desire to grow what facial hair he can, be it a bit of patch or full-blown grizzly. As someone who has no issue with growing a moustache/beard, I can’t but admire the “simple man’s” beard. In the film, Nocturnal Animals, directed by Tom Ford, an ongoing icon within the world of fashion, Jake Gyllenaal plays two different versions of a man – one young and slightly lost and, the other, fictitious and pushed to the edge of brokenness.

The beard Jake maintains through what could be fifty percent of the scenes is one of simplicity, no fanciness in sight. What is most interesting though is the defiance of character on how society might prefer a man with a thick beard to act. At first glance, you see Tony Hastings (Gyllenhaal) as a burly man with thick Levi jeans, boots, flannel button up shirt and a big manly beard. When events go sour, you’d expect Tony to step up, be the “strong man” he appears to be, but instead, he’s weak.

Without going into a long and in-depth discussion of what society expects men on how we should act based on our appearance, it goes without saying that Jake’s beard is purely fantastic. As a result of Movember, a majority of us have decided to grow it all out, either for the joy of it or making a bold statement (via moustache) on behalf of what Movember is all about. If you’re someone who can either grow it all out, just a bit here and there or one who admires merely any facial hair on a man, I’m sure we can all appreciate these pickings.

Make sure to show your support by spreading the word, sporting a moustache, donating or even all three! For more information on the origins of ‘Movember’, click here!

The Affordability of UoN Sport and Fitness: A Response