Unless you’ve been living under a rock for the past fourteen or so years, its a given that you’ve heard of The Killers. The four piece from Las Vegas have gifted the world not just singalong anthem ‘Mr Brightside’, but ‘When You Were Young’, ‘Smile Like You Mean It’, ‘Human’ and many many more. It’s a rarity for bands on the same global scale as The Killers to play Nottingham, so imagine my delight when two weeks before the show, and after a frenzied dash with my bank card, I managed to get two late release tickets. And the show, of course, didn’t disappoint.

After soulful support act Juanita Stein had left the stage, the tension in the arena was palpable, with every roadie walking across the stage getting a cheer in the hope it would be ‘The Man’ himself, Brandon Flowers. When he finally did appear, along with original member, drummer Ronnie Vannucci Jr, the crowd quite literally went wild. Opening with the title track from their new album, Wonderful, Wonderful, this haunting song was a atmospheric start to the show. Following this and with a burst from numerous confetti cannons, was ‘The Man’, where frontman Flowers really came into his stage persona, much to the delight of those in standing as he gyrated before them.

“…leaving [us] sweaty, hot and begging for more”

Familiar hits such as ‘Somebody Told Me’ and ‘Spaceman’ followed, with Flowers demonstrating his powerful vocals and leaving the audience hoarse through showing their appreciation. With hits from the new album including ‘Run for Cover’ and ‘Life to Come’ getting a great response from the crowd, it was inevitable that ‘Runaways’, ‘A Dustland Fairytale’, and closing tune ‘All These Things That I’ve Done’ made their mark, leaving myself and those around me sweaty, hot and begging for more. Instead, The Killers left the stage…only for Flowers to return in a dazzling gold suit and sunglasses combo for the encore, featuring tracks ‘The Calling’ and ‘Andy You’re a Star’. 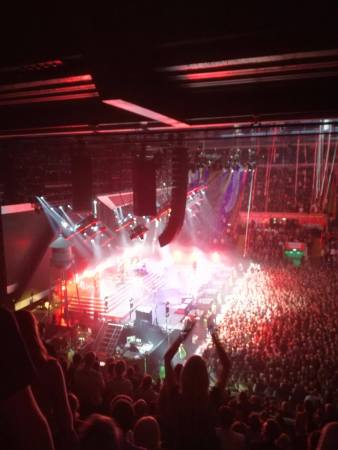 Before the audience knew it, the band were onto their final two songs, with Flowers declaring he was ‘picking up the pace’. Sam’s Town favourite, ‘When You Were Young’, was eagerly received, and literally every single person in the packed arena were on their feet and going absolutely wild for ‘Mr Brightside’. Even the elderly couple in front of me were giving it some welly.

As the show came to its conclusion, the band staying on stage far later than scheduled, I, and those around me, knew we’d seen a legendary gig. With drummer Vannucci having the final say, to ‘drive safely…and tell all your friends!’, the lights flicked back on and the confetti began to settle. But the arena was still buzzing with the joy of what we’d all seen onstage, as proven by the perhaps slightly tipsy ladies singing ‘Brightside’ (badly) in the foyer.

“Their joy in performing was clear to see”

And that is part of the beauty of The Killers – their appeal is for all ages, and their music is timeless. Fourteen years after their first show in Nottingham, Flowers dedicated ‘A Dustland Fairytale’ to a couple who were in the arena that night, but who had been there from the beginning, who had supporting the band since that first gig in Rescue Rooms so many years before. The humbleness shown by Flowers as he told the crowd that it was Thanksgiving in America, but the band were also giving thanks for our support was truly touching, and their joy in performing was clear to see.

Perhaps the only downside onlookers may have found was the lack of original band members, Dave Keuning and Mark Stoermer, both of whom have quit touring with the band, despite their continued involvement in producing records. However, their absence was certainly not missed, Flowers and Vannucci providing more than enough energy and charisma to drive the gig to its unforgettable climax.

With dates in London still left on this tour, if you get the opportunity to see The Killers live then go. If you have the extra hour to spare after the gig then wait. Flowers and Vannucci both came outside afterwards and posed for photos and signed merchandise for fans (myself included! Fangirl level 110%). For a ‘Wonderful, Wonderful’ night, you know the place to be.

UFC Shanghai Bisping vs Gastelum: How is this happening?