UFC Shanghai Bisping vs Gastelum: How is this happening? 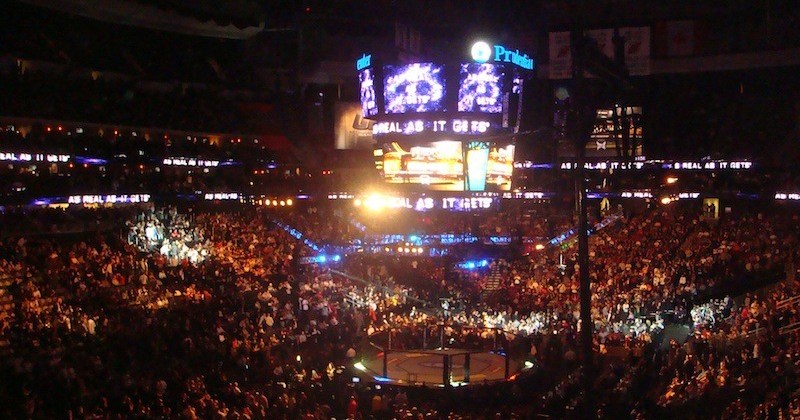 When Michael Bisping steps into the cage in Shanghai on Saturday night it will be 3 weeks since he lost his UFC middleweight title to Georges St. Pierre. In this fight he was knocked down and choked unconscious. Then a week later news broke that Anderson Silva was facing a violation of the UFC’s anti-doping policy and Bisping, ever the company man, stepped in. The real question here is how on earth a man can be knocked down and finished one week, and then step into the cage against a harder puncher three weeks later?

On the one hand, it is understandable why Michael Bisping would want this fight. He will want to wash the taste of his loss to St. Pierre out of his mouth as quickly as is humanly possible. However, this is a man who has been dropped in 3 of his last 4 fights, with fortuitous timing and opponents saving him on two of those occasions. This is also exactly how fighters in the past have gone on depressing streaks to finish their career, looking for one final win to go out on. He is now going to be facing off with Kelvin Gastelum, the youngest of those opponents with the best combination of speed and power, without any specific training or all that much of a layoff. Even his main coach Jason Parillo has admitted that this is a tougher contest than that against “GSP” in a fight that will likely take place almost entirely on the feet.

“His only loss was due to the relatively vast size discrepancy”

Gastelum is a man who would likely be in contention for the UFC welterweight title if he had been able to make the weight reliably. Instead he was forced by management up a division after failing to even make it to weigh ins last November at UFC 205, where he has gone 1-1 (1 no contest) with both his win and the no contest originally being via TKO. His only loss was due to the relatively vast size discrepancy he faced against a strong wrestler and grappler in Chris Weidman, who after taking the fight to the ground was able to exploit this to find an arm triangle choke for the submission.

His other two fights however show off his excellent hand speed and solid power for the division in largely dominating Tim Kennedy over three rounds on the feet and blitzing Vitor Belfort for a quick win before cannabis metabolites were found in his system. This is not exactly the kind of opponent you would like for a man who was recently knocked down due in part to the hand speed of a former welterweight with lesser power than Gastelum.

“He was given an initial 30 day medical suspension”

This is where some form of authority should be stepping in and preventing Bisping fighting for his own safety. He was given an initial 30 day medical suspension from the NYSAC, however following an MRI this was removed. These medical suspensions are all advisory and subject to doctor clearance but this seems like a time where being firm would be advisable. Bisping was also contacted by the UFC legal team to check how he felt and they took his word for it that he was fine. This is not the greatest of signs as the UFC were in dire need of someone with a marketable name to take over from Silva in their first event in mainland China.

“This inconsistency would be consistent with the UFC overlooking concerns”

This is the same organisation that recently pulled Mark Hunt, who is suing the UFC over fighting Brock Lesnar in a contest where Lesnar tested positive, from a fight in Australia after a first person interview where he admitted to symptoms of brain injury. This inconsistency would be consistent with the UFC overlooking concerns with fighters or potential fights if it would help them make money.

"I'm one of the greatest Mixed Martial Artists that ever lived. It's as simple as that."

On top of whether this is a matchup that should be happening right now due to Bisping’s recent loss there is also the question of whether this should happen full stop. Bisping has said that he would like to retire after a fight in London next March. Gastelum on the other hand is in his fighting prime and is looking to make a run at a title shot at either 170 lbs or 185.

Most worrying of all is that Bisping for the past few years has only had one functioning eye, a fact which St. Pierre basically admitted to exploiting in their fight. This means that Bisping is more susceptible to strikes coming from his right hand side, and already had a propensity to circle into his opponent’s power shots. This is rather obviously a negative when it comes to facing the southpaw Gastelum especially considering the speed with which he strikes.

“We will probably see Gastelum take another legendary scalp”

Without Bisping’s history of being a company man and his desire to bounce back straight away, the smart thing to do would have been to wait and find another pillow-fisted middleweight who was unranked for him to proceed to an easy decision win over next March and walk away on top. Unfortunately we will probably see Gastelum take another legendary scalp and Bisping lose his grasp on consciousness again, in a much more violent fashion than the last time, before finally walking away from competition in his home country next March.

What does the Budget actually mean for us?