Cara Delevingne, at the age of only twenty-five, is one of the most recognisable (and sought after) faces in the British fashion industry. Delevingne has been modelling since 2011, when she was signed by the same agency that scouted Kate Moss: Storm Model Management. In her early career, the teen never seemed to stop. However, following her decision to pursue her acting aspirations, she disappeared from the fashion industry for a long time. However, following her 2016 tweet ‘I never quit’, the young star has taken centre stage of the fashion world once again.

In 2011, Cara walked for Burberry during London Fashion Week at only twenty years old. Just a year later, she was a Victoria’s Secret Angel.

The very same year, Delevingne was named Model of the Year at the British Fashion Awards, an award she won again in 2014. These two years were undeniably her busiest in the fashion industry, seeing her grace the covers of Vogue Britain, China, Portugal, Japan and Australia.

However, just over a year later, her modelling days came to an abrupt end, as she wanted to follow her true passion – acting. Taking a step back from fashion, (aside from a couple more Vogue covers and a runway walk for Chanel), Delevingne landed the role of a mermaid in fantasy film, Pan. She then made her Hollywood breakthrough, being cast as Margo in 2015’s Paper Towns, a year before playing the enchantress in the acclaimed film, Suicide Squad.

In 2016, Cara finally opened up about why she had left the modelling industry, speaking publicly about her mental health struggles, particularly that of depression, something she has suffered from on and off since her early teenage years. She told TIME Magazine about the way she never felt ‘genuinely happy’ modelling, and acting is what she really enjoys. Later in 2016, she tweeted ‘I never quit’, a statement preceding her being the new face of Saint Laurent’s La Collection De Paris. This reversal of her previous statement is because the model-turned-actress now sees modelling as a ‘creative outlet, instead of me (her) being used as a pawn.’ 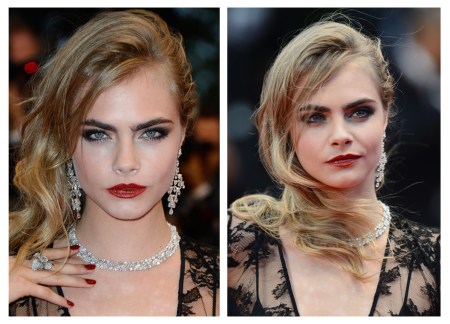 2017 marked her biggest acting break yet: taking the lead role of Valerian in Valerian and the City of a Thousand Planets, critically claimed to be one of her best performances yet.

Just a few months later, Delevingne shaved her head – much to the dismay and against the wishes of her modelling agents and managers – for her part in the forthcoming drama, Life in a Year, in which she will play a cancer-stricken woman with one year to live.

“Cara Delevingne is one of the best role-models of today”

Not only this, but she visited Uganda on a humanitarian mission to support the campaign ‘Girl Up’ and the UN’s refugee programme. Undeniably, therefore, Cara Delevingne is one of the best role-models of today, refusing to conform to the confines of the fashion industry, always emphasising how important it is to stay true to (and be) yourself. It seems she is a girl that can do everything (I forgot to mention, she can sing and play the drums as well) and will stop at nothing to find happiness for herself.

If fashion is your thing email us at lifestyle@impactnottingham.com.

Palestinian Paradise: Too good to be true?