“The battle for places is on” says Osborn, as Karanka looks to bring “loving feeling” home

“The battle for places is on”, according to Ben Osborn, who recently spoke about competition amid the Forest ranks ahead of Birmingham City’s visit to a snowy City Ground.

The midfielder-turn-left-back says he and his teammates are “desperate” for Saturday’s game to go ahead, as heavy snowfall draws question marks over the possibility of playing on the City Ground pitch. 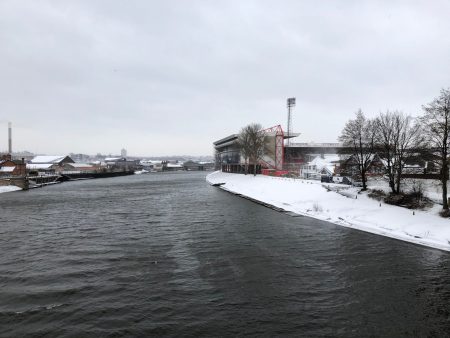 A snowy City Ground on Thursday afternoon after Forest held their pre-Birmingham presser.

Osborn is on track to make nearly 170 appearances for Forest come the end of the season in just the fourth full campaign for the 23 year old. His accelerating career has seen him fill numerous roles around the pitch over that time; starting in his more natural centre-midfield role, to moving onto the wing and even further up the pitch in a central attacking role for a brief spell under Philippe Montanier.

Now under Aitor Karanka, the ninth first-team boss the academy graduate has worked with, Osborn finds himself playing on the left side of defence. A flurry of January acquisitions in the transfer market has seen Osborn met with the strongest competition for playing time he has experienced so far in his professional career.

Essentially an ever present since his debut, it now seems realistic, even sometimes sensible, that the hard-working and talented youngster might not get into the Forest first-XI. His poor performances are scarce to say the least, but his versatility, ability and attitude has allowed him to capitalise on the absence of full-back Eric Lichaj when it seemed that midfield pairing Jack Colback and Ben Watson might have pushed him to the bench.

“I wasn’t happy with my performance.”

Osborn himself pointed to a rare bad game for himself against Hull, which saw him on the bench in the subsequent trip to Burton – where right-back Eric Lichaj would be issued with a suspension. The timing was apt for Osborn, as Colback and Watson cemented themselves in midfield whilst Tendayi Darikwa came back into the fray on the right; Osborn would return to the line-up and put into two typically solid displays at left-back against reading and QPR.

“There’s a lot of competition now. Most weeks there’s five or six who aren’t even in the squad – good pros that could get into numerous championship clubs.

“The battle for places is on. Personally, I played against Hull and didn’t do great, I wasn’t happy with my performance. I found myself on the bench against Burton, but you take it on the chin. Since then I’ve had my chance at left back and I think I’ve done okay the last couple games, so hopefully I can just stay in there.”

Osborn, for now, is happy to be playing anywhere amid tough positional competition, but with Eric Lichaj and Juan Rafael Fuentes about to push him further, he has his eyes set on his traditional place in the centre of the park:

“Ideally, I’d like to try and work my way back into the midfield. But I’ve gone through a few scenarios in my head, and what I’ve come up with is to play as good as I can at left-back, and when the returning left-back or Eric [Lichaj] comes, I’ve played well enough for him [Karanka] not to drop me so I might get back into midfield.”

'But baby, baby I know it…'#NFFC manager @Karanka spoke today ahead of Birmingham City's visit to the City Ground ?? pic.twitter.com/GsMcge0wkx

Aitor Karanka said that his players feel “they can stay in the team if they get the chance” to play, with several of the squad knocking on his door enquiring about playing opportunities. With competition getting healthier, confidence is also ripening in the changing room, something that Karanka believed justified the approach which as typically seen him been labelled as a ‘defensive’ manager, in particular by QPR boss Ian Holloway in the past:

“It is true also that he said I had the job in Middlesbrough because I had spent ten minutes with Mourinho. I’ve beaten him 5-2, 5-1, 4-0, so for a defensive manager it’s not bad.

“I try my best. The most important thing is that the people who support us can go back home thinking that they have a good team and their players are doing their best every single game. We will have games like Reading where we shoot sixteen times and we score one, and we are going to have games like QPR where we score five goals. We just have to build the team, be consistent, because when you have the quality goals will arrive.”

“Of course [I want to entertain]. But when you are more confident is when you don’t concede goals.”

The Spaniard would be quick to bat away complacency, but Birmingham does (on paper) seem like the ideal team to face for a team wanting to kick-start a run of form like Forest. The Blues have failed to keep out a City Ground attack in every visit there since 2001, totalling 18 attempts. They have the second-worst away record in the Championship this season, collecting 10 points on the road, whilst Karanka has never tasted defeat to the Blues in six Championship outings.