Deborah takes a look at the Academy Awards's recent track record with diversity, and asks whether there is a change coming...

This year’s (slightly belated) Oscars are almost upon us! For me, this usually means finding something yellow-goldish to wear, getting my friends to come over, and eat inexcusable amounts of popcorn until four or five in the morning.

While all these Oscar rituals that I have going are mad fun as they are happening, before the party starts I never can help but think about the format I’m watching, and who gets to decide who is taking home the golden statue.

FYI, the voting process deciding who takes an Oscar home is long; there are over 6,000 voting members, deciding between hundreds of submissions, which fit into a strict framework of rules. But who are these people deciding? Most of them are, surprise surprise, white males, average age 57. In fact, in 2016, a whopping 91% of voters were white. 76% were male. And what are they typically voting for? You guessed it: mostly white people, mostly males.

“in 2015 and 2016, not a single actor who was anything but white was even nominated for the acting categories”

Let’s do some number-crunching: from 1928 to 2015, women who took home an Oscar for the ‘Best Actress’ category were 98.8% white. Of the male ‘Best Actor’ winners, 93.2% were. In 1950, Jose Ferrer was the first non-white actor (he’s of Spanish descent and was born in Puerto Rico) to be nominated and win an Oscar for Cyrano de Bergerac. The first Black actor winning an Oscar as lead actor was Sidney Poitier in 1963; after that it took 38 years for Denzel Washington to follow in his footsteps. The first African-American lead actress to win was Halle Berry in 2001.

To round these statistics off, in 2015 and 2016, not a single actor who was anything but white was even nominated for the acting categories. As a result, in 2016 we saw #OscarsSoWhite trending on social media. 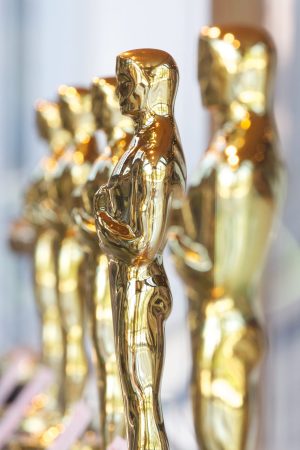 2016: Look at how diverse these Oscars are! Just as different as their winners!

Last year, La La Land (arguably the whitest movie ever made) was mistakenly announced as ‘Best Movie’ before the error could be detected. Most media coverage subsequently revolved around this faux pas, yet the fact that Moonlight won was a massive milestone in Oscar history that was far less reported. A lot of people found this ruined Moonlight’s moment in the spotlight as the first film with an all-Black cast to win the prized top spot.

“Last year … for the first time, actors of colour were nominated for every acting category”

In 2017 it wasn’t so bad: Hidden Figures, Moonlight, and Lion among other films with diverse casts and crews won, and a total of seven non-white actors took home a statue, something that hadn’t happened since 2007. For the first time, actors of colour were nominated for every acting category. Nine films dealing with non-white subjects were also nominated, a historical high.

Continuing the trend this year, there is an astonishing number of multi-ethnic actors and artists among the nominees, including Daniel Kaluuya for Get Out, Denzel Washington for Roman J. Israel, Esq., Mary J. Blige for Mudbound (which also has been nominated for a number of other categories, most importantly Rachel Morrison as the first female to be nominated for Cinematography), and Octavia Spencer for The Shape of Water. The key question is if this year’s more diverse set of nominees will remain nominees, or if we’ll see a few winners of colour.

The second question is, if the winners are more diverse this time around, is this a real change in the industry? Will more ethnically actors, directors, editors, composers, and other set staff find their way into Hollywood, and be recognized for their achievements? Or will Hollywood temporarily celebrate its alleged diversity before falling back into the old rut of casting and employing mainly white people all over again? (On a similar note, does a film like Black Panther have the power to change the industry?)

I guess time will tell. I know I will be glued in front of the screen Sunday night, keeping my fingers crossed. Crossed for an industry that reflects society as it is, an industry that doesn’t shy away from diversity and representation, an industry that celebrates backgrounds rather than denouncing them. We’ll just have to wait and see.

Featured and article image courtesy of ‘Marcin Wichary’ via flickr.

“The battle for places is on” says Osborn, as Karanka looks to bring “loving feeling” home