Film Review: The Shape of Water 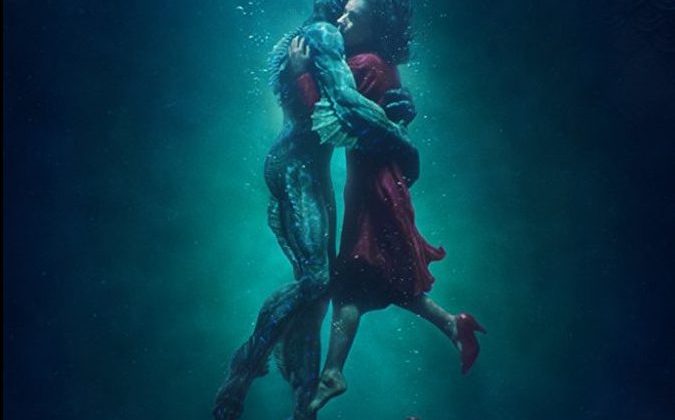 The Shape of water has created a huge buzz this award season, winning Best Film Music and Best Direction by Guillermo del Toro at the BAFTAs, and is up for the most nominations at the Oscars including Best Female Lead and Best Film.

From the very beginning of this tale, you can see why it is so critically acclaimed and recognised as a film that stands out from the rest. The opening scene follows the daily routine of our protagonist, Elisa Esposito, played by Sally Hawkins. The elegant, orchestral music score played over the opening montage, paired with the warm tones of colour applied by the camera filter, sets up the quirky and artistic style that runs throughout the film.

Elisa is a mute cleaning lady in an underground government laboratory during the Cold War, and spends most of her time with her close friend and neighbour, Giles (Richard Jenkins). When a mysterious creature is brought to the lab from a South American river, Elisa steps out of her comfortable, regimented life and begins to visit the monster without consent.

Neither of them can communicate verbally with each other, which in fact leads them to form an unconditional bond through an unspoken, mutual understanding of two outcasts that see each other for who they are and not for their differences and imperfections.

Sally Hawkins does a phenomenal job of portraying Elisa’s feelings of anguish and loneliness, and how it suddenly disappears in the presence of the creature, which is even more impressive considering that the mute character never verbally utters a single word.

Despite the creature’s gruesome fish-like appearance, Hawkins’ performance completely justifies their relationship and leaves the audience rooting for them all the way, with their affectionate and even sexual relationship being somehow difficult to see as strange or taboo.

“The dream-like setting is established through the constant music”

The whimsical world that this film is set is far enough removed from our own, which also allows the audience to accept their relationship and be genuinely moved by it. The dream-like setting is established through the constant music that glides seamlessly between the scenes, and the green hue that is present throughout.

Green even becomes a motif within the plot, with numerous references to the colour, which can be seen to represent Elisa’s former clinical life, as after she becomes intimate with the creature she instead dresses in red, to show how she has come alive and escaped the ordinary world and the poisonously judgemental society that the rest of the characters seem trapped in (that’s my interpretation, anyway).

The sincere relationships between the various characters is actually what makes this film so special and gives it such depth. The cherished friendships that Elisa has with Giles, and with her witty and wise work colleague (Octavia Spencer), seem truly wholesome as they both appear to greatly care for Elisa through their constant display of moral support.

The plot intensifies as the three friends team up for quite a comic scene, where they set out to steal the creature from the lab and the people that want to use the creature as a possible advantage in the war. The rest of the film depicts the drama that unfolds in Elisa’s bid to save the creature, with Elisa keeping him in her bath until the water in the nearby canal rises enough for it to open out to the ocean, so the creature can be taken there to escape.

The audiences’ inevitable internal conflict from wanted the canal to fill up before Elisa gets caught by army officials, and wanted Elisa to have more time with her beloved amphibian, is almost too much to bear. The heavy rain sets a sombre tone and serves as a menacing hourglass looming over the final scenes, as we know they will soon have to part, but leaving audiences hoping for a way that they can stay together.

This is a fairy-tale for adults, with the stylised elements truly complimenting the magical and unusual plot, making it infectiously heart warming while still being subtle in its delicate execution. Everything works, the film never seems confused or rushed, and instead effortlessly takes us on this humble journey, about a girl and a miracle.

Image and media courtesy of Bull Productions and DDY

The problem with how we view mental health