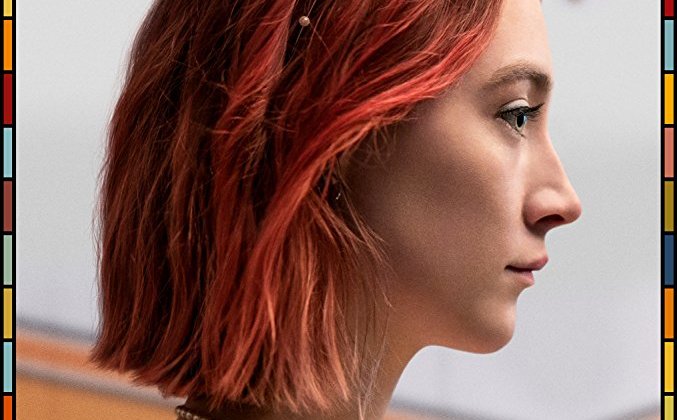 Vibrant with the warmth of youth whilst still unabashedly honest, Greta Gerwig’s debut feature, presents the anxieties of adolescence, the impossible task of parenthood and the ever-looming presence of the future in a truly brilliant coming-of-age drama.

Just like previous Oscar favourites 2014’s Boyhood and last year’s Moonlight, Lady Bird examines adolescence in a frequently fraught and uncertain modern world. Unlike those two however, it approaches the 21st century coming-of-age experience from a female perspective.

Greta Gerwig’s debut feature, after a prolific acting career in the American indie scene, follows 17-year-old Sacramento native Christine McPherson (Saoirse Ronan), or as she elects to be called, “Lady Bird” ’s, final year of high school: her dreams of attending prestigious art schools in New York, a series of reactionary, anxiety laden identity crisis, the pitfalls of young romance and most absorbing of all, her turbulent and complex relationship with her attentive yet at times imperious mother (Laurie Metcalf).

At no time however does Lady Bird feel banal or cliché, Gerwig, in what has to be at least a semi-autobiographical script, aims for realism and honesty, capturing them both with razor-sharp accuracy. One of the movie’s greatest strength is its supreme depth of character and the world Gerwig manages to create in only 90 minutes. Every character no matter how small, has a story embedded within them, each of which could well be a movie in their own right.

Similarly, each character we encounter along the coming-of-age narrative Gerwig has designed is also unabashedly flawed in their own way. Lady Bird for instance, has dreams of being an actress and moving to the east coast “where writers live in the woods.” She is refreshingly untalented, being handed non-speaking parts specially created for her in her Catholic School’s drama society’s termly productions.

Her mother and main adversary for much of the film has similar faults; a hard-working nurse whose hidden inner fear of her and Lady Bird’s impending separation frightens her to the point of acrimony towards her daughter. Gerwig, with all the skill and sensibility of a film school graduate conveys this anxiety in a masterful sequence of Lady Bird’s mother driving around Sacramento’s open roads, passing physical manifestations of separation; rivers, bridges and looming buildings whilst John Hartford’s “This Eve of Parting” plays delicately in the background.

As the emotional crux of the entire narrative, the volatility that bodes between mother and daughter is exemplified in an early sequence in which seconds after finishing an audio tape of John Steinbeck’s “The Grapes of Wrath” which has left them both in tears, they quickly become embroiled in a heated conflict about college which ends with Lady Bird melodramatically throwing herself from their moving car.

The dynamic intensely established in this opening salvo continues unhindered throughout, with the pair acting as truly titanic equals, landing and taking impassioned punches with parallel ferocity aided by fantastically natural and impacting dialogue. Gerwig lays bare for the audience to see the pair’s respective anxieties; her mother’s fear of impending separation; Lady Bird’s yearning to be loved not only by her mother but those around her. Gerwig erects an emotional barricade, born out of headstrong and stubborn similarity, between them for much of the film.

The fire between the two characters is indebted heavily however to the actresses that portray them. In yet another Oscar nominated role (at just 23 years of age) Saoirse Ronan is electrifying, capturing the quirky desperation of a 17-year-old who is both yearns for and dreads escape with meticulous precision.

“Her character [has a] lack of dramatic skill”

An Irish born native her ridiculous ability to embody an American teen persona is brilliantly ironic considering her character’s lack of dramatic skill. Opposite her, Laurie Metcalf plays Lady bird’s mother Marion imperiously, perfectly hostile and overbearing whilst adding just enough tenderness to convey that it all comes from a place of unbridled care and worry.

The movie’s wider cast includes some of the biggest up and coming names in Hollywood including “Manchester by the Sea’s” Lucas Hedges and “Call Me By Your Name’s” Timothy Chalamet as vastly different yet atypical love interests as well as newcomer Beanie Feldstein as Lady Bird’s Jovial best friend.

Through raw, and at times heart-breakingly honesty Gerwig lays those final few months of adolescence exposed for all to see: love, independence, expectation. For a first sole directorial effort, Lady Bird is a knockout, vulnerable whilst quirky and yet a completely new entry into a crowded genre. The success of Gerwig and her film can only be considered vital to allowing more female directors to bring their stories to Hollywood’s sun drenched yet too often male oriented studios.

Film Review: The Shape of Water