Described as a “politically charged nod to 1920s Kaberett”, focus on this form ends up undermining the political messages of No Woman’s Land, and while the play (or more accurately, performance piece) retains a fingerfull of redeeming features, it is by and large an incoherent mess.

In 2015, Zoo Indigo – the theatrical two-piece Rosie Garton and Ildikó Rippel – walked 220 miles across Poland and Germany, retracing the route of Ildikó’s grandmother and children, who were forced to flee their home in 1945 in the heat of the Second World War.

“An indulgent showcase of Garton and Rippel’s rambles”

No Woman’s Land is not so much a dramatization of this historical walk as it is an indulgent showcase of Garton and Rippel’s rambles, with what looks like a YouTube travel vlog forming a near-constant backdrop to the action on-stage.

I hesitate to use the word ‘action’, because most of what happens during the 75-minute performance is semi-improvised (and therefore repetitive, and often dull) dialogue. Meanwhile, members of the audience are invited to walk on treadmills on-stage, in attempt to show that such a daunting journey can no way be captured by art – what the audience, who become in a way actors, experience is in no way comparable with what Ildikó’s grandmother went through. 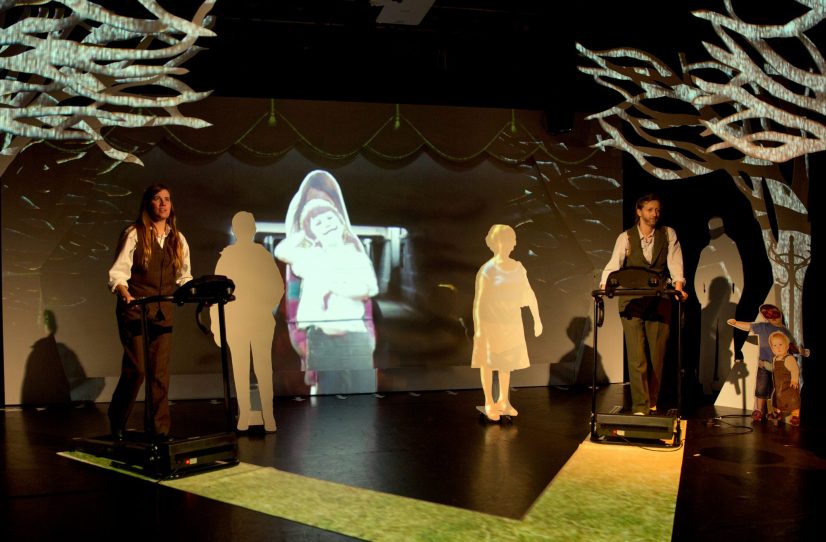 Embarrassingly, Garton and Rippel – who number the volunteers at the start of the performance – last night accidentally called out one pair of volunteers to walk on the treadmill twice, unfair to the unfortunate audience members who thought they finally had a chance to relax.

“Any true emotional response is quashed”

While walking, Garton and Rippel give anecdotes about events that may or may not have happened to Ildikó’s grandmother, though they do so in such an over-the-top and comedic matter that any true emotional response is quashed.

No Woman’s Land is by no means completely devoid of emotional moments, however. During their journey, Zoo Indigo encountered another German woman, whose account of what happened to her grandmother during the War (projected on-stage) is personal, heart-breaking and relevant – oddly, the actor-creators don’t manage to stir up so much emotion themselves.

I emphasise the ‘creator’ aspect; Zoo Indigo are by no means ‘traditional’ playwrights, and there are smart creative decisions throughout. At one point, Rippel monologues in German, with English ‘subtitles’ projected on the back of the stage, forcing the audience to concentrate on the words more than they might on over-acted speech.

“A caricature of contemporary theatre”

It’s a shame that the few moving moments on offer are intercut with ridicule, especially as a couple of the Kaberett-influenced musical numbers – which the pair pull of surprisingly well – might actually be amongst the highlights of the play. (The live music and sound effects, provided by Matt Marks, is always excellent.) Particularly potent is the dark humour of the sausage song, but by and large even the best of the burlesque contributes to the tonal mess that makes No Woman’s Land sometimes feel like a caricature of contemporary theatre. 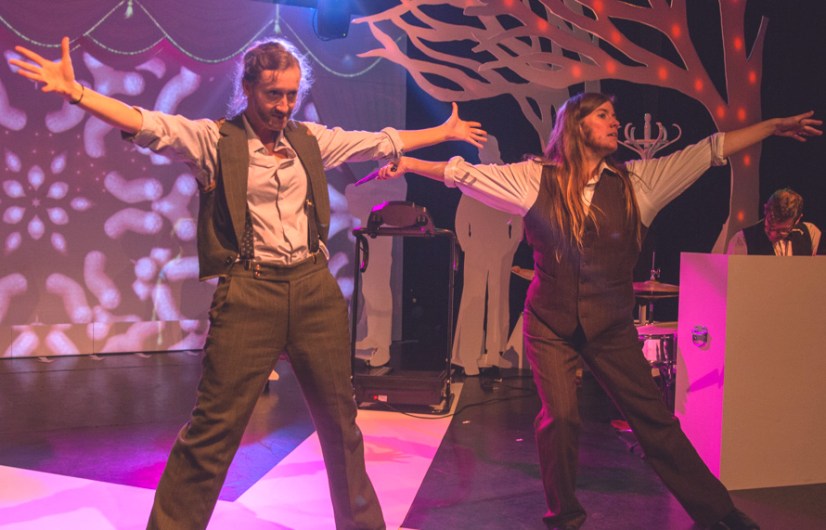 Instead of pursuing one of two directions (humorous musical not devoid of political messages, or straight-up feminist drama – the play focusses, rather graphically, on the often-overlooked experience of women and war), which would have made for a more cohesive watch, Zoo Indigo instead decided to mix these two clashing genres, stirring in an unhealthy dose of tedious filler to match. While sharp juxtaposition in theatre often enhances the dramatic and emotional moments, here the comedy (which falls flat as much as it hits) only serves to undermine the impact of the performance’s messages.