Women's football to be played behind closed doors and Ice Hockey to be a dry event in other Varsity 2018 changes.

The Students’ Union has confirmed that the Varsity football fixtures at Meadow Lane will be played behind closed doors, with the University of Nottingham men’s football team declining to play the fixture.

As a result, the men’s game has been considered as forfeited and the Varsity Series will begin at 1-0 to Nottingham Trent University (NTU). The women’s game will be played as normal.

The changes have been made following concerns raised during the 2017 Varsity Series regarding the behaviour of both spectators and players during certain fixtures.

“The SU has also confirmed that the Ice Hockey will be a dry event.”

A statement released by the Varsity Strategic Committee said:

All players and spectators are expected to abide by the Varsity Oath which demands individuals to uphold the true spirit of sportsmanship, respect for our opponents, the facilities and communities in which the competition takes place.

“Whilst these were incredibility difficult decisions, action had to be taken to safeguard the future of the whole series. This joint decision is focused on ensuring we have a safe environment and acceptable behaviour at Varsity.”

“The [University of Nottingham] has made it clear they are prepared to cancel Varsity, even mid-series.”

The Varsity Committee also noted the ‘professionalism in which the football clubs of both UoN and NTU responded to the changes’, and confirmed that all changes to the 2018 Series are final.

The SU has also confirmed that the Ice Hockey will be a dry event, meaning that no alcohol will be available to purchase at the Motorpoint Arena. Alongside this, for both the Ice Hockey and Basketball fixtures, block 10 in the seating area will be blocked out and not allocated to either set of spectators.

Alcohol will be on sale at the Basketball fixture, but will not be available courtside.

The review of Varsity fixtures began in response to incidents during the 2016 Varsity Series, which saw a behaviour management plan introduced to mitigate the risks attached to events within the series.

The plan’s introduction saw a reduction in incidents in the 2017 Series, but examples of inappropriate behaviour from spectators and players remained. At the close of the programme for 2017, the Steering group reconvened to debrief. It is as a result of this debrief that a number of actions have been taken.

In his statement accompanying the confirmation of the changes, Adam Pratchett, SU Sports Officer, said:

“We have seen a number of varsity series across the country be cancelled due to poor behaviour, and whilst as a committee we have had very robust measures in place for a number of years, poor behaviour by a minority of individuals has persisted at particular events.

To be clear, the future of Varsity is on a knife edge, and if there are any examples of poor
behaviour this year, by either spectators or players, the university has made it clear they are prepared to cancel Varsity, even mid-series.”

The SU also confirmed that significant changes were made to the football as a result of the ‘unacceptable behaviour’ at last year’s event despite ‘numerous warnings for a number of years both in online communications and at the venue itself.’ 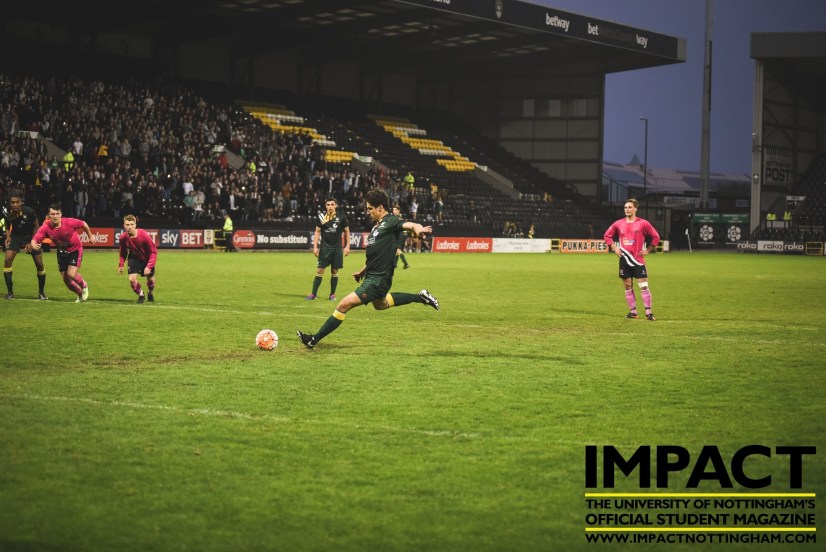 Due to the level of interest in the Varsity fixtures, and the nature of the Meadow Lane stadium layout, the SU said:

‘It was not possible to take significant enough mitigating action to reduce the risk of a pitch invasion to a level that would ensure the safety of all players and spectators.’

Frank Oxley, a fourth-year Law with European Law student, upon hearing of the changes, told Impact:

“As a someone that has always enjoyed the derby between NTU and UoN in the yearly Varsity series, the
decision to play the [football] fixture behind closed doors is hugely disappointing.

“The team undoubtedly appreciate and value the crowds we take to Meadow Lane. It is sad to see that the University’s men’s football team have taken this decision.

“I’m genuinely not happy with the decision. I believe it’s asepticising football. It’s patronising that we can’t be trusted. There’s always some poor behaviour and the Varsity has been maintained for a while, but why the sudden change with no consultation [with students]?
“It’s taking the raw spirit out of the game and of University rivalries.”

Follow @Impact Sport for more updates in the build-up to Varsity 2018.