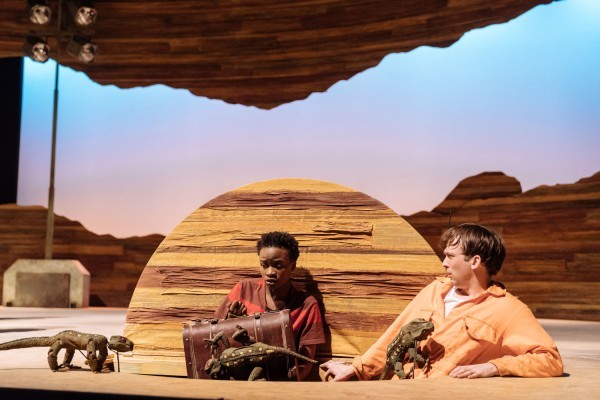 Stanley Yelnats is unlucky, a family trait which he puts down to his pig-stealing ancestor. He is so unlucky that he has been arrested for a crime he didn’t commit and sent to a camp from hell. What ensues is a magical, vibrant, almost fablelike adventure spanning over a hundred years reaching from Latvia to Texas.

Director Adam Penford takes Louis Sachar’s own adaptation of his beloved novel and creates a visually stunning, constantly changing, feel-good production that evokes the suffocating heat of Camp Green Lake and the vastness of the desert setting through an intelligent use of lighting (designed by Prema Mehta) and a fluid set (designed by Simon Kenny). Some of my favourite moments were when the scenes from the past and present seemed to be overlapping and crashing into one another and when objects and set-pieces remained on stage from previous scenes, illustrating how one event has caused the next. This led to some beautifully dissonant visuals being created that proved to me why this story should be put on the stage and not confined to the pages of Sacher’s original novel.

The actors were without exception brilliant, the American accents never slipped and every performer embodied all of their multiple characters so completely that at times I forgot the same person was playing lots of roles. It was very refreshing to see such a diverse company of actors being able to exhibit just how talented they are.

The play is marketed towards families and it is lovely to see a family show that isn’t a pantomime being put on such a large stage. I hope it will encourage more children to become engaged in the theatre.

There are some things which are clearly there to cater to this audience, such as the quirky but effective use of puppets to show the much-feared rattlesnakes and yellow-spotted lizards, yet it means this production has something that will appeal to anyone. I found myself in awe of the set and the use of the space at times, and at others merely revelling in the pure enjoyability of the play.

The script addresses an incredible breadth of topics for a show aimed at families, including relationships with friends and family, historical racism and sexism, and how the past continues to affect our lives. However, due to the subtle nature in which these themes are interwoven into the plot, I didn’t leave feeling as though the play had an overarching message.

Though not all theatre needs to challenge an audience’s core beliefs, and this was certainly incredibly entertaining, there were times where I wondered what the point of the play was. That is not to say that moments weren’t incredibly poignant but, in trying not to be preachy, the script may have been too implicit with these meanings for the younger audience members it attracts.

Regardless, Holes is a neatly crafted and witty play that is great fun to watch and highlights just how creative direction, talented acting and innovative set design can combine to make a thoroughly enjoyable performance.